Home » Archive » Top News » Arizona Commission Meeting: 'The Eyes Are On Us'

Arizona Commission Meeting: 'The Eyes Are On Us' 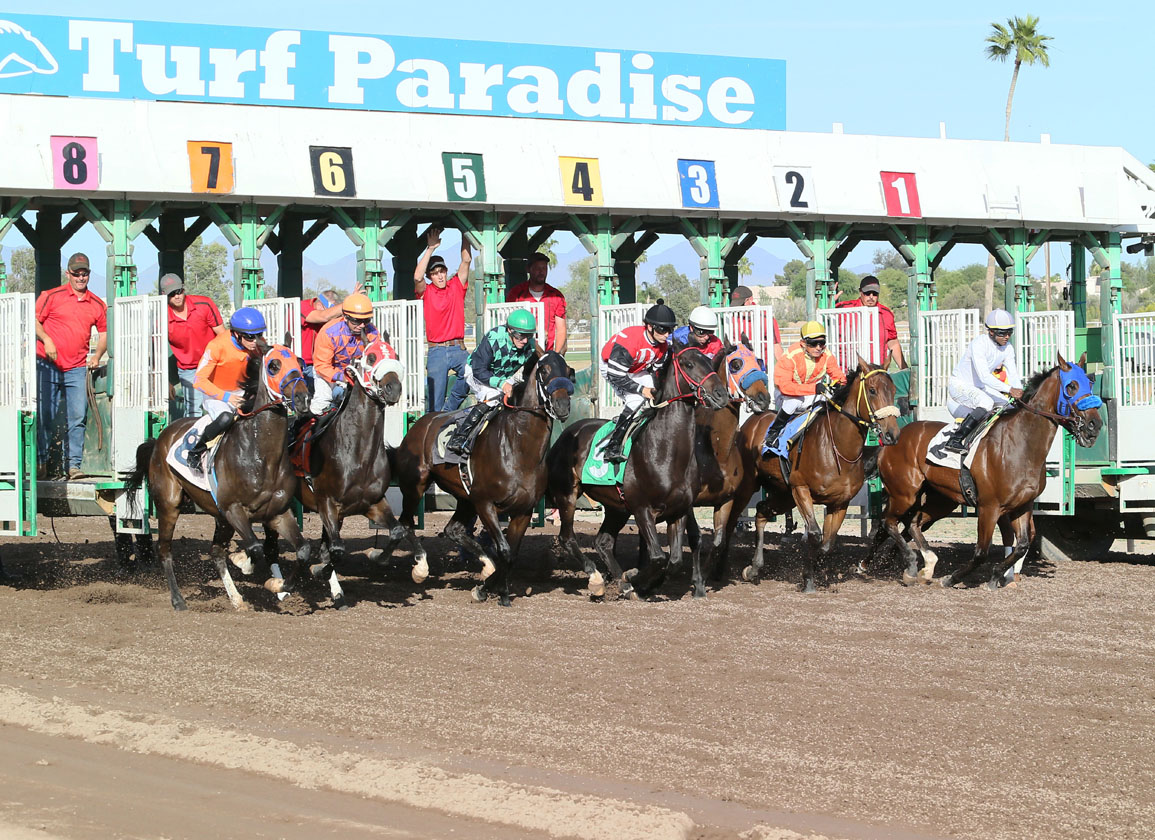 If there's a main takeaway from Tuesday's Arizona Racing Commission Meeting, it's an acknowledgement from officials and track management that the racing industry is monitoring Turf Paradise closely.

“We've got to do a better job at coming up with answers and coming up with solutions,” said commissioner Rory Goree, arguably the most outspoken member of the commission about Turf Paradise's poor equine safety record.

“I'm hopeful that here, in the near future, we as a commission will be able to talk about some of the solutions and ideas and make Arizona the light it needs to be, that we're making the change, doing the right thing instead of being the laughingstock that we are right now,” Goree added. “The eyes are on us.”

Repeated mention was given to racehorse Creative Plan (Creative Cause), who last raced at Turf Paradise Jan. 7, when a tailed off last of nine.

Creative Plan was recently euthanized due to irreversible damage to his suspensory ligaments and fetlock joints that had deteriorated over the course of weeks, according to an article in the Paulick Report Tuesday morning.

Between the time he last ran and his euthanasia, however, Creative Plan was sent to an Arizona horse auction, but went through unsold before being abandoned, the article found.

“With Creative Plan, there was a lot of finger-pointing going on, trying to cover our own butts,” admitted Goree.

In a special commission meeting earlier this month, Gale said that the racing-related catastrophic injury rate was 2.8 fatalities per 1000 starts this season at Turf Paradise.

In her report Tuesday, Gale said that the fatality rate was now around 2.98 per 1000 starts at Turf Paradise.

Gale said that she has included Creative Plan's death in the track's race-day fatality rate because he was injured during a race, “and then was put to sleep, or euthanized, this past week.”

However, another horse that fractured its fetlock earlier on in the meet, and who, despite efforts at rehabilitation was euthanized three months later, was not included within the track's race-day fatality numbers, Gale explained.

“It does seem that now we're about half-way through the meet, some of the horses are showing some wear and tear,” said Gale.

Nevertheless, one ongoing problem has been the lack of veterinarians “or administrative assistance” to help identify and red-flag horses at greater risk of catastrophic injury at Turf Paradise prior to pre-race exams, admitted Gale.

Gale said that, while she has been doing this task on a limited basis, “having someone on the staff that can do this on a more regular basis” would likely make a difference.

Rudy Casillas, the Department of Gaming's deputy director and racing division director, reported that he has asked Gale to start requiring the horsemen to submit updated veterinary medical records of every horse that is entered to race.

“That way, the veterinarians can review those medical reports of each horse that is entered to race and get a better sound picture of that horse's capability and physical status and medical status,” said Casillas. “That will be implemented coming forth, and, hopefully, that makes a difference.”

Another potential nexus of change is the state's claiming rules, said Goree.

“Seems like every morning I read the board and find out that there's a horse that's moved on, just wandering around on the backside, and I think it's because these horses are getting claimed so much they don't know where they live,” said Goree.

According to Goree, he has spoken with Rudy Casillas, the Department of Gaming's deputy director and racing division director, about the claiming rules.

“I know he's going to talk to the AG [attorney general] and see what we might be able to do,” said Goree.

Turf Paradise general manager, Vincent Francia, added more texture to the issue, reporting that there have been 441 claims thus far this season.

“That is a record here at Turf Paradise,” said Francia, pointing as a reason to the track's purses–now supplemented with both state and federal funds–with the average purse working out at about $19,000 per race.

“When you have a purse structure like we have, a lot of claiming is going to go on,” Francia said.

Another ongoing question mark at Turf Paradise has been the condition of the racing surface.

The organic materials are put in to give the track “bounce” and to help maintain moisture levels, said Francia. The sand is to help prevent clumping of the clay-like materials, he added.

A problem seemingly as intractable as track conditions at Turf Paradise has been a shortage of official veterinarians. Indeed, at the commission meeting last October, Gale suggested putting a call out to practicing veterinarians in the area as an opportunity for them to “pick up some work.”

In an attempt to alleviate the burden, the gaming department has asked for funding for an additional veterinarian in the latest executive budget, said Arizona Department of Gaming director, Ted Vogt.

“It's been our number one funding issue for the past two fiscal years, so we're hopeful it'll get across the line this year,” said Vogt.

Earlier on in the meeting, the commissioners voted to approve Rillito Race Track's three-year racing permit application and the race-dates within that window, despite ongoing questions as to the facility's economic viability.

Casillas said that a prior financial review of the track found that it was “insolvent” with less than $1,000 in its bank account at the time.

Because of the importance of Rillito in the Southern Arizona racing calendar, however, “the department has worked tirelessly with Rillito staff to project Rillito's revenue streams, donations, purse monies, state and federal grant funds that are being provided to Rillito,” said Casillas.

That projected amount comes to roughly $900,000 plus. The department's original estimate of Rillito's costs to operate the race-meet was $1.2 million.

“Therefore, the division strongly recommends that Rillito tighten their belts, and be extremely vigilant and responsible and not expend needlessly,” said Casillas, who added that the gaming division would be monitoring their financial predicament closely.

“We want to openly inform Rillito that on an ongoing basis, the division will scrutinize their financial status, and expect that Rillito meet all their obligations, and more so, adopt generally accepted accounting principles to correct the past few years of disarray,” said Casillas.