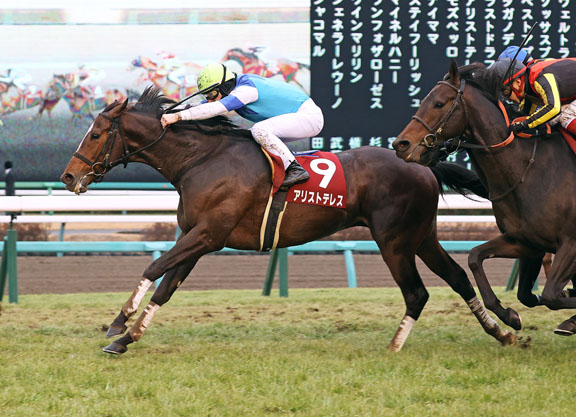 “One of the keys will be getting him to run with a good rhythm, so these past two weeks the jockey has been working the horse uphill in training, as well as on the woodchip course, and getting good contact and understanding with him,” said trainer Hidetaka Otonashi of Aristoteles. “His last piece of work was a lot quicker. I think if the ground is good on the day of the race, the 3,200 meters won't be a problem, and as I've said, getting into the flow of things will be important, but I'd like him to bounce back to form this time.”

In regards to tactics in this weekend's contest, jockey Christophe Lemaire added, “He's become more mature, especially mentally. He's in top condition right now. The start will be important, and also not losing anything in the run. His footwork is good and, hopefully, he can show this inside the last 500 meters.”

Also likely to gain plenty of support, Deep Bond recorded a pair of credible fourths behind winner Contrail in a pair of group starts last season, including the aforementioned Kikura Sho, but couldn't build on those when posting a forgettable 14th in the 2,000-meter Nakayama Kimpai Jan. 5. The 4-year-old's connections hope his eye-catching five-length win in the Daishoten can get the colt back in the winner's circle Sunday.

“He's always been a big striding horse, but in some of his previous races he's looked a bit slow,” said trainer Ryuji Okubo. “Now though, he's looking a lot faster and lighter, and even in the ground last time, he was impressive.”