Are Krone and Peterson an Unbeatable Team? 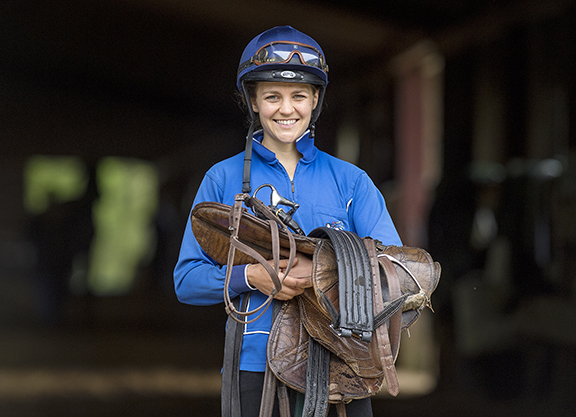 From the TDN LOOK

Passion is a funny thing.

Ferrin Peterson can’t exactly tell you why she will at least temporarily put aside the eight years of study and sacrifice that earned her a veterinary degree from UC Davis, one of the top schools in the country, and a lucrative-and safe-career as a large-animal vet. Nor can she say why she’s willing to let her acupuncture skills and certification lie dormant, for now.

All she knows is this: “I’m following my passion.”

That alone would be an interesting story: girl sets aside career as a veterinarian to pursue her dream of being a jockey. But Peterson took the interest in her choice to a new level when she hired Julie Krone to be her agent, and announced that they would get their start together at Krone’s old stomping grounds, Monmouth Park, when the meet opens July 3.

Peterson is 5’4″, 108 pounds, with a polite manner. At 28, she brings a maturity and confidence to her career not found in most seven-pound apprentices. In all likelihood, she is the best-educated jockey in history, and her accomplishments go beyond that. She is also a certified acupuncturist and was a Division I pole vaulter at Cal Poly San Luis Obispo who reached the state finals in high school and at junior college.

Krone met Peterson at Del Mar last summer, and she made the snap decision to become involved in her story, and to represent her in her own first try at being a jockey’s agent.

“She had a reputation for being the girl who loves racehorses so much that she’s going to ride races while she goes to vet school,” said Krone. “She wants to be a jockey with passion of nothing I’ve ever seen in my life. Literally. Like, unmeasurable craziness. I’ve seen people try to talk her out of it, and they’re like, `Oh, you’re a nice girl. You’ve got a great education.’ And the way she sees it, she’s going to be a jockey until she’s old, and then she can be a veterinarian.”

“This is literally what I wanted to do my entire life,” said Peterson, who graduated a year ago, and felt the call of riding races pulling her back to the track full-time after getting on horses for trainers in the morning during her final years at school. “When I was a young kid, I was always talking about becoming a jockey. I grew up on the back of a horse.”

Monmouth was Krone’s idea. She said that the strength of the jockey colony and the small fields that have plagued Southern California make it a tough place to get your start. Krone parlayed her own success at Monmouth, where she won the riding title from 1987-1989, into a career on the New York and later Southern California circuits. And it’s not the only page they’ll take out of the Krone playbook.

John Forbes and his then-assistant Pat McBurney played a key part in getting Krone’s career off the ground when Forbes, the perennial leading trainer at Monmouth at the time, used her as his regular rider. McBurney has now taken over the reins at the stable, and when it came time to entrust Peterson’s career to someone, Krone sent her east to work with McBurney. She spent this spring exercising eight or nine horses a day for the trainer at Overbrook Farm, where McBurney stabled his horses until Monmouth Park opened for training. McBurney said that when Krone called, he listened.

“I received a call from Julie Krone and she asked me about an apprentice rider coming out to Monmouth Park this summer,” McBurney recalled. “If Julie was excited about a rider, of course we were going to listen to that. So she came out to Overbrook and has just been galloping and breezing horses. We only have a half-mile track here, so you can’t kick on too fast, but she’s doing very good; gets along with the horses as she learns about them, getting them to relax and everything. It’s hard to say what kind of jockey she is at this point, but has a great way with horses. She’s a very hard worker with a great attitude. Everyone likes her in the barn, and everyone is interested to see her get riding and see how she can do.”

Krone was inducted into racing’s Hall of Fame in 2000, and retired for the second and final time in 2004 after winning 3,704 races in a career that spanned almost 20 years. She has taken a particular interest in Peterson since meeting her at Del Mar last year, moving her into the home she shares with her husband, the writer Jay Hovdey, and their daughter in order to more efficiently impart her knowledge. They have reviewed films and form, done strength training, strengthened other muscles by surfing and playing pickleball, and have formed a strong friendship as well as working relationship.

Before they met, Peterson had been riding at Golden Gate while she completed her clinical year in veterinary school, but she always had her sights set on the Southern California circuit. “I thought, `I’m going to go to where I know of the best jockeys and trainers and try to learn from them. And if I don’t make it, then at least I tried my hardest and had an awesome experience.'”

She had had a handful of winners when, that summer at Del Mar, she set out to meet Krone, who was doing a book signing on Pacific Classic Day. Peterson saw the line that had formed, and realized that it wouldn’t be a good opportunity to talk, but happened to run into on her way out of the track that night. She introduced herself, and Krone invited her to her house to talk the next day. The following week, Krone suggested that she stay in San Diego and train with her, and return to racing in the spring.

For the past 15 years, Krone’s nearly full-time occupation has been as a mother. While she has done some racing commentating work here and there, her main focus has been her daughter Lorelei, a gifted singer and actress who is a community theater regular in the San Diego area who hopes to pursue that interest in college. Lorelei tearfully confessed her lack of interest in horses when she was young, and Krone has supported her passion for theater, helping out by painting sets, sewing costumes and even acting a bit here and there.

But in Peterson, she might have found not only her return to the sport, but a new career after her daughter heads off to school. While Peterson is 28, Krone has definitely taken her under her wing as if she’s her second child.

To read the rest of this story at the TDN Look, or to watch the video or hear it as a podcast, click here.