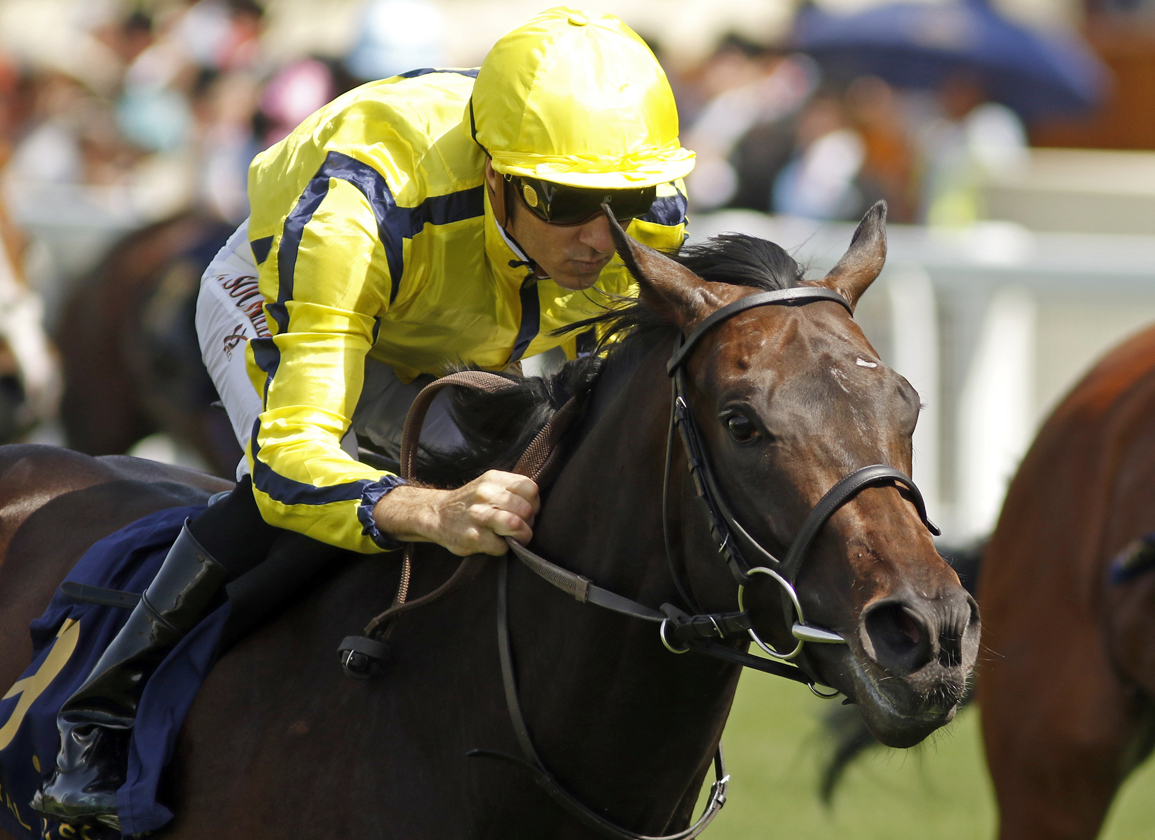 Confirming his position as the chief three-year-old sprinting colt, Sheikh Rashid Dalmook Al Maktoum's Perfect Power (Ire) (Ardad {Ire}) produced his customary generous effort to emerge on top in a highly-competitive and tight G1 Commonwealth Cup on Friday. First establishing himself in the top tier when storming up the stand's side to win the G2 Norfolk S. here 12 months ago, the relentlessly-professional star of the Richard Fahey set-up had since garnered the G1 Prix Morny, G1 Middle Park S. and G3 Greenham S. before being stretched beyond his capabilities when seventh in the 2000 Guineas. Settled halfway down the field initially by Christophe Soumillon racing far side, the 7-2 joint-favourite unleashed his familiar irresistible surge to take over from TDN Rising Star Flotus (Ire) (Starspangledbanner {Aus}) passing the furlong pole. At the line, he had 1 1/4 lengths to spare over Flaming Rib (Ire) (Ribchester {Ire}), who had subdued Flotus late on to get the runner's-up spot by half a length.

For Soumillon, this was just a third Royal Ascot winner, and there was no mistaking his regard for his favourite British runner. “I think the track was a bit fast for him and now we know he is a top sprinter. He is a great horse,” he said. “He has such a big heart andin the last 150 yards he showed a second turn of foot. You have to be very humble when you come over here, as it is the toughest place to win races. When you have the chance to ride a great horse for great owners and a great trainer, you have to put it all together.”

Perfect Power's only reversal since his debut over less than a mile came when a cruelly unlucky fifth in G2 Richmond S. at a Goodwood that can be remorseless when handing out misfortune. Soumillon took over from Paul Hanagan when he went to Deauville to put wrongs right and after their instant connection in the Morny the bromance was formed. Two lengths covered the first seven home in the Middle Park at Newmarket in September, but Perfect Power found a way to win again before coming back to beat the subsequent St James's Palace runner-up Lusail (Ire) (Mehmas {Ire}) in Newbury's seven-furlong Greenham Apr. 16. If the Guineas was a bridge too far in terms of staying power, this race represented the ideal scenario and with a favourable draw in one it was all set up for the likeable winner.

“He was further back than I wanted, but Christophe Soumillon is the man,” Fahey said. “When you have a great belief in a horse and he doesn't let you down, it's fantastic. When you're a small trainer from the North of England, you need group one horses. He has won three now and it will be four soon. He is a special horse. We lost nothing by having a go at the Guineas. In hindsight we are all geniuses and he is definitely happier sprinting. He is a dude of a horse. He just lays down, eats, trains, and looks at all of us and just carries on with his life. You go to work him, switch him on and off and it is incredible. We switched him on for the last two gallops and it was just sensational. I felt that whatever beat him today would be a special horse.”

“We have loads of options,” his trainer continued. “As well as the July Cup, we can go seven furlongs or we can go to the Prix Maurice de Gheest. I will speak to the Sheikh. He is very involved, and I'd like to thank him because I was a little bit worried about the ground as he was a little bit jarred after Newmarket. He just agreed with everything that we discussed and gave me the confidence to have a go today.”

Hugo Palmer said of Flaming Rib, “I was nervous about the ground, although James [Doyle] said he would improve again on better ground. He did a piece of work last week and, while he has always been a horse who has worked well, this was pretty wow stuff. He beat a horse rated considerably higher than him and there is just a chance he has improved again.” Ed Crisford said of Flotus, who was an insulting price given her outstanding Cheveley Park form, “Obviously, she bounced back to her Cheveley Park form. She has been a bit unlucky this year, so to see her run like that was fantastic. I don't think she even has a listed penalty now, because she won before August, so we've got all the options and we'll see where she is.”