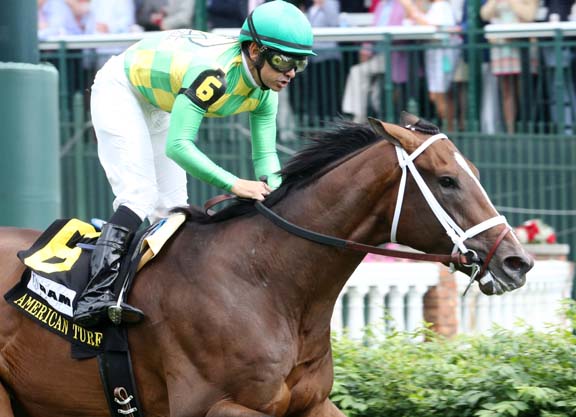 Donegal Racing’s Arklow went from maiden winner to graded stakes winner and made it two-for-two on the lawn with a late-charging victory in the GII American Turf S. at Churchill Downs Saturday. Perched three wide, the 15-1 outsider sat well back off the pace as GI Breeders’ Cup Juvenile Turf winner Oscar Performance (Kitten’s Joy) carved out early fractions of :23.85 and :48.46. Six wide in a sea of horses turning for home, the $160,000 KEESEP purchase split rivals late, took control with a sixteenth to run and held sway over GII Summer S. hero Good Samaritan in the closing strides.

“We wanted to try and make him a Derby horse, but it didn’t pan out that way with the points,” explained winning trainer Brad Cox. “I saw a mile-and-an-eighth maiden race at Keeneland on the grass opening weekend. He ran a big race that day and obviously this was a step up today. He had a great work here [4f in :49 3/5] last weekend on the turf. It’s only the second time he ran on the turf, so I was really proud of him how well he ran today. I thought there would be some speed. He sat mid-pack and got a little wide in the first turn, which could’ve been a good thing with how the turf has been playing. Mike [Smith] put him in perfect position and he kept running.”

Good Samaritan, making his first start since finishing third in the Nov. 4 GI Breeders’ Cup Juvenile Turf, broke awkwardly and raced at the back of the pack. Some eight wide at the top of the stretch, he closed powerfully to just nip Big Score for second.

“The track was a little tiring and soft, then we were wide,” commented jockey Joel Rosario. “It took him a little time to get going after he stumbled a little bit early, but he ran a really good race.”

Arklow was still a maiden when he ran a close-up fourth in the Jan. 21 GIII LeComte S., but he was a well-beaten eighth in the Feb. 25 GII Risen Star S. Moved to the turf and returned to maiden company after that effort, the bay colt graduated with a 3 1/2-length victory going nine furlongs at Keeneland Apr. 9.

Unbridled Empire, purchased for $55,000 at the 2010 Keeneland January Sale, is a half-sister to 2000 GI Del Mar Debutante S. winner Cindy’s Hero (Sea Hero), the dam of MGSW Delegation (Speightstown), as well as to Grade I winner Fourty Niners Son (Distorted Humor). Her Blame colt sold for $100,000 at last year’s Keeneland September Yearling Sale. She produced a filly by Flatter in 2016 and was bred back to Will Take Charge. Arklow’s fourth dam, Rokeby Venus (Quadrangle), is the dam of GSW Rokeby Rose (Tom Rolfe), who produced champion Silverbulletday (Silver Deputy). Also in the family is GI Malibu S. winner Shakin It Up (Midnight Lute) and GI Acorn S. winner Forest Secrets (Forest Wildcat).