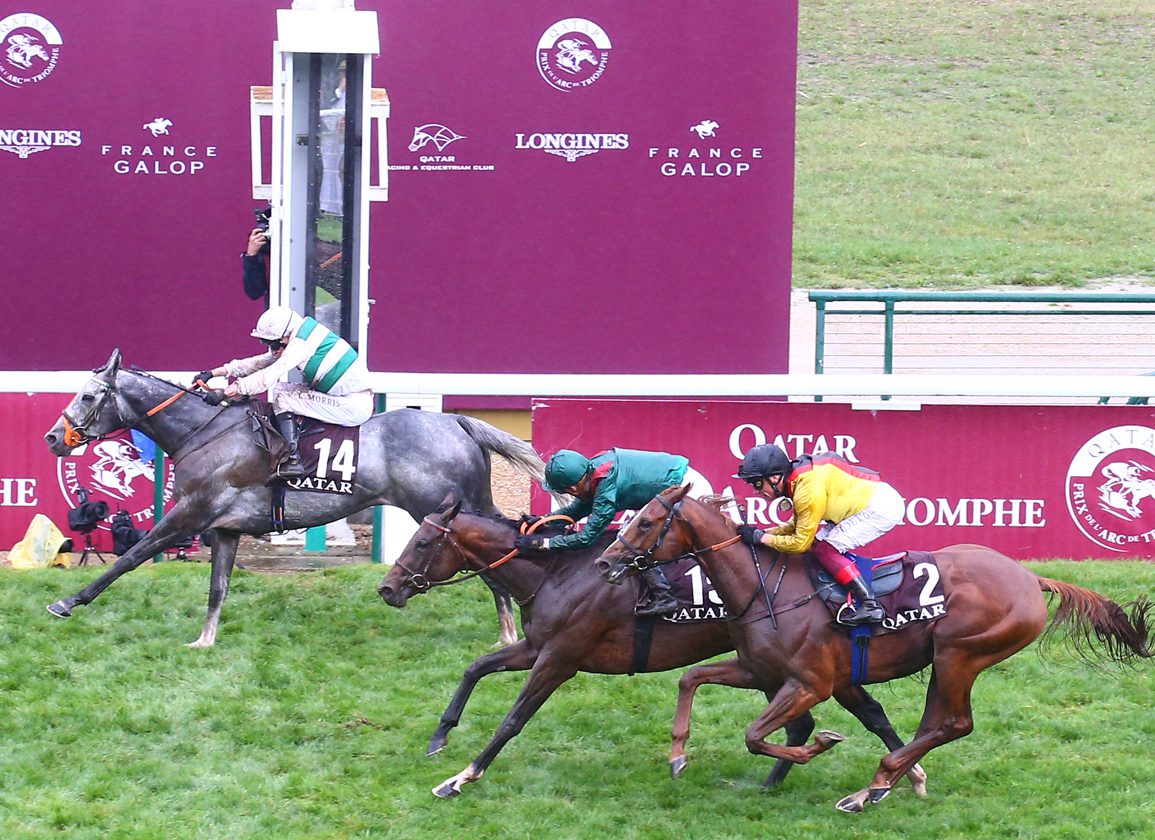 Carried out in driving rain and accompanying gloom, Sunday's G1 Qatar Prix de l'Arc de Triomphe went to Kirsten Rausing's Alpinista (GB) (Frankel {GB}) who with her ever-whitening coat and mud-dappled white silks navigated what resembled a ploughed field like a trail of luminescence at ParisLongchamp.

Taking the eye throughout as she made easy work of the swiftly-deteriorating conditions under Luke Morris, who had been in action on the all-weather at Wolverhampton the night before, the 10-3 favourite waited with all the learned patience of such a beautifully-nurtured 5-year-old for the quartet in front to feel the pinch. As that inevitably happened, there followed a few glorious moments as she came to embody her owner-breeder's life's labour in this sphere and Sir Mark Prescott's unique art of equine education and care.

Although the homebred had arrived on the lead with Morris sitting motionless, her last 1 1/2 furlongs in front were not without tension as Vadeni (Fr) (Churchill {Ire}) chased her hard to the line along with last year's hero Torquator Tasso (Ger) (Adlerflug {Ger}). Despite the sterling efforts of The Aga Khan's Jockey Club and Eclipse hero and Auenquelle's German flagship, this was a result already carved into the precious stone that adorns Prescott's storied Heath House stables. At the line, the mare had bridged a surprising 85-year gap to the last of her age and sex to achieve glory in the famed Corrida, denying Vadeni by half a length and Torquator Tasso by a further neck.

“It's absolutely marvellous and an enormous relief,” Prescott said. “Luke has ridden for us for 11 years and Miss Rausing has had horses with me for 36, so I'm just very lucky. I trained her grandmother and it's hard to think of a better day. You felt she was always going to win, but it was a relief when she got there. It's a wonderful change to have one that can really go and she has been perfect. The race went like a dream. If it hadn't been my horse, I would have thought it was going to win every inch of the way, but when it's your own of course it's a nightmare. I didn't think all that rain would help, but she's never travelled better and has come on with each race.”

Morris added, “Things went lovely and smooth–I had all the confidence in her and she's not put a foot wrong. She is so versatile and so tough and I couldn't believe how well she was going–I had to take her back two out. She dug very deep for me and was very tough when I needed her. This is the pinnacle of my career–there are not many times when I'm teary-eyed, but I was having to hold back the tears today. Sir Mark's had an unbelievable effect on my career and is an unbelievable trainer and person, so I'm honoured to ride for him. Miss Rausing is a very generous lady with what she's done for the sport and I'm very fortunate.”

Alpinista, who started her career with a shot across the bows at Epsom in July 2019, skipped over ground officially described as firm when winning her first black-type race, Salisbury's Listed Upavon Fillies' S., the following August before chasing home Love (Ire) (Galileo {Ire}) a week later in the G1 Yorkshire Oaks. Remarkably, her next start was her last defeat as Antonia De Vega (Ire) (Lope De Vega {Ire}) mastered her in Newmarket's G3 Princess Royal S. a month later and even the biggest dreamer could not have predicted what was to follow.

Foot-perfect through the 2021 G2 Lancashire Oaks and the path of the Grosser Preis von Berlin-Preis von Europa-Grosser Preis Von Bayern Group 1 treble laid down by her second dam Albanova (GB) (Alzao), all reasoned knowledge accepted that the grey had probably used up all her career's fortune at that stage. Alpinista knew better, however, and her pursuit of a personal coronation among her incredible dynasty of Alruccaba (Ire) (Crystal Palace {Fr}) grew ever more impatient as she dashed several Arc hopes on her return in the G1 Grand Prix de Saint-Cloud. Her next stop back in the Yorkshire Oaks could have been her apex, but now we know that was just a launchpad to this key moment.

While the Arc is no stranger to testing ground and autumnal framing, this edition was really something else with the turf and soil flying from an early stage and many visibly struggling before halfway. As expected, the Japanese wonder Titleholder (Jpn) (Duramente {Jpn}) was sent forward with Broome (Ire) (Australia {GB}) predictably on his case and after the first minute of action the order was settled. Rouget's Al Hakeem (GB) (Siyouni {Fr}) was well placed in third, with Alpinista tracking him and by the time they reached the false straight the conditions had truly separated the haves and the have-nots.

Surprisingly, Vadeni who carried perhaps the greatest stamina doubts into the race and who would arguably not been placed in the line-up had connections been able to foresee the amount of rain in the final minutes of the build-up was the one who came out of the pack with the most gusto. While his progress though the mud was hardly smooth, it was as dynamic as it gets in this kind of terrain and for a brief spell Alpinista looked vulnerable. Soumillon gave his all and Frankie managed to get Torquator Tasso close enough, but the grey had the stars aligned for her and her uncanny streak proved unbreakable.

She has now earned a berth in the GI Breeders' Cup Turf at Keeneland in November, should connections wish it. The only remaining question is whether the Alpinista story is at an end and both Prescott and Rausing were non-committal afterwards. “Can she go on again? I don't know what Ms. Rausing will do,” the trainer said. There's the [G1] Japan Cup and the [GI] Breeders' Cup [Turf] to consider, so we'll see.”

Her owner-breeder added, “She will come back to our stud next year. As for the Breeders' Cup or the Japan Cup, we want to go home and talk about it.”

Vadeni fully justified the about-turn of connections to take part and Georges Rimaud commented, “We were very pleased with his run and we were obviously beaten by a very good opponent. Christophe had a good run through the whole race and thought he was going to win, but the mare found more. He's proved he stays the trip in soft ground, so we will go away and discuss what will happen in the next few days.”

Jean Claude Rouget said of the runner-up and of Al Hakeem, who clung on for fourth, “I am proud of my two horses–they ran great races, handled the ground and stayed well. It was a deep field with many possible winners and both finished in the first four so it is a very good day. They will come back stronger next year. I am very happy for Sir Mark Prescott–I've known him well for a long time and I just love this man.”

Dettori said of Torquator Tasso, “He finished really strong and ran a super race. The draw didn't help, but it's his style of racing to run on the outer. I thought for a moment I might get to them, but they were too strong for me.”

Ralph Beckett said of the sixth-placed Westover (GB) (Frankel {GB}), “He ran a good race, he had the perfect position alongside the winner and ran on well in the straight. He was struggling on the ground–you could see that. Hopefully he will come back stronger next year.”

Aidan O'Brien had some unwelcome news about Luxembourg (Ire) (Camelot {GB}), who is back on the easy list after a gruelling experience. “Obviously he got stuck in the ground, he pulled a muscle off his near-hip and is sore enough now,” he explained. “Hopefully we can take him home, but he'll be sore for a while. It will heal in time and hopefully we can look forward to next season. I'd say that will almost certainly be it this season.”

The third dam is the Listed Oyster S. winner Alouette (GB) (Darshaan {GB}), who also produced Albanova's high-achieving full-sister Alborada (GB) who pulled off her own remarkable feat when capturing back-to-back editions of the G1 Champion S. when it was staged at Newmarket. Among her descendants are the G2 City Of York S. winner Shine So Bright (GB) (Oasis Dream {GB}) and the G1 QIPCO British Champions Fillies & Mares S. and G Yorkshire Oaks runner-up Albaflora (GB) (Muhaarar {GB}). This is also the family of Allegretto (Ire) (Galileo {Ire}), who had her own day in the headlines at this venue when winning the G1 Prix Royal-Oak, and the talented G2 Nassau S. winner Last Second (Ire) also by Alzao, who later produced the G1 Poule d'Essai des Poulains-winning sire Aussie Rules (Danehill). Alwilda's 2020 colt by Oasis Dream (GB) unfortunately died last year, while she also has a filly foal by Iffraaj {GB).