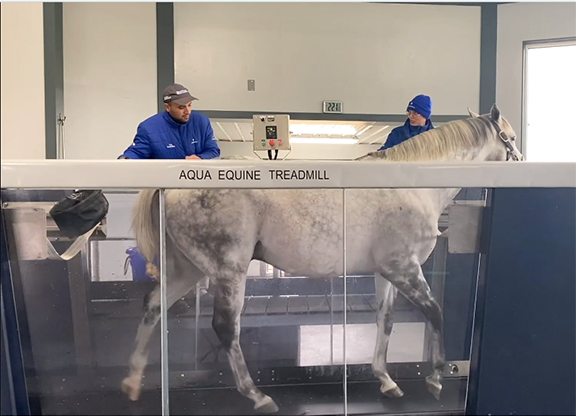 Frosted on the Darley Aqua Treadmill

Preparing elite stallions for a strenuous breeding season can be a challenge when also dealing with freezing temperatures in Central Kentucky. Darley has found a program that circumvents the unpredictable climate and also tailors exercise to each individual stallion with the addition of an aqua treadmill at Jonabell Farm.

Darley stallion manager Graham Lovatt spoke of his idea for the new fitness plan. “I've always wanted to have an exercise program. Many farms will ride their stallions or use a roller and side reins and go for a hand walk for a good hour and a half. While I like those ideas, it can sometimes be dangerous if there's ice and snow, so it's very weather-dependent.”

He continued, “A few years ago we had a horse that we would take to Kesmarc to use their Aquatred. It worked so well, we thought it would be a good idea to use for all of our stallions.”

The low-intensity exercise targets the muscles necessary for a busy breeding season. “We are hoping that this helps develop their back, topline, and hind-end muscles, everything necessary for breeding. I also think it's very good for their joints and stifles.”

The intensity of the exercise correlates with the height of the water and the speed at which the treadmill is moving. With Darley's program, once the stallions enters the machine, the treadmill will begin moving at four miles an hour and water will enter at the base. The water level will rise to about 15 inches so that it is just below the hock.

“The work comes in the motion of the horse getting his feet out of the water and into that forward movement,” said Lovatt. “With the water level at 15 inches, you get that resistance without it being over strenuous. And with the slow walking speed, it doesn't elevate their heart rate too much, but they still get plenty out of it. ”

This water height can be adjusted based on the horse's size and the degree of intensity desired. Lovatt said that this factor is perfect for the variety of stallions on the Darley roster, especially for the 21-year-old farm patriarch, Medaglia d'Oro.

“For Medaglia d'Oro, we set his water level at nine inches. For him and Bernardini (age 17) they don't need as much resistance, but they still can get plenty out of the work. It's done them a world of good.”

The workout also serves as a therapeutic activity, with Epsom salt-based water set at 39°F. “It's a similar idea to how they cool horses out in the saltwater in Australia,” said Lovatt.

Lovatt recounted how the stallions were first introduced to their new exercise regiment. “They were all a bit inquisitive at first, but there was really no hassle with any of them. When we first started, the water was set at six inches and they would only be in for about two minutes. Over time we gradually raised the water and the amount of time they worked.”

He also recalled five-time GI winner Nyquist as the star of the show as they began the program. “He absolutely loved it, and he still does. He's an active horse and likes to keep busy. We have to put him on first every day, because he gets upset if he has to watch the other ones go on first.”

Nine weeks into the program, the Darley team is excited to see the results from their efforts. “In the past few weeks, we've seen a significant change in all of the boys,” Lovatt said. “They've tightened up and have gotten a lot fitter.”

Now at the end of the program, the stallions have worked their way up to exercising for 10 minutes a day. “They are happy as long as you stick to a routine. Ten minutes will be the peak time for each horse, since we have 10 horses to get through every afternoon,” Lovatt said.

With the breeding season beginning, the daily program will slow down, but Lovatt said that they will continue to use it as maintenance type of program as needed.
“Overall, we are happy with the results. We've seen positive changes not just with their physical physique, but also their mindset and attitude. We start the breeding season this week, and they're ready to go.”