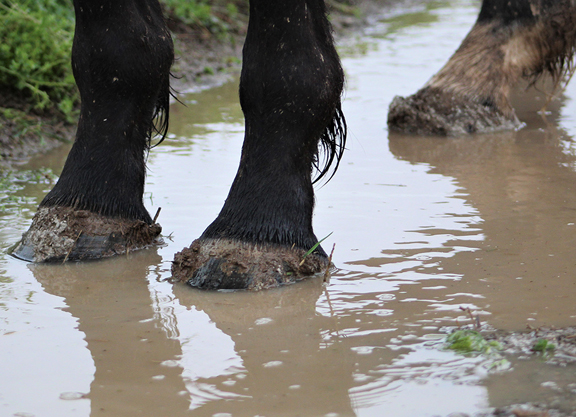 They say April showers bring May flowers, but that's not the only thing they bring. Rain rot, dew poisoning and abscesses are some of the less enjoyable products of spring's rainy days and muddy pastures.

While some horses seem to simply be more prone to wet weather-related ailments than others, there are a number of things horsemen can do to minimize the severity of ailments such as rain rot, or avoid them all together.

Though often mistaken as a fungal disease, rain rot (or rain scald) is a common bacterial infection of the skin (also known as Dermatophilosis). Dermatophilus congolensis, the bacteria that causes the infection, lives dormant in the outer layer of the skin. When the skin is exposed to prolonged moisture (high humidity, rain, sweat), the bacteria infects the compromised skin, resulting in crusty, puss-filled scabs between the living and dead layer of skin.

“Rain rot is really what you see the most when we have a lot of rain, as the moisture impairs the skin's ability to protect against infection,” said Bryan Waldridge, DVM, an internal medicine specialist with Park Equine Hospital who also manages Dr. B's Bluegrass, a Facebook page that features photos, TV interviews, articles and insights from his life as a veterinarian. “Older horses and those with Cushing's disease (pituitary pars intermedia dysfunction) are more prone to skin irritations and infections in general because their immune system is compromised, so if a horse is prone to such ailments, it may be worth testing for Cushing's disease.”

Simple biosecurity procedures are key in containing rain rot. The bacteria that causes rain rot isn't found in the mud, but rather on the skin of carrier animals, so simple steps like not sharing tack or brushes of horses who are infected and disinfecting them regularly can lower the risk of spreading it to other horses.

While blanketing to protect a horse from rain and snow seems like a logical preventative measure, Waldridge cautions against it.

“Blankets can act as greenhouses, trapping moisture against the skin. It's more advisable to get the horse out of the elements where he or she can dry off,” he said. “A three-sided run-in shed allows the horse to escape the elements, or keeping the horse in a stall when the weather is adverse can go a long way in resolving the symptoms or preventing rain rot all together, as can daily grooming to remove dead skin and loose hair.”

Proper nutrition also plays a key role in the prevention and resolution of skin irritations such as rain rot.

“Make sure their feed is fortified with the vitamins and minerals they need to support maintaining healthy skin and coat,” said Waldridge. “When all else fails and a horse does get a significant case of rain rot or even ring worm, sprays or other topical treatments containing Chlorohexidine work well. One in particular that I've seen good results with is Miconahex + Triz, made by Dechra.”

Another ailment commonly affecting horses in the wetter months is dew poisoning (also known as mud fever, scratches, or pastern dermatitis). Caused by the same bacteria as rain rot and/or a contact allergic type reaction that causes necrosis (dying back) of the blood vessels and skin, dew poisoning is often quite painful and affects a horse's pasterns and heels when exposed to prolonged periods of wetness (such as standing in wet grass or mud), causing scabs and brittle skin that can crack when the horse walks or flexes its ankle.

“When horses stand in the same spot in a pasture to eat every day, it can create a muddy mess. One of the simplest things horsemen can do to stave off dew poisoning is to put their hay in a different spot in their pasture every day,” said Waldridge. “It's a lot easier to get under control when you first see it on a horse and tend to it rather than letting it exasperate and possibly become infected.”

To treat dew poisoning, it is best to carefully clip the hair off the affected area so the skin will dry more quickly and medication applied will come in direct contact with the skin. There are many topical over-the-counter remedies, such as diaper rash cream, Shapley's M-T-G or Fura-Zone that sooth the irritated skin while creating a barrier between the skin and wet grass/mud. In more serious cases, medicated shampoos and creams, as well as oral medications, may be appropriate.

“If the horse is significantly uncomfortable, a low dose of Bute or Banamine will help with inflammation and pain. Antiseptic shampoos with iodine and topical creams with steroids and chlorohexidine in them are also effective,” said Waldridge. “Unless the horse has significant swelling or open lesions, the best course of action is to leave bandages off to let air get to the affected area and keep it dry, which may mean keeping the horse in a stall for until the dew dries off of the grass.”

The same wet conditions that lay the foundation for skin irritations can also wreak havoc with a horse's hooves in the form of cracks and abscesses.

Veteran farrier Steve Norman, who has shod such racing superstars as Unbridled's Song, Alysheba and Go for Gin at the height of their racing careers and works on some of the most prominent breeding stock (and their offspring) in the industry, says that this year's winter-turned-spring has been hard on horses' feet.

“I have seen more abscesses in the past few months than I have probably seen in any spring in the last 10 years,” said Norman. “All of this moisture and mud makes their feet soft, then they step on a rock or jagged piece of something and it bruises or penetrates the hoof, letting bacteria work its way in and create an infection.”

Keeping the hoof as dry as possible is key, though for yearlings and broodmares who are turned out for the majority of the day, that proves virtually impossible. While Norman says products like Keratex or turpentine can help to harden the feet, they will only work if applied once, if not twice, a day.

Another issue that goes hand-in-hand with wet weather is cracks in the hooves. When hooves are repeatedly saturated with moisture, then dry out and the quality of the hoof can become compromised, causing an overly dry, brittle hoof when it's dry and a too-soft, fragile hoof when it's wet.

“One of the simplest things you can do to protect a horse's hooves is keep them trimmed on a regular schedule. It's so simple, but so important,” said Norman. “You want to take care of the small cracks so they don't become deep and affect the horse's soundness, and for horses that are barefoot and turned out for most of the day, you want to allow them to build a callous on the bottom of their hoof to prevent abscesses while properly trimming and shaping the hoof to keep cracking at bay.”

This story was posted in Horse Health, Shared News.