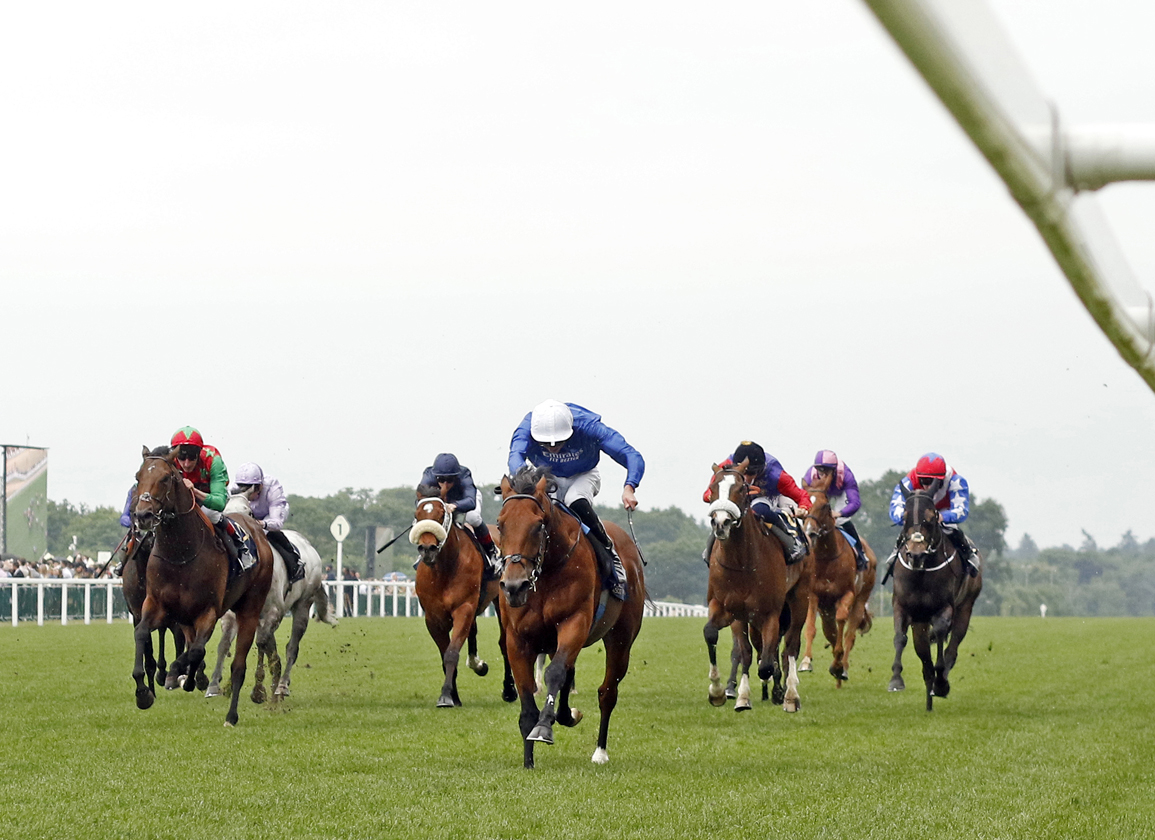 Saturday's G1 Platinum Jubilee S. produced a surprise, but it was a welcome one for Godolphin and Charlie Appleby as Naval Crown (GB) edged out Creative Force (Ire) spread wide across the track to provide a one-two for the stable and the meeting's star sire Dubawi (Ire). Relishing a lead from the ultimately disappointing 5-2 favourite Home Affairs (Aus) (I Am Invincible {Aus}) racing stand's side, Naval Crown who was last seen finishing fourth in the G1 Al Quoz Sprint was sent on by James Doyle approaching two out and came home alone there as Creative Force forged ahead of the main pack up the centre. At the line, it was the 33-1 shot sporting the white cap who had a neck advantage, with half a length back to the dead-heating Artorius (Aus) (Flying Artie {Aus}) and Campanelle (Ire) (Kodiac {GB}).

“I just got a lovely draft into the race behind Home Affairs and he kind of dropped away around the two and a half,” Doyle explained. “We had to be pretty brave and kick for home, but Naval Crown has campaigned over further and he's got the stamina in his legs. He's very genuine. This race is one of the highlights of the week, so to be able to win it again and to do it for His Highness Sheikh Mohammed and Charlie–it's great to play a small part in that.”

Campaigned at up to a mile at two and three, Naval Crown had beaten Master of the Seas (Ire) (Dubawi {Ire}) in the Listed Meydan Classic last February before finishing behind that stablemate when fourth in the 2000 Guineas. Ironically, it was Creative Force and Doyle in the white cap who was in front in the G3 Jersey S. on soft ground here 12 months ago, with Naval Crown under William Buick as they took identical paths racing far away from each other. Naval Crown had one more outing in Europe, when eighth in Deauville's G1 Prix Jean Prat in July and was next seen winning Meydan's G2 Al Fahidi Fort Jan. 21. Favourite for the 1351 Turf Sprint at Riyadh Feb. 26, the bay was sent forward from his wide draw and over-raced before fading to 11th there and was trying this trip for the first time when fourth in the Mar. 26 Al Quoz Sprint back at Meydan.

All the focus had been on the Chris Waller trainee Home Affairs, who was looking to bring up a rare double for the trainer, and all seemed to be going to plan as he tanked along for the first two furlongs under James McDonald a few widths off the stand's rail. At halfway, the rest were too close for comfort and two out the favourite was already beaten as the bulk of the contenders were fighting up the middle of the track. Naval Crown, Campanelle, Highfield Princess (Fr) (Night of Thunder {Ire}) and Creative Force were almost in line spaced apart passing the furlong pole as Artorius came into the picture, but it was the winner's solo effort clear of his group which proved marginally the strongest.

“He owes me a big day, to be fair–he was red-hot favourite for the race in Saudi and we had a bad draw. He jumped impeccably, but just completely tore off,” Doyle added. “It was a bit of a disaster, but it taught us one thing, that he's definitely a sprinter so we dabbled with the idea and he ran a cracking race in the Al Quoz. That kind of taught him plenty that would have stood him in good stead today.”

Appleby commented, “One thing that Naval Crown had coming into the race was that he was still learning the sprinting game. He'd only sprinted once in his life and that was in the Al Quoz. When I took him to Saudi it was all a bit of a mess unfortunately, although we saw his natural pace there. He was fourth in a Guineas, so he's a rock-solid horse. Creative Force ran a blinder. From that draw, it was always away from him but Will gave him a fantastic ride and it was just like the Jersey last year–they were ding-donging away with themselves in the end. They are two fantastic Dubawis.”

“Naval Crown is cutting his teeth at the sprinting division now and he's learning fast. I see no reason why we shouldn't be going to the July Cup now on what we've seen today. We hadn't really planned beyond this–we thought we'd just be following the Australians home to be fair. Full credit to all the team. I am lucky enough to stand here, but the team do all the work at home. The horses have been in rude health since the spring and it's hard to try to maintain it as the year goes on, but touch wood, they're staying there.”

Campanelle lost her unbeaten Royal Ascot record, but nothing in defeat and trainer Wesley Ward said, “I am very proud of her. The race went just as we hoped. She jumped well and those on the speed have been doing well because of the weather conditions here. She would have preferred the going a little softer. She was out in front, she ran a beautiful race and there are no excuses.”

Sam Freedman said of Artorius, “There was barely a gap there and he poked his head through. He has run a wonderful race. The guys say he will probably stay here for the July Cup. The track is little bit different to Ascot, but it is a stiff finish again.” His part-owner Henry Field added, “That is the style of the horse that Artorius is. He didn't quite get there, but the trip away has done him the world of good. Sam Freedman is one of the most astute young trainers I have ever come across. Anthony and Sam have done a wonderful job with him. As long as he comes through the race well, there is no doubt we will run in the July Cup in a few weeks.”

Naval Crown capped one of the key moments in Dubawi's formidable stud career by becoming his 50th group 1 winner. The dam, the Listed Prix Amandine victrix Come Alive (GB) (Dansili {GB}), is a daughter of Portrayal (Saint Ballado) who took the Listed Severals S. and was placed three times in group company including when third in the G2 Prix Robert Papin. Portrayal, whose full-sister Trujillo produced the New Zealand stakes scorer Ruby Armani (NZ) from a mating with Dubawi's son Makfi (GB), is a granddaughter of the G3 Prix de Royaumont winner Truly Special (Ire) (Caerleon) whose progeny list is headed by the GII E. P. Taylor S. heroine and stakes producer Truly a Dream (Ire) (Darshaan {GB}). This is the family of the G1 Irish Oaks heroine Moonstone (GB) (Dalakhani {Ire}). Come Alive's unraced 2-year-old filly by Lope de Vega (Ire) is named Spring Promise (Ire), while she also has a yearling filly by Shamardal.