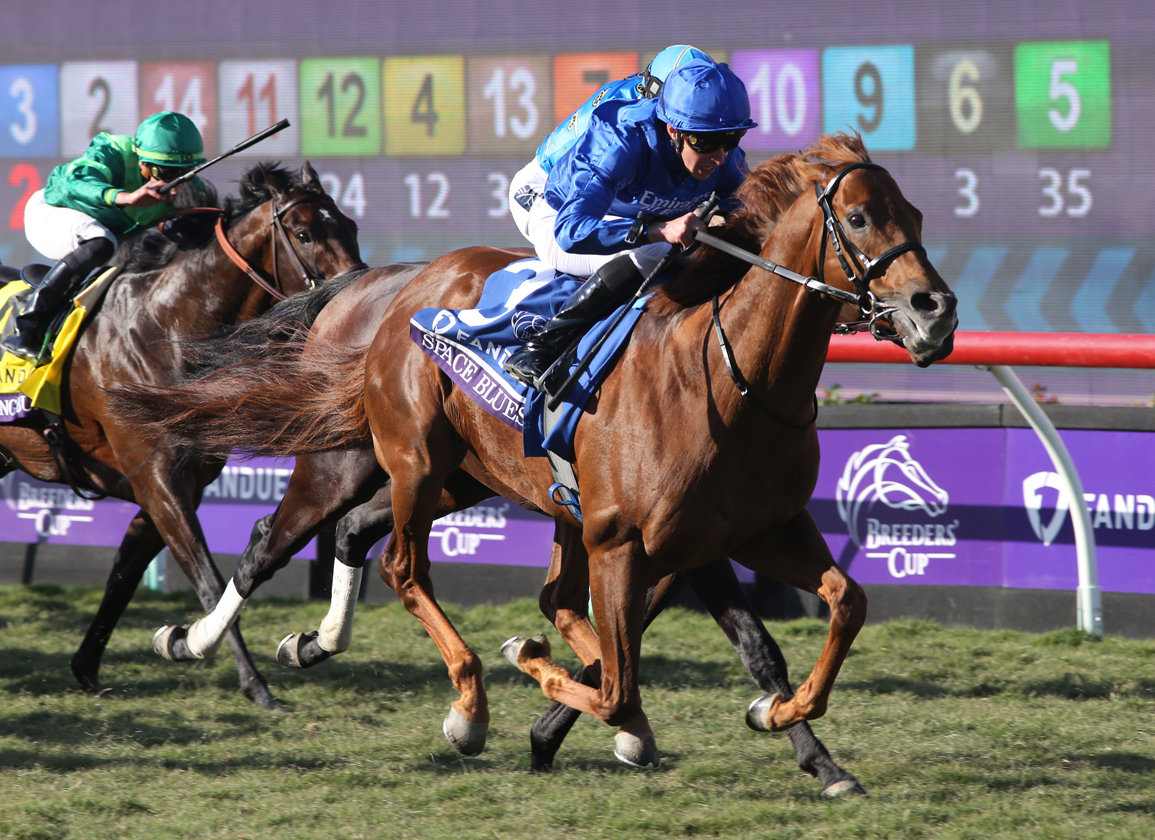 Del Mar, CA–Racing is a sport of great drama, but it is a fair bet that Charlie Appleby wouldn't have minded a bit less of it this weekend. The trainer enjoyed a banner meeting, recording his fourth, fifth AND sixth wins at the Breeders' Cup with the Dubawi (Ire) colts Modern Games (Ire), Space Blues (Ire) and Yibir (GB), all under William Buick in the Juvenile Turf, Mile and Turf, respectively. Appleby also saw two of his runners scratched at the gates-well, three, technically, with Modern Games sensationally re-instated before going on to win Friday evening's GI Juvenile Turf. “I can take a couple of them home fresh,” an always optimistic Appleby reasoned after winning his third race of the weekend.

After Albahr (Ire) (Dubawi {Ire}) had flipped in the gate on Friday evening and been withdrawn, it was a case of very unwelcome deja-vu on Saturday afternoon for Appleby and Team Godolphin when Master Of The Seas (Ire) (Dubawi {Ire}) reared violently in the stalls, hooking his legs over the side of the gate. And just as had happened the evening before, when the Godolphin second string was withdrawn, the first stepped up to the plate, with Space Blues (Ire) justifying favouritism-this time as a genuine betting interesting-to end his illustrious career on a high in the GI Breeder's Cup Mile.

As the racecourse chapter of Space Blues's story comes to a close, Yibir's is, hopefully, just beginning. Considered among the leading Classic prospects among the Appleby ranks this spring, Yibir never quite hit the heights hoped despite picking up placings in the G3 Classic Trial and the Listed Cocked Hat S., and was gelded. Stepped up to a mile and a half and beyond thereafter, Yibir at last began to hit his best stride, picking off the G2 Great Voltigeur S. and Jockey Club Derby Invitational. As a gelding, with options open all over the globe not least at Meydan in the backyard of his owner, it is likely the racing public will see plenty more of Yibir in seasons to come.

Godolphin undoubtedly welcomed an uneventful starting gate process for its Turf runners Yibir and Walton Street (GB) (Cape Cross {Ire}) following the theatrics of Master Of The Seas two races earlier, but the race wasn't without its drama, with Buick admitting afterwards that the 3-year-old had been tough to settle before he at last got into a rhythm in a joint last with the defending champ Tarnawa (Ire) (Shamardal). When the field swung into the short Del Mar straight, it was Ballydoyle representative Broome (Ire) (Australia {GB}) who hit the front with an explosive kick as Roger Varian's Teona (Ire) (Sea The Stars {Ire}) rallied down the middle of the track, but Yibir soon came storming past her on the outside and, in a well-timed ride under Buick, led home Broome and Teona for a decisive victory.

Breeders' Cup weekend was another monumental one for Dubawi, whose only previous winner at the world championships was Appleby's Wuheida (GB) when the event was last at Del Mar in 2017. The spread of races won by his progeny this weekend is yet another advertisement for the versatility and toughness of his stock.

The Niarchos Family has been a staunch supporter of the Breeders' Cup since its inception, and on Friday evening was honoured with IFHA's International Award of Merit in Del Mar. While the Niarchos Family didn't have a runner for this year's championships, its legacy at the meeting was keenly felt through Japan's GI Filly & Mare Turf scorer Loves Only You (Jpn) (Deep Impact {Jpn}). The 5-year-old mare, a Classic winner in her home country, is a descendant of Flaxman Holdings' first Breeders' Cup winner and its best-known horse, the champion racemare and producer Miesque.

Flaxman parted with Monevassia, a daughter of Mr. Prospector and Miesque, for $1.75 million as a 4-year-old at the 1998 Keeneland November Breeding Stock Sale. Monevassia is now best known as the dam of the dual Group 1-winning juvenile Rumplestiltskin (Ire) (Danehill), but she has in fact shone even brighter through her producing daughters. Rumplestiltskin herself left behind the high-class Tapestry (Ire) (Galileo {Ire}) and John F Kennedy (Ire) (Galileo {Ire}). Another daughter produced the multiple black-type winner Wild Wind (Ger) (Danehill Dancer {Ire}), but the most prolific of Monevassia's daughters has been Loves Only Me (Storm Cat), who made her way to the Northern Farm broodmare band. The Deep Impact over Galileo cross has proven a highly prolific one, and from it Loves Only Me alone has produced Loves Only You, the G1 Dubai Turf victor Real Steel (Jpn) and the stakes horses Prodigal Son (Jpn) and Langley (Jpn). The victory of Loves Only You at the Breeders' Cup provides further pomp to the pedigree of Flaxman's own G1 Prix du Jockey Club winner Study Of Man (Jpn), whose first foals arrived this spring. Not only is he also a son of Deep Impact; he is very similarly bred to Loves Only You, being out of another granddaughter of Miesque, Second Happiness (Storm Cat).

Not only was Miesque the first Flaxman Breeders' Cup winner; she was also the first dual winner of a Breeders' Cup race when taking back-to-back GI Miles in 1987 and 1988. Loves Only You was herself providing a first Breeders' Cup winner for Japan, which has so enthusiastically pitched its runners at the world's best races in recent years. Just three races later, Marche Lorraine (Jpn) (Orfevre {Jpn}) sprang the upset of the weekend and provided Japan a day to remember when taking the GI Distaff in a thrilling finish from Dunbar Road (Quality Road). Like Loves Only You, the 5-year-old mare Marche Lorraine was bred by Northern Farm and is trained by Yoshito Yahagi, and she was partnered by Oisin Murphy. Murphy, fresh off his riding championship in Britain, has become synonymous with Japanese runners-in addition to spending time riding in the island nation himself, he was the regular partner of the beloved globetrotting Group 1 winner Deirdre (Jpn) (Harbinger {GB}). With three Breeders' Cup races-the Filly & Mare Turf, Mile and Turf-being beamed to Japan for betting for the first time since 2016, it is doubtless that the celebration in the country was supercharged, and it is a sure bet that the Breeders' Cup will see continued participation, and success, from Japanese runners in the future.

And so another Breeders' Cup is in the books, with the meeting once again advertising why it has been dubbed the world championships. The meeting rewarded some of its strongest supporters and saw new champions crowned, and certainly ensured that the world's best will continue to make the pilgrimage to America on the first weekend in November.