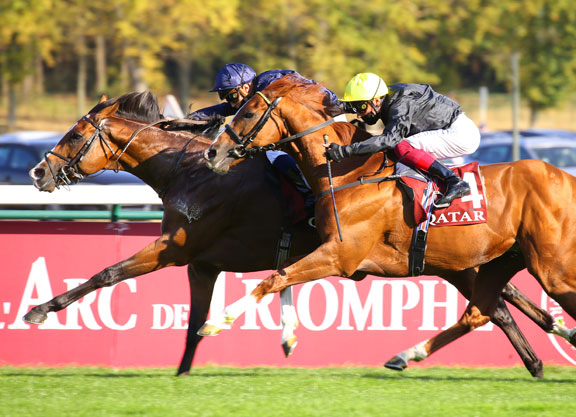 Coolmore’s 2019 G1 Epsom Derby hero Anthony Van Dyck (Ire) (Galileo {Ire}) was winless in seven starts, six of those attempts coming at the highest level, since registering that Blue Riband success and revelled in his old gusto to outbattle Stradivarius (Ire) (Sea the Stars {Ire}) in a pulsating renewal of Sunday’s G1 Qatar Prix Foy at ParisLongchamp. He lined up as the 19-5 second choice, coming back off a second to Ghaiyyath (Ire) (Dubawi {Ire}) in the June 5 G1 Coronation Cup at Newmarket and a fifth in Royal Ascot’s G2 Hardwicke S. last time, and led a steady tempo for the most part. He looked set to be swamped, but was up for a battle when tackled and headed by Stradivarius off the home turn, reclaiming the initiative with 300 metres remaining and staying on strongly under a continued drive to hold that rival’s renewed effort by short neck.

“We knew there was no early speed in the race and hatched a plan to move forward early,” revealed winning rider Mickael Barzalona. “We jumped off easily and I found myself in front, so I let him find a rhythm and go along bit by bit. I had a bit of trouble getting him to stretch out, but once he sensed the danger of Stradivarius he fought back gamely and found more with every stride. We know Stradivarius makes up ground easily, but sometimes gets caught for a bit of acceleration so I wasn’t too worried. I gave him a breather turning for home before winding him up and I think he enjoyed that. He has every right to a place in the line-up for the Arc as he gets into a good rhythm and just keeps galloping in a straight and true line.”

Owner Bjorn Nielsen has not discounted a tilt the Arc for his star stayer Stradivarius and said, “They have basically walked there and Frankie thought he should have gone in front. The race has turned into a sprint and we were only beaten a neck. To be beaten in such circumstances isn’t too much of a worry and certainly not a disgrace. I don’t know if he will run in the Arc, I need to speak with John [Gosden], but given how that race was run I wouldn’t rule it out. The ground conditions on the day will not play a huge part. He goes better on good ground, but can handle soft if needs be.”