Answering the “Belle” for OTTBs in Ontario 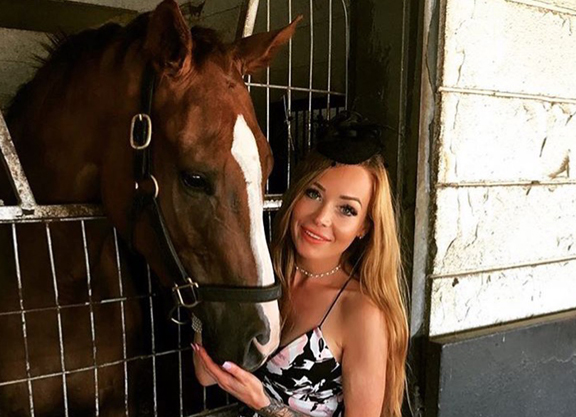 Katie Larsen is living out her dream in the horse business, but in a way she never imagined with a different breed. Larsen, a one-time equestrian rider who works in a bank in credit adjudications, is finding second homes for recently-retired racehorses in Ontario with a business she calls Southern Belle Thoroughbreds.

The operation has boomed since it started in July, providing homes for more than 90 horses with clients across Canada and the United States. Expressions of interest have come from as far away as Panama.

“As a little girl, my dream was always to become a top-level equestrian show jumper, but I never made it in that world,” Larsen said. “The horses I was riding cost a lot of money, so I took a little break. Five years later I was missing horses and I decided I wanted to get back in to riding and the only way I could afford to get back into it was to buy a horse off the track. It was the cheapest way to buy horses.”

In 2015, she went to a rehoming site called Second Start Thoroughbreds, which is based in Fort Erie, and found a horse, Mia Bella Amore (Golden Missile), a five-year-old mare owned by Fort Erie trainer Lamar Squires. Her career was coming to a close with only one win in six career starts and earnings of about $12,000.

Squires said the horse needed a special sort of person because she was scared of everything. She immediately clicked with Larsen. After a couple months of riding “Bella” with the intent of becoming a hunter jumper/cross country horse, Larsen approached Squires about exercising racehorses. She started riding horses in the shedrow, then began galloping and that led to breezing.

Larsen noticed there was a lot of hidden talent in the horses at Fort Erie, and began canvassing both the horses and their connections for the possibility of arranging for a second career when their racing days were complete.

“Everybody wants horses,” Larsen said. “Not a lot of people have a huge budget to buy a horse. If you can get a nice Thoroughbred off the racetrack, give it a little bit of downtime and retrain them, [the market is there]. If a horse isn't fit enough to race anymore, it doesn't mean they can't go on to be a nice show jumper or hunter or three-day eventer. Most of the horses I get, the reasons for selling the horse are it's tired and doesn't want to race anymore.”

Larsen emphasized that the popularity of Thoroughbreds among top-level equestrian competitors has risen in recent years.

“People don't have $75,000 to spend on a warmblood, whereas a Thoroughbred is just as athletic and, in my mind, they're much braver,” Larsen said. “They have huge hearts. My horse has the biggest heart I've ever seen in a horse. When they are racing they are just constantly trying to win and you transition that into a different discipline and you have a horse that is unbelievable. People are recognizing that.”

After selling a handful of horses, Larsen called the operation Southern Belle Thoroughbreds as a tribute to Bella. A Facebook page was created to list available horses.

“I always say if Bella was a person she'd be a Southern Belle,” Larsen said. “It's her attitude. I haven't had one person come back yet [with issues]. At the end of the day, I cannot see the horse on an X-Ray. I can just look at it and I have an eye for it. I can see a horse jog and say it's a nice horse.”

Despite the transparency of Larsen's operation, she said she also must keep an eye on the profile of her buyers–an ever-present concern in the re-homing process. When a buyer inquired about a horse for $1,000, it raised red flags.

“I try to keep horses away from that price bracket and I have to be 100% sure about whom I'm selling to,” she said. “I have contracts in place to make sure they are not going to be sold for chuckwagon racing, or any auction or slaughter venue, and if they ever want to sell the horse I have to be contacted first. From the start, I did that.”

“I'm not going to say no to a horse. Horses are my passion,” she said. “I say I work for the horses, not so much for the trainers. I want to make sure they're all getting good homes. I vet the people. The networking has been unbelievable. I know a ton of people already, but through word of mouth I'm getting messages daily.”

Larsen–who said her job can be frustrating at time when a prospective buyer's interest wanes–noted that it is also her responsibility to work with new owners to adjust to handling racehorses.

“We have to educate [the new owners] on the fact they're racehorses–they've only known one life,” Larsen said. “Imagine having only one job your whole life and now all of a sudden someone takes you and expects you to do a totally different job. Of course it's going to be hard on them. It's a huge change for the horses. It's not a show horse. It's a racehorse and it's getting them through that transition. They're just so capable. It's unbelievable.”

Larsen said she is constantly receiving updates from the new owners on the horses they've purchased.

“That's the best part to me, seeing them go on to other things,” Larsen said.