Another Winner for American Pharoah at Laurel 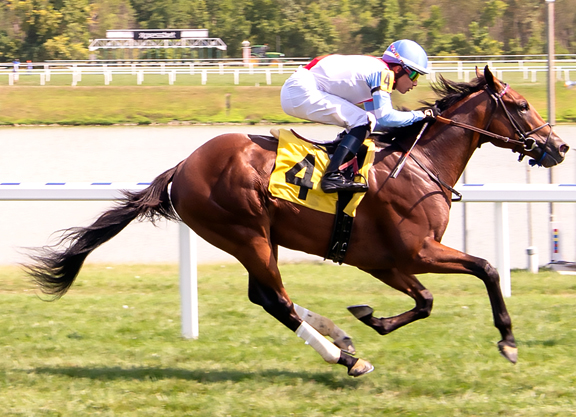 5th-Laurel, $40,000, Msw
KING OF EGYPT (c, 2, American Pharoah–Prof. McGonagall, by Storm Cat), hailing from a productive turf family and looking to become the seventh winner for his Triple Crown-winning freshman sire (by Pioneerof the Nile), dueled and drew off as a 5-1 shot Thursday. Chasing favored fellow firster Chapalu (Flatter) from the two path with another foe perched to his outside, the bay poked a head in front at the head of the lane and edged clear under confident handling late to prevail by 1 1/4 lengths. “It appeared to be a pretty salty group. He's a colt we've always liked a lot. We followed him over the winter. He's out of a good family,” trainer Graham Motion said of the winner. “Dr. [Barry] Eisaman had him in Ocala, and he felt like he was one of the better ones he had down there. And that speaks volumes, because he has a lot of nice horses.” Of the decision to debut at Laurel rather than up at Saratoga, Motion said, “I've got to be honest, I've been a little confused with his workouts in the morning. He's been pretty laid-back, and it's been a little bit hard to gauge him in the morning so that's kind of why I chose to run him at Laurel. I thought it would be throwing him in the deep end if I brought him up to Saratoga, but I was glad to see him run to the way we had hoped he would over the winter.” King of Egypt is a half to It's Tea Time (Dynaformer), GSW & GISP, $470,226; and to Ultra Brat (Uncle Mo), MGSW & GISP, $478,299. A daughter of GISW Rootentootenwooten (Diesis {GB}), dam Prof. McGonagall has a yearling colt by Uncle Mo and a foal colt by Munnings. She most recently visited Candy Ride (Arg). Lifetime Record: 1-1-0-0, $22,800. Click for the Equibase.com chart or VIDEO, sponsored by Fasig-Tipton.
O-Alex G. Campbell, Jr.; B-Alex G. Campbell, Jr. Thoroughbreds, LLC (KY); T-H. Graham Motion.