Another Sonny Day at Belterra Park 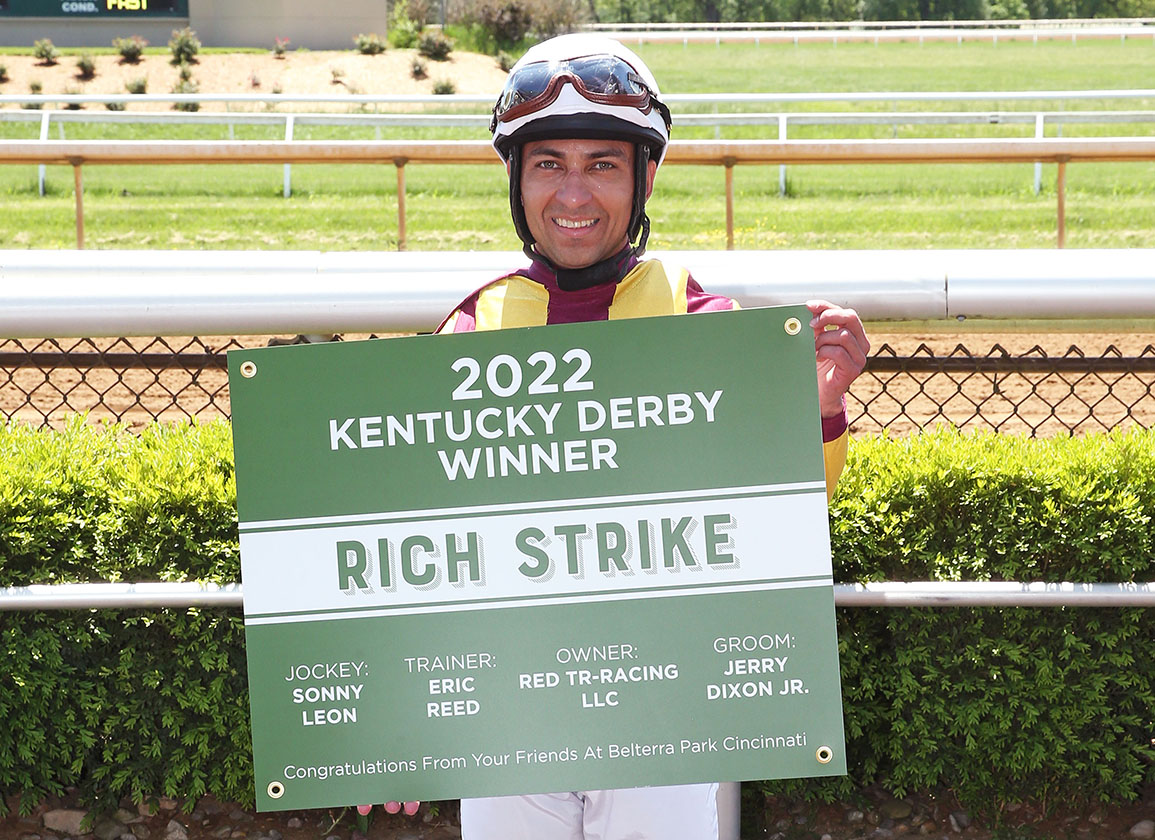 Sonny Leon made his return to Belterra Park on Friday. | Coady

It was back to business as ususal for jockey Sonny Leon on Friday afternoon as he returned to Belterra Park six days after his ride of a lifetime aboard Rich Strike (Keen Ice) in an unforgettable edition of the GI Kentucky Derby.

Coming off his first-ever graded stakes win in the Run for the Roses, Leon ran second in race one, third in race two, and won going away in race three. Fittingly, the 3 3/4-length victory aboard Runway Rosie (Tonalist) in the $18,800 allowance contest was for trainer Eric Reed. Prior to the race in the paddock, he shared an enthusiastic high-five with Rich Strike's groom, Jerry Dixon Jr. After the winner's circle photo, he posed with a '2022 Kentucky Derby Winner' sign and the crowd applauded as they watched a congratulatory video on the main screen with well-wishes from Belterra's racing community.

Leon wrapped up Friday's card with two more second-place finishes and a win in the finale.

“We had a very good moment last week but right now we've got to go back to reality,” Leon said at the end of the day. “We had a couple wins today. We made a Sonny day.”

Throughout the afternoon and even half an hour after the races had finished, fans gathered around the paddock waving racing programs and Kentucky Derby Woodford Reserve bottles. Leon willingly obliged their requests for signatures and photos, taking in all the added fanfare in stride.

“That was fun,” he said. “This is my first time having a moment like this. I took pictures with a lot of people and gave a lot of signatures.”

A native of Venezuela, Leon moved to the U.S. in 2015. He first started out at Gulfstream Park before moving his tack to the Ohio and Kentucky circuits. With several jockey titles at Mahoning Valley already to his credit, he is currently ranked among the top five jockeys at this year's Belterra race meet.

Leon first rode Rich Strike last December at Fair Grounds, finishing fifth to Epicenter (Not This Time) in the Gun Runner S. Leon described Rich Strike as “a little green” in the race in New Orleans, but noted that the colt gained valuable experience and learned a lot since then.

“My dream came true when Eric Reed called me Friday morning and said, 'Man, we got in,'” Leon recalled. “That was my best moment when I heard from him. I got super excited. I spoke with my wife and she was excited. I didn't know he was going to win the Kentucky Derby, but I knew in that moment that I would ride in the Kentucky Derby. I wanted to just enjoy my moment and that's what I did.”

The ultra-impressive ride Leon gave Rich Strike that day has been analyzed all week, but for the jockey himself, he believes the keys to his success were about having patience and knowing his horse.

“I knew they went fast in the beginning,” he explained. “I wanted to go to the inside to save ground, which was perfect. We saved a couple lengths there. I stayed far away because that's the way this horse likes to run. When I got to the three-eighths, I found a lot of traffic but I didn't get desperate. That was a good move, to be patient. When turning for home, I had to wait until they opened up the rail. I didn't know where to go because I still had a few horses in front of me. The rail opened up and wow, that was amazing because my horse got clear and he answered beautifully.”

'Wow' is a term Leon uses a lot when talking about Rich Strike and their accomplishments together.

“We have a very good connection and that is what was so special for me,” he said. “What can I say? We did it.”

On Thursday, Rich Strike's connections announced that they would skip the GI Preakness S. and instead, point toward the GI Belmont S. It was a decision that Leon supports wholeheartedly.

“I think it was a very wise move,” he said. “The horse needed some time to get a good recovery and get some rest. The Belmont is going to be a perfect distance for him. It's a long distance and a deep track. I think he's going to be tough.”

Until then, Leon plans to soak up every opportunity that his outstanding Derby performance provides, be it in a Grade I at Belmont or a claiming race at Belterra.

“My next goal is to go to the Belmont and enjoy that moment. It's a big race. It's going to be a tough race, but I think my horse, Rich Strike, can do it. After that we'll see what happens, but I'm happy to go back home and go to Belterra Park to win a couple more races.”