Another Maker Claim Makes the Grade in UN 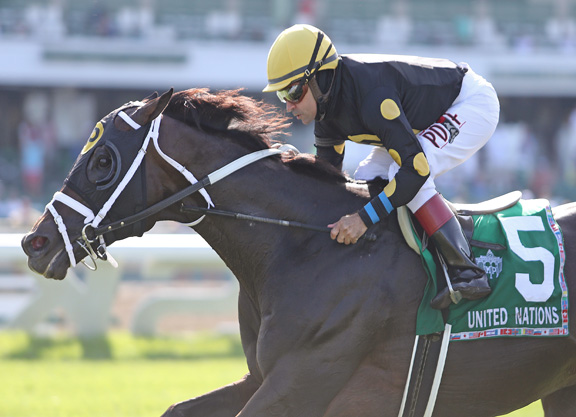 Mike Maker's incredible success with turning claimers into graded winners on the turf is well documented, but that didn't stop Aquaphobia from getting lost on the board and upending Saturday's GI United Nations S. at 10-1 off a 9-2 morning line. Taken for $62,500 out of a fourth-place run at Gulfstream Jan. 26 for Drawing Away Stable and Robert Falcone, Jr., the bay immediately began repaying his new connections' investment when he bested future stablemate and fellow UN competitor Muggsamatic (Any Given Saturday) in a Gulfstream starter stakes race Feb. 17. Fourth in the GII Muniz Memorial Classic S. at Fair Grounds Mar. 21, he was second in a listed event back at Gulfstream May 9 and most recently checked in a close fourth in the GII Wise Dan S. at Churchill June 20.

Aquaphobia settled into a ground-saving third as Paret cruised along through splits of :24.50, :48.90, 1:14.41 and 1:38.48. He looked loaded heading for home but was stuck in the pocket behind Paret and inside the coming-on Corelli. Rider Joe Bravo got busy on Aquaphobia in upper stretch, pushed him through a tight seam midway down the lane and that was that.

“Joe Bravo rode him beautifully,” Maker said. “We had a lot of confidence in the horse coming in and he didn't let us down. He's run a mile and quarter in the past in he was successful but he hasn't had the opportunity to go that long or longer again. We felt this horse was better than we were getting out of him. I think the distance was the reason. He'd been training dynamite, so I was optimistic. Coming out of his last race, the Wise Dan, I thought that was a good race. He was beaten less than two lengths. So it looked like he was getting back to where we think he can be. He's a classy, sound horse who makes it easy.”

Pedigree Notes:
Aquaphobia became the third consecutive generation on his dam's side to add a Grade I victory to his name. Dam Pussycat Doll took down a trio of Grade Is in the mid-2000s and granddam Hookedonthefeelin won the GI La Brea S. in 1999 (which was later one of the races won by Pussycat Doll in 2005). In addition to Pussycat Doll, Hookedonthefeelin also produced 2012 GI Malibu S. winner Jimmy Creed (Distorted Humor). Both mares were also stellar in the sales ring, with Pussycat Doll bringing $2.3 million at the 2007 Fasig-Tipton Kentucky November sale and Hookedonthefeelin bringing $2.9 million at the same sale in 2006. Aquaphobia is by Giant's Causeway, a star on the track and in the breeding shed, and is one of 192 black-type winners–114 graded–by the late sire. He's also one of 11 stakes winners out of mares by Real Quiet, including half-sister and listed English winner Forever Popular (Dynaformer). Pussycat Doll's last reported foal is a juvenile colt by Uncle Mo.