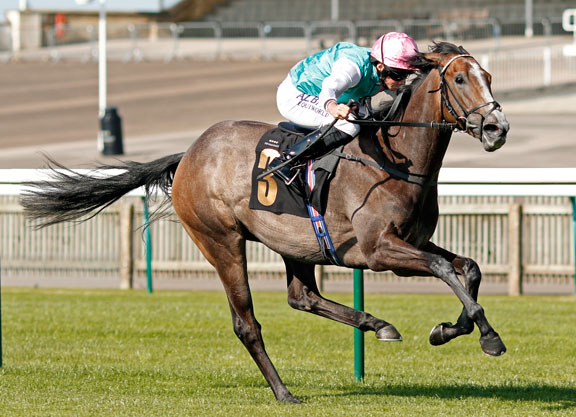 Saturday's Close Brothers Motor Finance EBF Stallions Fillies' Novice S. looked there for the taking for Khalid Abdullah's Monsoon Moon (GB) (Kingman {GB}) and the half-sister to last year's G1 St Leger winner Logician (GB) (Frankel {GB}) was in uncompromising mood as she duly earned TDN Rising Star status over Newmarket's mile. Always travelling strongly under Ryan Moore tracking the early pace, the 2-5 favourite who was third on debut behind TDN Rising Star Love Is You (Ire) (Kingman {GB}) at Ascot a fortnight previously was still full of running when sent to the front two out. In total command from there, the grey was chased to the line by the fellow John Gosden-trained debutante Haija (Fr) (Shalaa {Ire}) but was 3 1/4-lengths too strong there as she in turned pulled seven lengths clear of Naflah (Fr) (Territories {Ire}). The latter had been four lengths adrift of Monsoon Moon at Ascot, putting a clear marker on the race in which Godolphin's newcomer Sayyida (GB) (Dubawi {Ire}), the half-sister to Masar (Ire) (New Approach {Ire}), blew the start and finished last.

Gosden is understandably in no rush with the winner. “Monsoon Moon is a nice filly. She's a big filly and she still needs to mature physically and mentally,” he said. “I don't think we want to be launching into anything next and maybe she'll have one more run this autumn. I don't think she'll go for the Fillies' Mile and Ryan [Moore] didn't feel it was the right thing to do for her right now.”

The second dam Tantina (Distant View) captured the seven-furlong Listed Sceptre S. giving three pounds and a five-length beating to the high-class Chic (GB) (Machiavellian), so it was no great surprise that she proved a high-class producer for this operation. Her G1 Dubai Duty Free-winning son Cityscape (GB) was followed by the G2 Temple S. winner and G1 July Cup runner-up Bated Breath (GB) who have both enjoyed success as sires. She is also the second dam of the G1 King's Stand S. runner-up Equilateral (GB) (Equiano {Fr}), while the third dam Didina (GB) (Nashwan) is the GII Dahlia H. winner. Her descendants include the G2 Gimcrack S. scorer Ajaya (GB) (Invincible Spirit {Ire}) and the G3 Rose of Lancaster S. and G3 Winter Hill S. winner Extra Elusive (GB) (Mastercraftsman {Ire}), while the fourth dam Didicoy (Danzig) is a half-sister to Juddmonte's European champion 2-year-old colt of 1997 Xaar (GB). Scuffle's yearling colt is by Time Test (GB), while her 2020 colt is a full-brother to Logician.