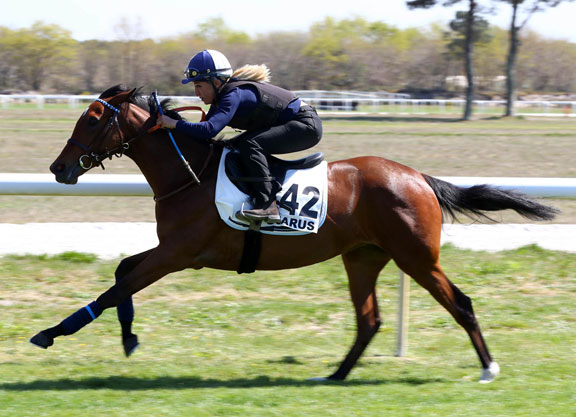 The second crop of France's leading first-season sire of 2018, Anodin (Ire) (Anabaa), were highly sought after at Osarus's La Teste breeze-up sale on Thursday. The Haras du Quesnay resident was responsible not only for the top-priced lot, a filly that fetched €90,000 from trainer Christophe Ferland, but three of the top 10.

The sale-topping filly (lot 42) was consigned by Paul Basquin's Haras du Saubouas and is out of Ciao My Love (Fr) (Touch Down {Ger}), making her a half-sister to the G2 Prix Daniel Wildenstein second Hello My Love (Fr) (Literato {Fr}). It is the extended family of G1 Deutsches Derby winner Lagunas. Basquin picked up the filly for just €17,000 at Arqana's October yearling sale last year.

The same Saubouas/Ferland transaction took place for another juvenile by Anodin when the trainer signed for a colt (lot 80) for €60,000. The colt, who had cost €43,000 at Osarus's September yearling sale, was the third-highest price of the sale and is out of Midas Medusa (Fr) (Elusive City), a full-sister to British listed winner Mister Hughie (Ire).

Progeny of Siyouni, unsurprisingly, were also prominent among the top sellers, and the Gilltown Stud sire supplied the day's second-highest price in lot 85, a colt bought by Mandore International Agency for €75,000. The colt is out of the G2 Flying Childers S. third Mythical Border (Johannesburg), a half-sister to G3 Sweet Solera S. winner Long Lashes (Rock Hard Ten). He was one of two Siyounis offered by Ecurie Prevost Baratte out of stakes-placed mares and the other, lot 2, a filly, was bought by MAB Agency for €50,000. She is out of the G3 Prix du Bois third Sage Melody (Fr) (Sageburg {Ire}). Her third dam, the Group 3-winning Marie De Ken (Fr), produced the GII San Francisco Breeders' Cup Mile winner Charmo (Fr) and G2 Prix d'Harcourt and G3 Prix Vanteaux winner Ana Marie (Fr).

Mandore also scooped up a filly by exciting young sire Camelot (GB) for €57,000. Lot 52 is out of the Anabaa mare Drole De Dame, and her third dam is the G2 Ribblesdale S. winner and G1 Oaks d'Italia second Armarama (GB).

Also on Mandore's shopping list was a colt by another leading French sire, Haras d'Etreham's Wootton Bassett (GB). The youngster (lot 37), consigned by l'Ecurie Yann Creff, is the third foal out of the Anabaa Blue mare Bryanka (Fr), and GI Diana S. winner Somali Lemonade appears under the third dam. He was an €18,000 Arqana December yearling.

The European breeze-up circuit moves to Britain next week for the Tattersalls Craven sale Apr. 16 and 17.