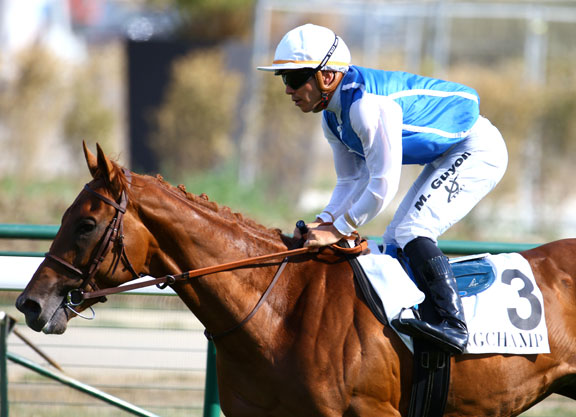 Successful twice over six furlongs in the provinces, Harmless followed a smooth debut at La Teste de Buch May 8 with a game follow-up under a penalty at Toulouse June 8 and entered this Paris bow with an unbeaten record to protect. Perfectly nestled against the fence just off the early pace by Maxime Guyon, the chestnut was delivered to the inside as the rail cutaway and after seizing the advantage with 300 metres remaining did enough to hold his rivals headed by the filly Pivottina. In doing so, he was providing his first-season sire Anodin, Haras du Quesnay's MG1SP full-brother to Goldikova (Ire), with a first black-type winner in the process. “He's a nice precocious horse who has been doing well,” trainer Christophe Ferland said. “Last time at Toulouse, he had to give a lot of weight to the second but still managed to win and I was afraid he had had a hard race there, but he recovered well and was in top form today. I like the way he controlled the race when he got to the front and you will not see much of him now until September, when he will be back for the [Sept. 2 G3 Prix la] Rochette. If he is good enough, he'll then go for the [G1] Grand Criterium.” The owners' racing manager Pierre-Yves Bureaux added, “He is from the first crop of Anodin, so obviously it is a nice start for him. This is especially pleasing, as he is not a homebred and we bought him.”

Harmless is out of an unraced daughter of the listed-winning Snow Gretel, who is a half-sister to the G2 Royal Lodge S. winner and G1 2000 Guineas runner-up Snow Ridge (Ire) (Indian Ridge {Ire}). Her dam is Snow Princess (Ire) (Ela-Mana-Mou {Ire}), who was runner-up in the 1997 G1 Prix Royal-Oak at this venue.