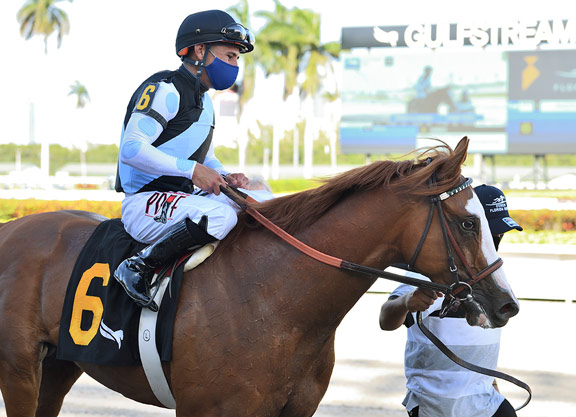 Unbeaten 'TDN Rising Star' Annex (Constitution) looks to keep his perfect record in tact as the favorite in the GII American Turf S. at Churchill Downs. Rallying from well back to take his debut at Gulfstream Jan. 16, the chestnut captured the Palm Beach S. there Feb. 27 and followed suit with a win in the Cutler Bay S. in Hallandale Mar. 27. The red-hot Irad Ortiz, Jr. climbs aboard for the first time here, which adds even more upside to this talented favorite.

It is not often you see Bob Baffert with an entry in a turf race, but he can't be ignored in any event and sends out Du Jour (Temple City) here. Graduating at third asking at Santa Anita Feb. 19, the $280,000 OBSAPR buy wired an Arcadia optional claimer next out Mar. 28, earning an 86 Beyer Speed Figure.

Todd Pletcher is also represented by a runner with a good shot here in Winfromwithin (Into Mischief), who is unbeaten on turf. Making his first three starts on the main track, the bay broke through when getting on the grass and extending to two turns at Gulfstream Jan. 2. He followed suit with a dominant score in Tampa's Columbia S. Mar. 6.