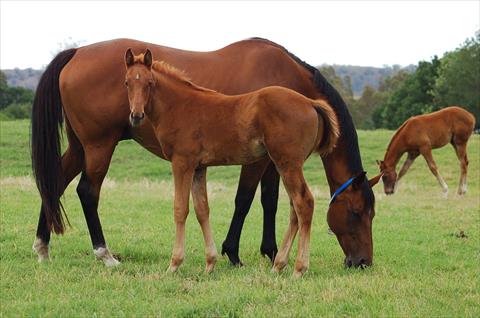 Earth Angel as a foal alongside Miss Finland | lindsaypark.com.au

Drawn gate seven in a field of 11 and equipped with a shadow roll for the debut, the homebred settled in mid-division early on beneath Damien Oliver and improved her position while being coaxed along to do so nearing the 400m marker. In behind runners in the straight, the $2.90-1 favorite finally found daylight inside the final furlong and leveled out beautifully to defeat chief market rival Holy Mind (Aus) (I Am Invincible {Aus}) by a half-length before galloping out strongly. Earth Angel was following in the considerable hoofprints of her champion dam, who landed her career bow at Ballarat in early 2006 and transitioned into Group 1 company two starts later. Trainer David Hayes expects Earth Angel to come along more gradually.

“Miss Finland wasn't any more impressive than that when she won her debut at Ballarat but it is fair to say that Earth Angel isn't as precocious,” Hayes told Racing.com. “It is hard to compare the two of them and probably isn't fair on either horse. You can maybe compare her to a filly like [G1 Schweppes Thousand Guineas winner] Stay With Me (Aus) (Street Cry {Ire}), and my thought is that she won't be as sharp as her up to a mile but beyond that, I think she will develop in to a better filly.”

Stay With Me is one of two black-type performers from three previous foals to race out of Miss Finland, an A$450,000 purchase out of the 2005 Inglis Easter Yearling Sale who was precocious enough to win the 2006 G1 Golden Slipper S. (1200m) and scopey enough to add the G1 Crown Oaks (2500m) a little over six months later. Hayes told Racing.com that his charge would likely make her next start in the Listed Fernhill H. (1600m) at The Championships Apr. 8, with Group 1 targets on the agenda later this season.

“Everything about her indicates she is going to be a filly that will develop in to a serious three-year-old,” Messara told Racing.com. “Her sire…is a Derby winner and anything that his progeny are doing at two is simply a bonus. Earth Angel is still learning but what I liked most about her win was the last 50m, she exploded through the line, we think she is pretty special.”

Miss Finland is the dam of a yearling colt by Arrowfield's first-crop sire Dundeel (NZ) (High Chaparral {Ire}), who was knocked down to Craig Rounsefell's Boomer Bloodstock for A$900,000 to top day one of this year's Magic Millions Gold Coast Yearling Sale (click for Kelsey Riley's sales coverage). She was bred back to Shadai Stallion Station resident Deep Impact (Jpn) (Sunday Silence) last year. The winner's third dam won the G1 Epsom Oaks in 1995, while fourth dam Moon Cactus (GB) (Kris {GB}) was a Group 3 winner in England, second in the G1 Prix de Diane and produced champion Doyen (Ire) (Sadler's Wells) in addition to Moonshell. Click for the Racing Australia chart and Racing.com VIDEO. Click for the free Equineline.com catalogue-style pedigree.