Andersons Aim for the Stars at Fasig-Tipton 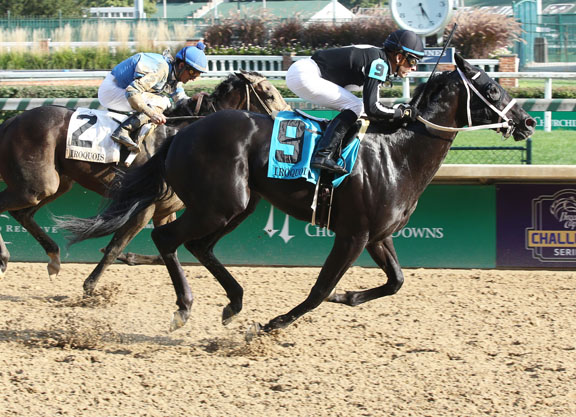 Bryan and Carol Anderson, who maintain a small broodmare band in British Columbia, tasked Alistair Roden with finding them a few broodmares at this year’s Keeneland January Sale and the bloodstock agent duly secured them the 14-year-old Fly to the Stars (Giant’s Causeway), in foal to Street Boss, for what looked to be a sensible $21,000 price tag. The investment started to look even better when the mare’s 2-year-old colt by Dialed In sold for $460,000 at the OBS March sale. Things only got better when the colt, now named The Tabulator, opened his career with three straight victories culminating with a win in the GIII Iroquois S. The Tabulator will go postward in Saturday’s GI Breeders’ Cup Juvenile and two days later, the Andersons will offer Fly to the Stars (hip 174) at the Fasig-Tipton November Sale.

“Bryan and Carol were looking for a couple of mares and she was a nice Giant’s Causeway in foal to Street Boss–who I am a big fan of,” Roden said of the mare’s appeal. “She was just a mare that fit in the price range and I thought she was really good value at what we bought her at.”

Bryan Anderson added, “We liked her page. We liked the horse she was in foal to for our region. We thought we’d give her a go. We thought we got a real bargain.”

It was some two months later that Roden first became aware of The Tabulator.

“I was down at OBS in March and I was looking at this big good-looking Dialed In colt that had just worked in :10 flat,” Roden said. “Brendan Gallagher, who is a friend of mine who I had bought Fly to the Stars from, said to me, ‘You know you bought the mare.’ and I said, ‘What are you talking about? What mare?’ And of course he went on and brought $460,000 and he has gone on from there. He’s the horse that has brought all this about.”

Racing for owner Carolyn Wilson and trainer Larry Rivelli, The Tabulator romped home by nine lengths in his debut at Arlington Park before adding the July 28 Prairie Gold Juvenile S. He tackled graded stakes company in his third outing and came away with a 3/4-length victory in the Sept. 16 Iroquois S.

“We were originally planning for her to be in our broodmare band long-term,” Anderson said of the decision to return the mare to the sales ring. “Obviously, The Tabulater winning that Grade III changed our minds. Fly to the Stars is probably a warmish commodity right now, so we thought it would be a chance to take a profit. We’ve still got the Street Boss filly out of her. So we thought now would be a good time to take some profit.”

In addition to The Tabulator, Fly to the Stars is also the dam of stakes placed Star Via Strada (Street Boss). Her yearling daughter by Take Charge Indy sold for $200,000 at last week’s Fasig-Tipton October sale.

Fly to the Stars will be offered through the Indian Creek consignment at Monday’s Fasig-Tipton November sale. The mare is offered not in foal.

“We shipped her down to Oregon to breed to a stallion down there because he is the best horse within a day’s ship to where we are,” Anderson said. “I really wasn’t part of it because she was in Oregon and I was in British Columbia. I guess as it turned out, it was probably a good thing [she didn’t get in foal] because you really don’t want her in foal to a regional stallion down at Fasig-Tipton.”

Anderson, longtime racing manager for Canadian owner Peter Redekop, and his wife Carol have been breeding Thoroughbreds for three decades. The couple was honored as leading Canadian breeders by Thoroughbred Owners and Breeders Association in 2005, the year their graduate Alabama Rain (Vying Victor) won the GIII Canadian Derby.

“I was a veterinarian at the racetrack here since 1977,” Anderson said. “I practiced for about 30 years. My wife and I set up a small breeding farm even while I was still practicing. It’s a mom-and-pop operation, but we’ve been pretty successful. We are proud of what we’ve done.”

The Tabulator could complete a unique double for Roden.

“If this horse happens to win Saturday, it will be back-to-back Breeders’ Cup Juvenile winners’ dams I’ve bought,” he said. “I sold Classic Empire’s mother to Steve and Brandi Nicholson when she was a maiden. It would be pretty cool.”