An Empire That Will Survive Its Maker's Loss 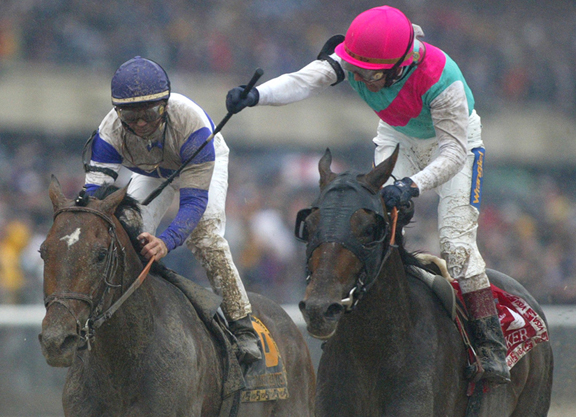 Mahmoud is interred in the same soil. So, too, are Broomstick and his son Whisk Broom II–both born in the first years of the last century; Tom Fool, Vaguely Noble, Blushing Groom; the great matriarch La Troienne. Stop The Music, the horse who owed his Champagne S. success to the disqualification of Secretariat, lasted to 35 before he had to be euthanized in 2005. And let's not forget The Axe, gray son of gray Mahmoud: the sire of Foggy Note, fourth of nine gray dams behind the farm's modern colossus Tapit.

Their memorial stones, in the Gainesway cemetery, render concrete the intangible legacies absorbed through the former estates of C.V. Whitney and Greentree. And perhaps those now grieving Empire Maker, who succumbed to a harrowing illness over the weekend, will find some comfort in the reflection that someday a weathered headstone, bearing his name, will likewise inspire gratitude from future custodians not just of this land, but also of this breed.

Gainesway is fortunate that its present is governed with such a profound sense of duty to both past and future. Antony Beck views himself as much as a kind of steward, or trustee, as an owner. And while there is always something exceptionally unsettling, something discordant, about the abrupt death of a Thoroughbred stallion–perhaps the most vital incarnation of animal potency in all Nature–then at least the best are assured something far closer to immortality than will ever be within our own reach.

For their genetic legacy is so valuable to us, and so absorbingly mysterious, that Empire Maker's contribution to the breed will remain treasured even as it becomes attenuated by the generations to come. Even in his own lifetime, it was famously reviewed and reinterpreted–to the extent that Beck, in partnership with Carlos Heller of Don Alberto, repatriated him from Japan.

Dr. John Chandler, a man integral to the evolution and success of the Juddmonte operation that will reserve a prominent place for Empire Maker even in its extraordinarily crowded pantheon, explained to me once that this horse had paid a price for one of its few mistakes. And that, at least in his self-deprecating estimation, had been to try to extend the cross-disciplinary, turf-and-dirt synergies that had produced the dams of both Empire Maker and his sire Unbridled. (Both were by European Classic winners.)

While I remain adamant that we are generally far too prescriptive in ascribing to bloodlines a predisposition for one surface or another, I do accept that there are exceptions. And it's not hard to accept Chandler's contention that Empire Maker was simply not the right fit for Juddmonte's elite turf mares.

Everything that Empire Maker has since contributed to the Unbridled sire-line–through two sons who also finished second in the Kentucky Derby, and two grandsons who won it–backs up the theory that its trademark is the ability to carry speed, rather than the kind of late acceleration we associate with turf.

There are no rules about this kind of thing. Frankel (GB) (Galileo {Ire}), the ultimate Juddmonte homebred, had a style of running on turf that was tailor-made for dirt. Likewise his brother Noble Mission (GB), who last year produced a (promoted) Kentucky Derby runner-up from his first crop in Code Of Honor.

By the time the Juddmonte team decided that he was not going to help their own program, however, Empire Maker's fee had halved from $100,000 to $50,000 and he was 26th on the general sires' list when it was decided to accept an offer from Japan towards the end of 2010.

True, Empire Maker had recently completed a remarkable double in the GI Spinster S. through Mushka and Acoma; and Mushka had been joined by two others, again fillies, as Grade I winners from his debut crop: Country Star and, switched to dirt after starting in Europe, Icon Project. Moreover Pioneerof the Nile, a graduate of his second crop, had finished second in the Kentucky Derby (ironically after intimating turf potential by a series of synthetic scores).

But it was only once he began his exile that the true prowess of Empire Maker was revealed. Just a couple of weeks before the Japanese deal was announced, a filly named Royal Delta had made a winning debut at Belmont Park. She would go on to win consecutive runnings of the GI Breeders' Cup Ladies' Classic, while four other daughters left behind by Empire Maker would enhance his Grade I record with fillies; these included In Lingerie and Emollient, his third and fourth Spinster winners, respectively, in five years.

But a second Derby runner-up, Bodemeister, reiterated that he could also get a top-class colt–and then came the game-changing emergence of American Pharoah from the second crop of Pioneerof the Nile. (Of course, we could only call him the first Triple Crown winner in a generation because Funny Cide, having won the first two legs, had to settle for third behind Empire Maker–himself runner-up when favorite at Churchill Downs–in the Belmont.)

As American Pharoah was retired to Ashford in 2015, Messrs. Beck and Heller moved to end his grandsire's five-year absence. It helped their cause, no doubt, that Empire Maker's first crop of Japanese sophomores had yet to produce a single stakes winner. (Chandler perhaps not too surprised, granted the turf orientation of so many Japanese mares and races). At 16, however, Empire Maker remained in his prime for the resumption of his Kentucky career–and in 2017 the Classic caliber of his sire-line was dramatically reinforced when one of Bodemeister's first sons, Always Dreaming, won the Kentucky Derby.

Having seen their greatest race won twice in three years by grandsons of Empire Maker, American breeders found themselves still further indebted to those who had brought him home when Pioneerof the Nile, at just 12, abruptly died last spring. Fortunately he bequeathed some rather more affordable alternatives to American Pharoah, like Cairo Prince, Classic Empire and Midnight Storm; though the parallel line was left pretty much to Always Dreaming when Bodemeister was sold to Turkey three months ago. However effective these diverse conduits prove, we should be eternally grateful to those who salvaged, and expertly managed, four extra crops by the patriarch himself for the American gene pool.

Not that these genetic legacies should ever be traced along a path as coarse as a “sire-line”. You could hardly seek a better example than Empire Maker of the kind of top-to-bottom quality that allows a breeder to be relaxed about the unpredictable nature of heritability. For when one horse entwines so many golden strands, it scarcely matters which is unpicked by a particular mating.

That applies most obviously to Empire Maker's dam, the historic achiever Toussaud. But when I look at his sire, I don't just see an agent of the Fappiano line. The first thing anyone should see, really, is that the great matriarch Aspidistra recurs up-and-down: as mother of Unbridled's third dam Magic and also of Fappiano's damsire, Dr Fager.

Magic, though unraced, was by one of the great broodmare sires in Buckpasser, while the mating that produced Unbridled's second dam was with In Reality–himself out of champion juvenile filly My Dear Girl, a daughter of Dr Fager's sire Rough'N Tumble.

Without wishing to labour the point unduly, the eight mares in Unbridled's fourth generation include not just Aspidistra twice over, and an outstanding runner in My Dear Girl, but Cequillo as Fappiano's third dam. While of little account as a runner (like Aspidistra), she produced 18 starters from 19 named foals, 14 of them winners. Besides Fappiano, she is also the third dam of both Ogygian and Quiet American. (In the case of Quiet American, in fact, both his own dam and his sire Fappiano's mother are by Dr Fager out of a granddaughter of Cequillo).

So if you think Unbridled is a conduit only of Fappiano/Mr P./Raise A Native, do please carry on without me.

And what we obviously have in Empire Maker-or “had”… gosh, that's difficult to get used to–is a reciprocal depth in his maternal family. There's no need to reprise the dizzying distinctions of Toussaud as a broodmare, or the fact that her four Grade I winners were all by different sires. But there may be reasons why her mating with Unbridled is going to make the most enduring mark on the Stud Book. Her sire El Gran Senor is out of a Buckpasser mare, and her mother was by In Reality: both, as we've just seen, strong echoes of Unbridled's bottom line.

We should also be sure to mention the role of Bobby Frankel in all this. Toussaud's quirks were notorious, and more than one witness to her trainer's work with her, day-by-day, has assured me that she would have regressed irretrievably in lesser hands. And Frankel, of course, was also charged with fulfilling the potential of her son by Unbridled–potential so radiant that he was named for the destiny he has duly fulfilled at stud.

Frankel died six years after Empire Maker left his barn. In turn, Sir Henry Cecil would become a cruelly premature loss after supervising the triumphant career of the colt named in Frankel's memory by Prince Khalid.

Two portentous registrations, those, for a pair of untested young horses! But the challenge was met, in both Empire Maker and Frankel, by horsemen with nothing in common except a genius with horses–and the patronage of the Saudi prince who had correctly identified two animals equal to the names he gave them.

How can we begin to decipher the strange hand destiny deals to horsemen through their horses? Both, anyhow, will sometimes make us pay for our joy with grief. How strange, for instance, that Chester House died of cancer aged just eight; and that another of Toussaud's foals, Chiselling, was unable to go to stud in South Africa because of a neurological condition. Now Empire Maker has succumbed to a pernicious sickness of his own.

The health of Thoroughbreds can be fragile, sometimes fatally so. Certainly there can be no presumption that the priceless genetic inheritance from Toussaud came at the cost of some accompanying vulnerability. But however evanescent the track career of a Thoroughbred, and however elusive the genetic key to success or failure, a name like Empire Maker will endure as a cornerstone in the wall of pedigree we assemble, year by year, securing them an immortality we cannot have ourselves.