Home » Archive » Shared News » This Side Up: An Awesome Legacy For a Positive Future

This Side Up: An Awesome Legacy For a Positive Future 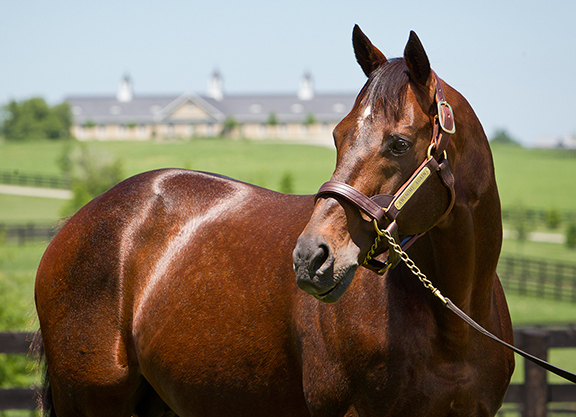 So this dismal year slinks under our resentful glare towards the back gate, like an uninvited guest who has wrecked a party by outrageous behavior. Soon, perhaps, there will be a cheerful ringing of the doorbell and we can welcome one to revive spirits around the world.

In the meantime, somehow, the Thoroughbred is managing to hold together the strands linking all our yesterdays and whatever tomorrow may bring. I've often remarked, during recent months, that horsemen will be well served by the patient perspectives they require even at the best of times. Continuity is not optional, when a horse needs feed or exercise. But we are also indebted to many people beyond the shedrow: for maintaining, more or less unbroken, a calendar of graded stakes and bloodstock auctions that will keep the breed functional. Admittedly a few fixed points of reference were unfixed, some unnecessarily. But just consider what continuity, in the annals, has meant for the final big juvenile race of the year.

It's pretty perplexing, on the face of it, that the Los Alamitos Derby should have lost its Grade I status last year. The two previous winners, Improbable (City Zip) and McKinzie (Street Sense), have in the meantime amply confirmed their elite stature. Mastery (Candy Ride {Arg}) did so as emphatically as possible in his only subsequent start, and the other winners since the closure of Hollywood Park were Mor Spirit (Eskendereya) and Dortmund (Big Brown).

Then there are brilliant but tragic names, faded by time: the second running was won by Roving Boy (Olden Times), who broke down fatally on his return–in poignant symmetry with Landaluce (Seattle Slew), who had brought the female juvenile championship to California as well, before being struck down by colitis. Grand Canyon (Fappiano), meanwhile, melted the stopwatch at 1:33 in 1989 (race then still at a mile) only to be lost to laminitis the following year.

Fate dispenses its favors as randomly among horses as anywhere. But any who persist in discerning some latent coherence beneath events may wonder whether destiny has summoned Positivity (Paynter) into the gate for this year's race, in the week that we lost his venerable grandsire.

Had Awesome Again been born under the same malign star as Roving Boy or Grand Canyon, we would have been denied not only one of the best performances ever to miss a formal championship, in the GI Breeders' Cup Classic of 1998, but also a long stud career decorated by one of the very best racehorses of the modern era in Ghostzapper. As it was, he was able to retire into the cherishing hands of Old Friends, and can be mourned at 26 as one of the most important Thoroughbreds ever bred in Canada.

His own sire Deputy Minister, of course, was an Ontario-bred grandson of Canada's ultimate pride, Northern Dancer. As ever, we also need to credit Awesome Again's dam, especially as Primal Force (Blushing Groom {Fr}) subsequently produced champion juvenile Macho Uno (Holy Bull). (Incidentally, as Primal Force's sire was a grandson of Nasrullah, Awesome Again combined the two main highways from Nearco.) But it is as a son of Deputy Minister that I always had high hopes for Awesome Again.

Where lots of other people obsess about the putative interplay of sire-lines, I tend to view broodmare sires as a more reliable foothold for building a family. The phenomenon is easier to observe than explain, no doubt: as when the sires of those bluest of blue hens, Urban Sea (Miswaki) and Toussaud (El Gran Senor), both happen to be out of mares by Buckpasser. Anyhow, one way or another Deputy Minister has definitely recycled his own prowess as a broodmare sire.

As it happens, Touch Gold–from the same crop as Awesome Again–was out of a Buckpasser mare; so maybe his daughters, in turn, will produce useful broodmare sires in the likes of Commissioner (A.P. Indy) and Upstart (Flatter).

Awesome Again, for his part, is damsire of a young stallion with strong credentials in Accelerate (Lookin At Lucky). And all good breeders should definitely be interested in fillies by Keen Ice: his sire Curlin is out of a Deputy Minister mare, and his dam is by Awesome Again. (Moreover, Keen Ice's fourth dam is Chic Shirine (Mr. Prospector); while earnings of $3.4 million across four seasons very much speak to that toughness we associate with Deputy Minister–not least in the case of Awesome Again, in his pomp at four and responsible for a many horses that thrived with maturity, like Game On Dude.)

And if Awesome Again's outstanding legacy is obviously a son, then Ghostzapper is himself already damsire of a Triple Crown winner. (Albeit Bravazo, another son of Awesome Again himself now starting at stud, tried his best to prevent that happening when getting closer to Justify (Scat Daddy) than did any other horse, closing to half a length in the GI Preakness S.)

It is through Paynter, however, that Awesome Again may have a fitting memorial carved at Los Alamitos. Positivity could prove an important horse for Paynter, whose flagbearer Knicks Go put his name back in lights at the Breeders' Cup. This colt has so far been confined to Cal-bred sprints, but stretching out could elevate his form along with the company he keeps. After landing a maiden on debut in May, at just 4.5 furlongs, he graduated to win a 5.5 furlong stake before rallying after an all-the-way winner, the pair a street clear, in the Golden State S. over seven. It's a blue-collar family, for sure, but Positivity's dam is by Ghostzapper's half-brother City Zip. That looks a pretty evocative formula for the carrying of speed.

Obviously, they changed the race conditions when Hollywood Park closed, and the small print now specifies that only Bob Baffert can win. Certainly the $1-million yearling Spielberg (Union Rags) has been campaigned like one of the stars of his barn and he follows Red Flag (Tamarkuz) here after running flat on a quick turnaround in the GIII Bob Hope S. That was a breakout performance from Red Flag, however, after looking green winning his maiden on turf, and he is in the very best of hands.

It looks a short enough field, on paper, but then taking away those Grade I laurels can be self-fulfilling. All I know is that the gate will be usefully congested by the specters of those who have gone before, whether illustrious past winners (and losers) in this race; or the lamented grandsire of Positivity.

At least Awesome Again was able to complete his second career. Poor Tapizar was also lost this week, to an accident shortly before his departure for a fresh start in Japan. Actually, he was out of a Deputy Minister mare, so may yet achieve some distaff influence even with his premature loss. (Everyone certainly looks forward to seeing what Monomoy Girl may achieve, in that regard, once finally retired.)

In the meantime, however, let's “accentuate the positive, eliminate the negative” and not mess with “Mr In-Between.” There's a new year coming, during which we can legitimately hope that “positive” and “negative” will be restored to their former use, in days before anyone ever heard of COVID-19 testing.

So let's celebrate the many good things bequeathed by Awesome Again; and, however his grandson gets on in his Futurity mission, let's accentuate the Positivity for 2021.