Among Kentucky Trainers, No Consensus On New Lasix Rules 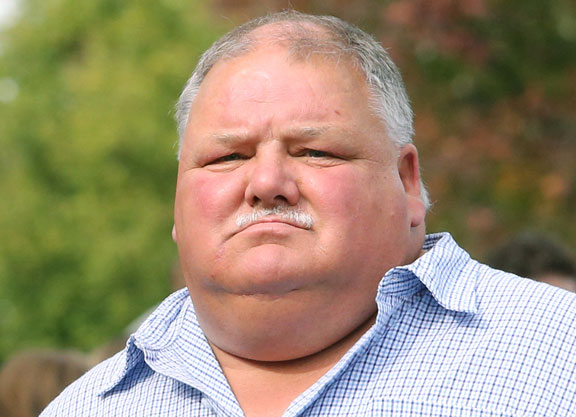 Though he won one of two races for 2-year-olds held last week at Churchill Downs, trainer John Hancock had hoped to do better. A day after the filly Hopeful Princess (Not This Time) broke her maiden, stablemate Cuz (Ironicus) finished seventh in a maiden race for juvenile colts. Hancock said he believes the reason Cuz didn't fare better was because he was, under new rules in place at Churchill, not allowed to run on Lasix.

“[Cuz] is an exceptionably nice colt,” Hancock said. “We scoped him and he showed signs of bleeding. There is a place for Lasix and a need for it.”

Among a number of tracks looking to phase out the use of Lasix, Churchill Downs has instituted house rules banning the medication in all races for 2-year-olds. In 2021, Lasix will not be allowed in stakes races at Churchill. The Kentucky Horsemen's Benevolent and Protective Association countered, filing a lawsuit last week in an attempt to block Churchill's new rule. The horsemen are seeking a restraining order and an injunction to stop Churchill Downs and Keeneland from running 2-year-old races without Lasix.

Hancock, a member of the HBPA's Board of Directors, supports the lawsuit and wants to see Lasix allowed once again in 2-year-old races.

But not every trainer agrees with him. As has been the case since Lasix first surfaced on the racetrack as early as the 1970s, opinions on the drug are all over the map. There are many trainers who, like Hancock, believe Lasix is a vital drug and taking it away will be detrimental to the sport. Others believe the medication is unnecessary and sullies American racing's image and support efforts to wean the sport off the drug.

“I don't agree with what they are doing,” trainer Kenny McPeek said of the HBPA's lawsuit. “Internationally, there are so many jurisdictions that do just fine without Lasix. Personally, I don't understand why it is such a hot issue for the Kentucky HBPA. I wish they'd spend their money on other things like opening up content rather than worrying about Lasix. I know the argument that it has its purposes, but, at same time, there aren't that many horses that truly need it. I think people will learn that horses run just as well, if not better, without it.”

Wesley Ward finished third in the Churchill maiden for fillies and second in the race for colts.

“It wasn't any problem racing them without Lasix,” he said.

“Not at all, Lasix has nothing to do with it,” he said of his slow start to 2-year-old season. “It might be a problem with older horses, but not for 2-year-olds. Our horses have been running well, we've just been a little unlucky. Look at how many of them have finished second.”

McPeek agrees, saying Lasix is not necessary for 2-year-olds.

“If young horses are doing well at that stage in their career then they are not fatigued and they typically eat well,” he said. “The ones who aren't, you don't press on with them anyway. I am pretty content running without it. I think it will be fine.”

Bret Calhoun sent out two starters in Thursday's maiden race for males and came away with a fourth and tenth-place finish. He said neither horse bled, but that doesn't mean that he is a fan of the Lasix ban.

“We all know it's probably safer with Lasix,” he said. “With the two I have run it's been fine, but I know full well it is going to be a problem and probably sooner than later. Personally, I think it is in the best interests of the horse to run with Lasix from the beginning and not take any chances.”

“As a horse trainer, I don't feel like I need Lasix,” he said. “There are horses that bleed that do benefit from it. To me, though, it's not the end of the world if we can't have Lasix. I feel like we would adjust without it, go on and it would be fine. I have never understood why all these prominent names in the industry have come out and are so pro-Lasix.”

Judge Thomas Wingate will hear the KHBPA's motion for temporary injunction on May 27 via teleconference. Wingate can clear up the question of whether or not Churchill can ban the drug, but settling the debate will be beyond his reach.