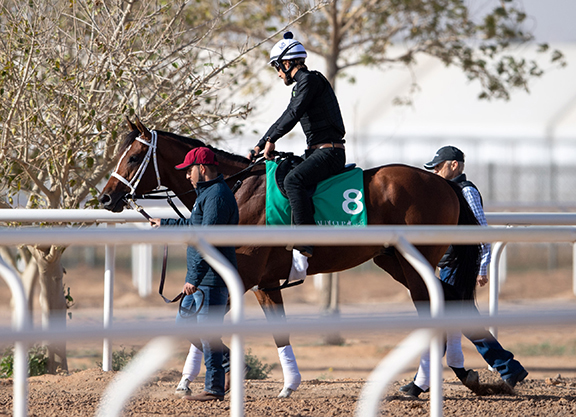 A stellar group of international talent has been assembled for the inaugural $20-million Saudi Cup over 1800 meters at King Abdulaziz Racecourse in Riyadh Saturday, with a quintet of impressive American contenders.

Leading the American charge is Gary and Mary West's Maximum Security (New Year's Day). After infamously being disqualified from first in the GI Kentucky Derby last May, the bay colt redeemed his sophomore season with wins in the GI Haskell Invitational and GIII Bold Ruler H. before cementing an Eclipse championship with a win in the Dec. 7 GI Cigar Mile H. He makes his 4-year-old debut in the Saudi Cup.

Bob Baffert admitted when he first heard about plans for the Saudi Cup, he hoped he would have a horse good enough to compete. The trainer will actually saddle two for the big event, with Mucho Gusto (Macho Mucho Man) coming off a break-out win in the Jan. 25 GI Pegasus World Cup Invitational and stablemate McKinzie (Street Sense) making his first start since finishing second in the Nov. 2 GI Breeders' Cup Classic.

“I'm pretty blessed to have two really nice horses and it's pretty exciting,” Baffert said of the 'TDN Rising Stars'. “McKinzie has always been a really good horse. He's had some tough losses. And Mucho Gusto earned his way with the race he ran in the Pegasus in Florida, even though the race sort of fell apart there in the end. He still ran a big race and I think he's ranked number one in America. He ran huge that day.”

Midnight Bisou (Midnight Lute) will make her first start of the year in the Saudi Cup and co-owner Jeff Bloom is expecting a big race from the champion in her 5-year-old debut.

“The two biggest advantages for our filly is the track configuration–the one-turn mile and an eighth really was intriguing to us–and there's very little kick back and that should be of value to our filly,” said Bloom.

“We've always thought a good deal of him, and the way he set off last year in the [GII] Tampa Bay Derby and the [GII] Wood [Memorial], he looked booked for a good season,” said Juddmonte racing manager Teddy Grimthorpe. “He ran very consistently in the GI Kentucky Derby, the GI Belmont and the GI Travers. Obviously he's had six months off, he's apparently travelled very well there, but it will be a big ask for him.”

Gronkowski (Lonhro {Aus}), second in last year's G1 Dubai World Cup, shipped over from Dubai for the Saudi Cup. The 5-year-old was third in the G2 Al Maktoum Challenge Round 2 at Meydan Feb. 6.

Also in the Saudi Cup line-up is Japan's champion dirt horse Chrysoberyl (Jpn) (Gold Allure {Jpn}), who will be putting his perfect six-for-six record on the line Saturday. He will be making his first start since a record-setting win in the G1 Champions Cup at Chukyo.

“After the Champions Cup, I gave him about two months to refresh and recover,” trainer Hidetaka Otonashi said through an interpreter. “Then I started to train him for the Saudi Cup. It will be his first race outside of Japan and first time shipping with the long flight from Japan to Saudi, so when Chrysoberyl arrived he was tired and had lost about 20 kilos, but since then he has been training very well. And I am happy with him.”