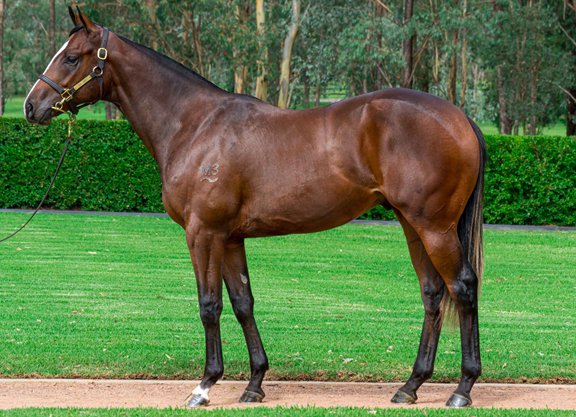 It was a stunning couple of days of trade at the Inglis Easter Yearling Sale, held this past Tuesday and Wednesday at the auction house's Riverside complex at Warwick Farm in Sydney. The event averaged A$371,236, a 5% increase on the last comparable sale in 2019 (last year's sale was held virtually) and was the highest since 2008. The median price of A$280,000 represented a healthy 7.9% bump over 2019 and seven out of eight horses to go under the hammer changed hands. Turnover for the sale was A$132 million, led by an A$2.5-million Snitzel (Aus) colt out of G1 Australian Oaks winner Rising Romance (NZ) (Ekraar) that was bought by Hawkes Racing, one of 22 seven-figure yearlings that were acquired by 17 different buying entities.

“We wanted to try and put together what was fair and effectively a lucrative market for vendors and buyers to operate in, and it's hard to escape the conclusion at the end of the Sale that that has happened. It feels very healthy,” Sebastian Hutch, Inglis's General Manager of Bloodstock Sales and Marketing told TDNAusNZ.

As is frequently the case at Easter, the progeny of bloodstock sourced in the U.S. proved popular and to follow is a brief recap of some of those sellers:

This is the second produce for Stormy Lucy, who won her maiden for $30,000 in 2012 and scaled the heights to upset the 2015 GI Matriarch S. at 65-1. A half-sister to the dam of GSW turf sprinter Big Runnuer (Stormy Atlantic), Stormy Lucy fetched $575,000 from SF Bloodstock at the 2016 Fasig-Tipton Horses of All Ages Sale and was sold with this colt in utero for A$775,000 at the 2019 Magic Millions National Broodmare Sale.

A $300,000 FTSAUG yearling, Beat the Benchmark made a winning debut and was third in the GI Natalma S. in 2016, and was purchased by Anthony Penfold for $400,000 at FTKNOV in 2017. This is the first foal for the half-sister to SW & GSP Abraham (Distorted Humor) from the family of GSW/GISP Miss Isella (Silver Charm).

A maiden winner from five starts, Helena's Secret wa a $200,000 purchase at KEENOV in 2011. The half-sister to SW & GSP Tears I Cry (Chester House) from the family of Street Cry (Ire) and Shamardal, is the dam of GSW & G1SP Thronum (Aus) (Snitzel {Aus}) from five Australian foals to race. Click for more on IRON from TDNAusNZ.

New York-bred and half-million dollar winner Invading Humor was a three-time restricted stakes winner before being scooped up by SF Bloodstock & Newgate Farm–home of the successful Deep Field–for $100,000 at FTKNOV in 2016. This is the second foal for the full-sister to MSP New York-bred Distorted Beauty.

Lot 405, c, Capitalist (Aus)–Ma Can Do It, by Majesticperfection
Purchased by George Moore Bloodstock for A$725,000