American Pharoah's Above the Curve Best In The Saint-Alary 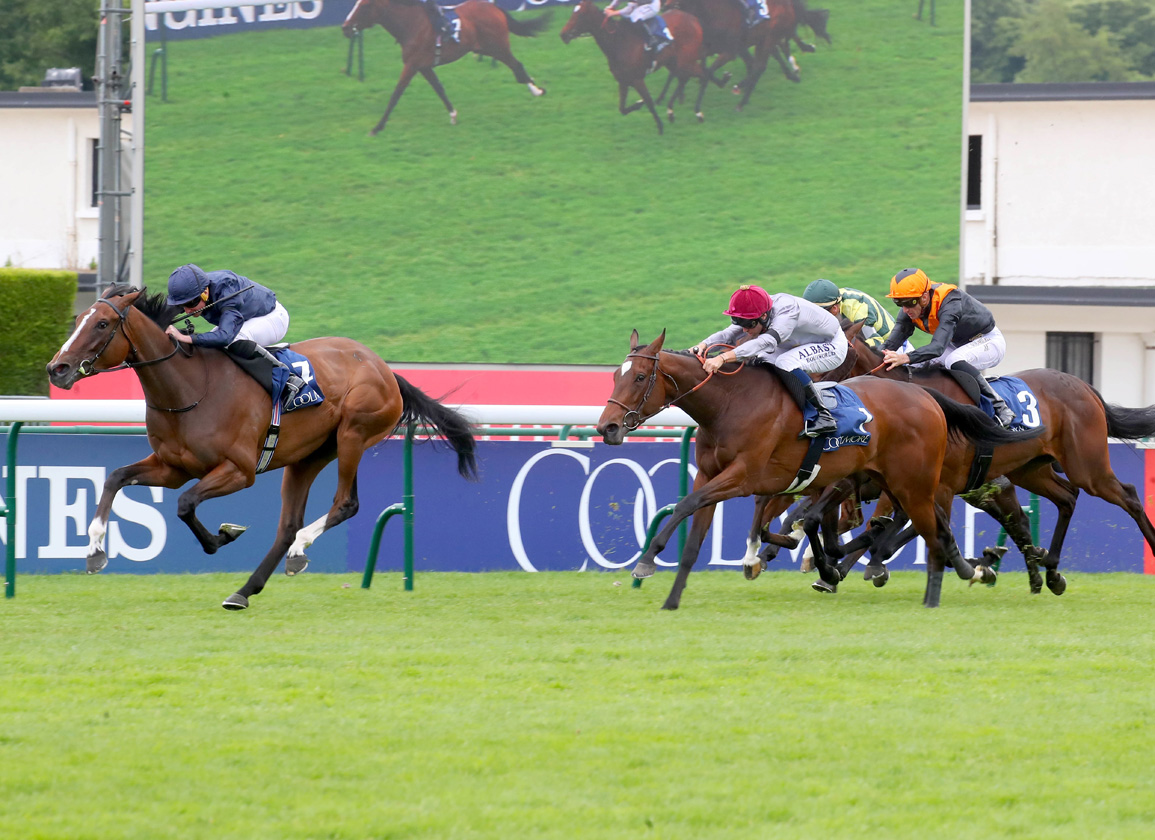 Second best in the May 4 Listed Cheshire Oaks, TDN Rising Star Above the Curve (American Pharoah) made sure she was front and centre where it mattered in Sunday's G1 St Mark's Basilica Coolmore Prix Saint-Alary at ParisLongchamp. Sent up to track the steady pace by Ryan Moore in a close second, the 7-5 favourite was committed with 300 metres remaining and stayed on to deny Place du Carrousel (Ire) (Lope de Vega {Ire}) by a length, with Queen Trezy (Fr) (Almanzor {Fr}) the same margin away in third. “They went steady and that was against her–it turned into a sprint, she's still babyish and is still learning and there is plenty to come,” Moore said of the Joseph O'Brien-trained winner.

Above the Curve, who had earned TDN Rising Star status at the expense of Thoughts of June (Ire) (Galileo {Ire}) in a maiden over this trip at Leopardstown Apr. 6 before losing out to that rival on easier ground tackling an extended 11 furlongs at Chester, could be heading back to Ireland for next start according to Hermine Bastide, representing Coolmore. “She has entries in all the big fillies' races including the Prix de Royallieu and the Prix de Diane, but her next race is likely to be the Pretty Polly Stakes at the Curragh,” he said. “She is a lovely filly and Joseph is delighted with the performance. Maybe she will be bred to St Mark's Basilica in the future. She is lightly-raced and there is probably more room for improvement, she has a lovely temperament and ticks all the boxes.”

Trainer Yann Lerner said of Queen Trezy, “She is so cold it's unbelievable. We fitted her with sheepskins to motivate her, but still she was caught for speed and doing the bare minimum. On the other hand, it is sometimes an advantage for a horse to be so relaxed and it helps on big occasions when you have to deal with the pressure. There is no doubt that a mile and a half will be her game, but I think we will try the Prix de Diane first.”

Above the Curve's dam is an unraced daughter of the revered Mariah's Storm (Rahy), which makes her a half-sibling to Giant's Causeway. Already responsible for the G3 Irish 1000 Guineas Trial and G3 Weld Park S. third Thinking of You, Fabulous is a half to the “Iron Horse's” G2 Cherry Hinton S.-winning sister You'resothrilling which links her to the Galileo clan of Gleneagles (Ire), Happily (Ire), Joan of Arc (Ire) and Marvellous (Ire). Also connected to that sire's G1 Irish Champion S.-winning sire Decorated Knight (GB), she has been bred to Justify for the past three seasons, with 2-year-old and yearling fillies followed by a colt foal.

Just too good! Second in the Cheshire Oaks last time, Above The Curve grabs Group 1 glory in the Prix Saint-Alary at @paris_longchamp for @JosephOBrien2 and Ryan Moore… pic.twitter.com/pb9QHN5iUY