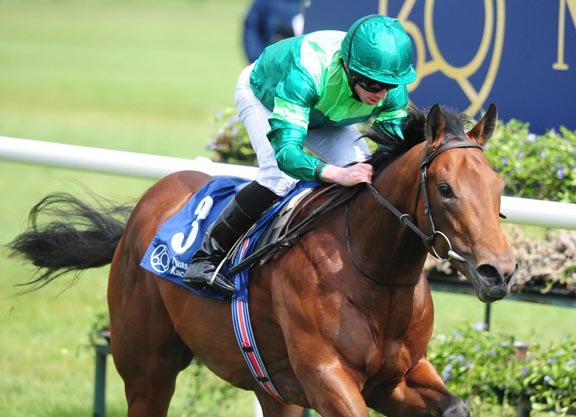 Beaten just over five lengths behind Siskin in last year's COVID-delayed G1 Irish 2000 Guineas June 12, the bay returned on six days' rest to be second in the G3 Jersey S. at Royal Ascot (video) and makes his first appearance since finishing fifth in the G3 Ballysax S. over the Dundalk all-weather last June.

Now conditioned by Douglas Whyte, Congratulation (no 's') has trialled three times and has been the subject of positive reports. His most recent jump-out came over the Sha Tin dirt track Feb. 2 (video), when he ran on nicely from midfield to be second to the talented California Rad (Aus) (Fastnet Rock {Aus}), who he meets again Sunday.

#TheEyecatcher He's the kid from America…

Congratulation debuts off a lofty local rating of 89 in the 110-85 event and will carry 113 pounds, some 20 pounds fewer than top-weighted MGSP Fat Turtle (Aus) (Smart Missile {Aus}). Keith Yeung rides from gate seven in a competitive field of nine.

“He's settled in well and he's a lovely horse–he's obviously thrown in the deep end for his first run, but having said that, he's had a very good grounding with three trials leading in to this and he's progressively improved with every trial,” Whyte told the Hong Kong Jockey Club's Declan Schuster.

He continued, “I'm going in hopeful that he'll run well, the way that he has progressively increased his competitiveness at the trials shows to me that he's at the right frame both mentally and physically to run a race–it's a small field, it's a competitive field but he's got the quality behind him. He's taken time to adjust– he's been running on tracks with a bit of give in them and he's hit the tracks here and it's just taken time for him to adjust to the firmer tracks, which he has done now. He's on the right track–I have no doubt that he is going to show his true ability going forward and it's his first run, but he has a lovely galloping weight–he's certainly in there with a chance.”

Congratulation is a son of Up (Ire) (Galileo {Ire}), a dual winner at Group level in Ireland and second in the G1 Poule d'Essai des Pouliches in 2012, and a half-sister to G1SW Dutch Art (GB) (Medicean {GB}).