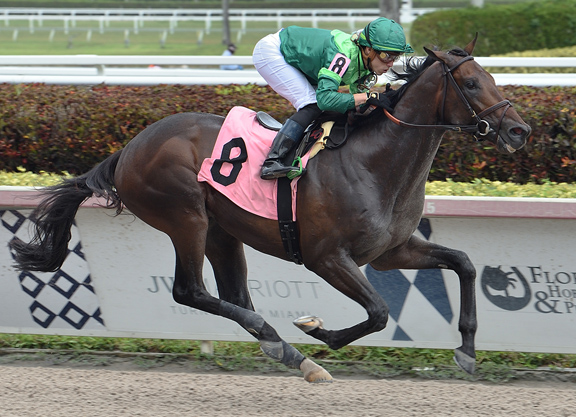 5th-Gulfstream, $38,000, Msw, 4-25, 3yo, 7f, 1:23.25, ft.
BASQUIAT (c, 3, American Pharoah–Divalarious {SP}, by Distorted Humor) was legged up for this debut at Payson Park, closing a formidable worktab with a strong five-furlong move in 1:02 2/5 over the deep surface Apr. 19. The second betting favorite at 19-10, about $3,400 less than 9-5 Ashiham (Tapit), the Brant homebred was asked for a bit of speed by the comebacking Irad Ortiz, Jr. and raced prominently early on behind Chasing Anna (Fast Anna) before taking back into fourth while racing four off the inside. Urged along on the turn, he began to find his best stride three wide into the lane, collared the pacesetter with a little more than a sixteenth to travel and was 1 1/2 lengths clear at the wire. Ashiham, far back early, rallied five wide into the lane and finished with interest for second, two lengths better than Phipps firster Dreams of Tomorrow (Speightstown) in what could prove a key heat. Peter Brant acquired Basquiat's stakes-placed dam for $380,000 carrying the colt in utero at Keeneland January in 2017, about 10 weeks prior to her foaling date of Mar. 26. Divalarious, a daughter of Broodmare of the Year Alidiva (Ire) (Chief Singer {Ire}), is a half-sister to German and Italian champion Taipan (Ire) (Last Tycoon {Ire}), English highweight Ali-Royal (Ire) (Royal Academy) and 1997 G1 Pertemps 1000 Guineas winner Sleepytime (Ire) (Royal Academy). Divalarious, whose 6-year-old son Baskerville (Bernardini) won for the third time in Japan last weekend, is the dam of the yearling colt C'Est Chic (Medaglia d'Oro). Lifetime Record: 1-1-0-0, $22,800. Click for the Equibase.com chart or VIDEO, sponsored by Fasig-Tipton.
O-Peter M Brant; B-White Birch Farm Inc (KY); T-Chad C Brown.