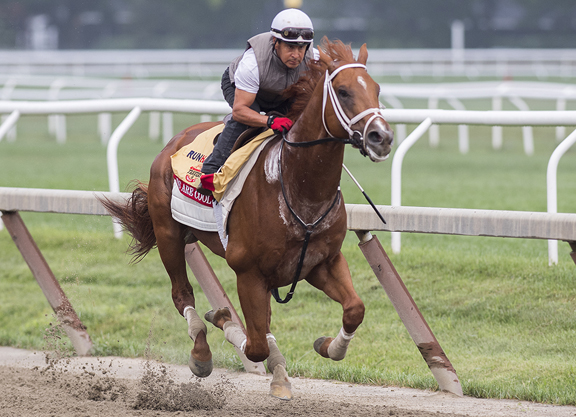 Scars Are Cool training for the 2019 Travers | Sarah Andrew

King Abdulaziz Racetrack in the Saudi capital of Riyadh plays host to the $266,667 Custodian of the Two Holy Mosques Cup (King's Cup) Saturday afternoon, a 10-furlong affair that will produce a handful of runners for the second running of the $20-million Saudi Cup in three weeks' time.

Scars Are Cool (Malibu Moon) won three of his 13 starts in the colors of Sagamore Farm and fetched $175,000 from Saudi Arabian interests during the Horses of Racing Age section of the Fasig-Tipton July Sale last summer. The Florida-bred was well-beaten behind the re-opposing Making Miracles (GB) (Pivotal {GB}) in the Crown Prince Cup over 2400 meters Dec. 26, but dropped back in trip and registered a 3/4-length victory in allowance company going a mile Jan. 15 (see below). Scars Are Cool has gate 16 in a field of 18.

The Khalid Mishrif Bin Shanan-owned Gronkowski (Lonhro {Aus}) and Axelrod (Warrior's Reward) also landed double-digit posts in 11 and 14, respectively, as they attempt to earn their way into the Saudi Cup. Runner-up to Justify (Scat Daddy) in the 2018 GI Belmont S., Gronkowski ran Thunder Snow (Ire) (Helmet {Aus}) to a nose in the 2019 G1 Dubai World Cup and finished a distant 10th to Maximum Security (New Year's Day) in last year's Saudi Cup. He is unraced since. Axelrod, winner of the 2018 GIII Indiana Derby and GIII Smarty Jones S., was ninth in the 2019 World Cup and was last seen finishing runner-up in the G3 Burj Nahaar S. at Meydan last March.

The Custodian of the Two Holy Mosques Cup has a scheduled post time of 11 a.m. ET. Click here for live streaming.

WATCH: Scars Are Cool wins a Jan. 15 allowance in Riyadh