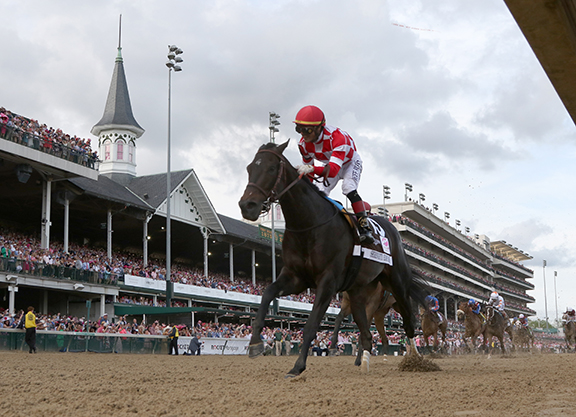 LOUISVILLE, KY – Serengeti Empress (Alternation) bled and was vanned off after finishing seventh, beaten 50 1/4 lengths, at .30 cents on the dollar in the GII Twinspires.com Fair Grounds Oaks Mar. 23.

Taking a major hit late in the win pool to drop to 13-1, the Joel Politi colorbearer cleared the field-thought to be loaded with other speed, at least on paper–from post 13 as Positive Spirit (Pioneerof the Nile) clipped heels, stumbled badly and lost her rider before a pinked-out crowd of 105,719 on what turned out to be a pleasant spring day after heavy morning showers.

The $70,000 KEESEP yearling purchase led comfortably beneath Jose Ortiz into the clubhouse turn as announcer Travis Stone reported that Positive Spirit was corralled by the outriders.

Serengeti Empress sped through an opening quarter of :23.25 and let it out a notch or two to lead by three lengths through a sharp opening half-mile in :46.65 over the drying-out fast going. Ortiz took a look back approaching the quarter pole and had to like what he saw as Serengeti Empress was still going strong.

Liora (Candy Ride {Arg}), meanwhile, made a bold run at Serengeti Empress into the stretch, but the pacesetter responded well to several left- and right-handers from Ortiz down the lane to win going away by 1 3/4 lengths. Runner-up Liora was 5 1/2 lengths clear of third-place finisher Lady Apple (Curlin).

Champion Jaywalk (Cross Traffic), victress of the 2018 GI Breeders' Cup Juvenile Fillies at Churchill Downs, was disqualified from sixth and placed last for squeezing Positive Spirit at the start.

“She's such a fast filly,” said Ortiz, who will ride Tacitus (Tapit) in Saturday's GI Kentucky Derby. “She took me to the front and she fought the entire way around there. This is an incredible win. Tom [Amoss] gave me a lot of confidence in her. I had never been on her, and he told me, 'Ride her like you own her.' And that's what I did.”

This was by far the biggest victory of perennial leading trainer Tom Amoss's career, who has saddled no fewer than 3,638 winners.

“Well, I have never won a race this big in my entire life, and I have been training since 1987,” Amoss said. “I just had so many emotions and they were going through my head so fast. As you can tell from the way I'm talking, I'm usually not at a loss for words, but my head is spinning right now.”

Serengeti Empress, a 19 1/2-length winner of the GII Pocahontas S. beneath the Twin Spires last September, was a disappointing seventh in the Breeders' Cup Juvenile Fillies in the fall. The Indiana Downs debut winner delivered a sharp, front-running win over Liora in the GII Rachel Alexandra Mar. 23 prior to her aforementioned episode in the Fair Grounds Oaks.

“She bled outwardly [in the Fair Grounds Oaks], and they gave her a precautionary ride back to the barn area on the horse ambulance,” Amoss said. “I called it that morning after [her final] work a 'wow' work. And most importantly, on that particular day, we treated her therapeutically just as we were going to treat her for the Kentucky Oaks. So it was important that not only she worked well, but that she didn't have a bleeding episode. So we scoped her afterwards and she was clean. I called Joel and I said, 'We're a go. We're going to go in the race.'”

Politi, an orthopedic surgeon from Columbus, Ohio, has been a horse owner for more than a decade. Serengeti Empress was his first stakes winner.

“My dad grew up in Egypt, loved going to the track,” Politi said. “They migrated through Europe to wind up getting over here. He was a physician, and once he got settled, he went to the track, and we had some $1,500 claimers at Waterford Park (now Mountaineer Park) and that's how he got going. And I was at the track all the time. So it was a passion of my dad's that I loved, and it was a joy, a treat for me to go to the track. I have been going since forever, and here we are.”

One of two graded winners for her Pin Oak-based sire and former 'TDN Rising Star,' Serengeti Empress is the lone runner from her dam, a daughter of Argentinian Group 3 winner and UAE Oaks third Love Dancing, who was bought back on a bid of $34,000 carrying the filly at Keeneland November in 2015. Havisham was reoffered back in foal to Alternation at KEENOV in 2016, hammering for $12,000, and produced a full-sister to Serengeti Empress in 2017, her last listed produce.

Bellafina Off the Board…

Bellafina (Quality Road), favored at 9-5 off an ultra-impressive win in the GI Santa Anita Oaks Apr. 6, raced as far as ninth in the early stages and never turned in a serious stretch rally to finish fifth, beaten eight lengths. “I think that it was the distance that did her in today,” trainer Simon Callaghan said. “I think she wants to run in one-turn races. We'll give her a break now and refocus on one-turn races. We may look at the [GI] Test [S. at Saratoga Aug. 3] next.” Jockey Flavien Prat added, “She broke a little slow but she always does. In California, with a five-horse field, you are not that far back after [a slow] break. The break was not the issue. I thought I was in a good spot, but when it was time to fire, she just didn't.”

Positive Spirit, a half-sister to GI Kentucky Derby winner Always Dreaming (Bodemeister) and double-digit length heroine of last term's GII Demoiselle S., walked back to trainer Rodolphe Brisset's barn under her own power and didn't appear to suffer any significant injuries, according to the American Association of Equine Practitioners on-call vet Dr. Al Ruggles. “From what we understand at this point, it's likely a soft-tissue injury,” Dr. Ruggles said. “Sometimes there can be a little bit of skin lacerations. Sometimes it's just losing a little bit of hair. But that will all be evaluated.” Jockey Manny Franco added, “I clipped heels out of the gate. I'm OK.”