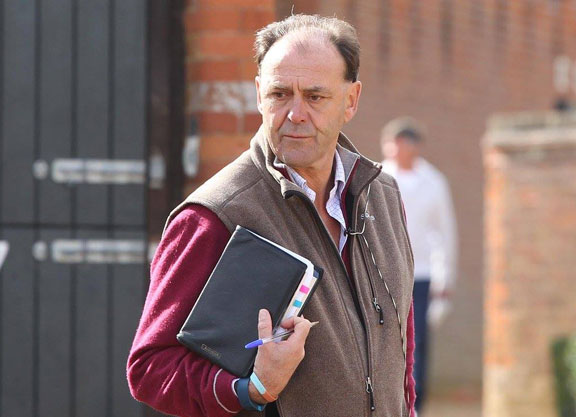 A knee chip sustained while running in the G3 Greenham S. on Sunday has knocked Shadwell's Alkumait (GB) (Showcasing {GB}) out of action until the autumn. The colt won a Goodwood maiden second up in July, and then added the G2 Mill Reef S. at Newbury on Sept. 19 prior to a last-placed run in the G1 Dewhurst S. on Oct. 10. Shelved until Apr. 18, the bay ran seventh in the Greenham over seven furlongs.

Shadwell Racing Manager Angus Gold said, “Sadly he's come out of it with a little chip on a knee, which we're going to have to take out. Apart from anything else, I think the run confirmed he doesn't stay, even if a chip on a knee was hardly going to help him.

“I think he's going to be a sprinter, but he'll miss the whole of the summer and we'll try to get him back in the autumn.”

Another Shadwell G1 QIPCO 2000 Guineas hopeful that will skip the May 1 Classic is Mujbar (GB) (Muhaarar {GB}). Also a group winner as a juvenile taking the Oct. 24 G3 Horris Hill S., the bay colt will instead point to the G1 French 2000 Guineas on May 16. He ran eighth in the Greenham in his 3-year-old bow.

“All his best form last year was definitely with give in the ground and I think we learned the other day he would prefer it easier. He was also far too keen, anyway,” Gold added of Mujbar. “Hopefully we've got that out of him now on his first run back and we might look at the French Guineas or something like that. We'll see how he does between now and then, but he won't be going to Newmarket for the Guineas.”

'TDN Rising Star' Mutasaabeq (GB) (Invincible Spirit {Ire}) is still a potential Guineas contender, but his next start has not been confirmed. A winner at Newmarket in October, he earned 'Rising Star' status with a six-length drubbing of his contemporaries in a seven-furlong conditions stakes at HQ on Apr. 13.

Gold added, “No decision has been made yet. We'll wait to hear from Sheikh Hamdan's family whether they would like to supplement him for the Guineas or head towards [Royal] Ascot and go the more gentle route.”