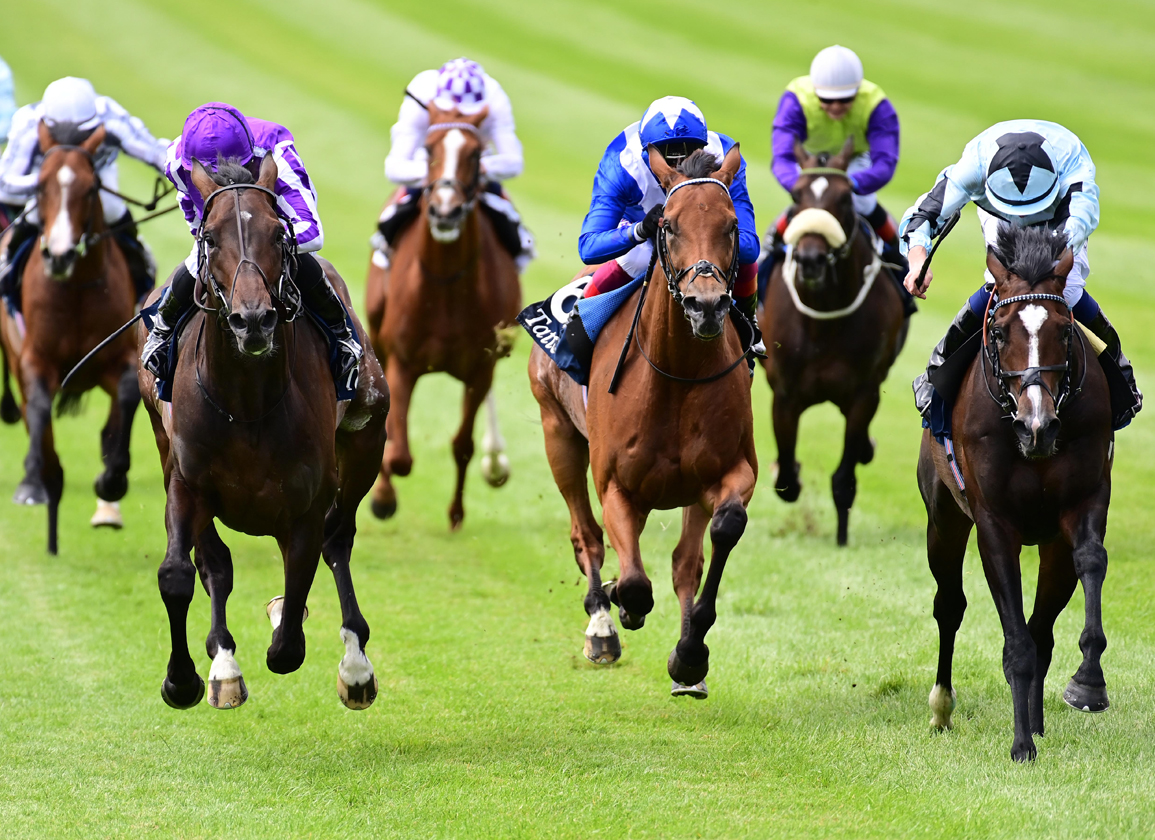 The William Haggas show had another stirring episode at The Curragh on Sunday as M M Stables' Alenquer (Fr) (Adlerflug {Ger}) came out on top of a thrilling finale to a G1 Tattersalls Gold Cup which will be recalled for some time. Last year's G2 King Edward VII S. winner had lost a front shoe when a gallant sixth in the Mar. 26 G1 Dubai Sheema Classic when last seen, having readily beaten Lord North (Ire) (Dubawi {Ire}) previously in the G3 Winter Derby at Lingfield Feb. 26, and was accorded due respect at 7-2 in this fascinating renewal. Kept handy by Tom Marquand as Ryan Moore finally unlocked the abundant talent of the frustrating High Definition (Ire) (Galileo {Ire}) with a no-nonsense front-running ride, he was at work turning for home and continued to graft all the way up the straight as Ballydoyle's 20-1 shot clung on at the head of affairs. The 2-1 joint-favourite Lord North was the first to crack inside the final furlong, but Alenquer kept digging in to deny the upset in the final stride and prevail by a neck. The other joint-favourite State of Rest (Ire) (Starspangledbanner {Aus}) ended up the same margin away in third, in front of Lord North but never able to land a serious blow in an epic encounter of middle-distance heavyweights.

Alenquer strikes for the red-hot William Haggas and @TomMarquand combination in a race to remember at @curraghrace pic.twitter.com/DHtd13G1Vq

“We had hoped he had this in the tank and came here with barely an inch to find with the top horses–there were a couple of little things that didn't go our way in Dubai and we had valid excuses and this is testament to his attitude,” Marquand said after his first ride in Ireland. “At the two pole, I was more worried about Lord North than High Definition but there was a question mark about his stamina and in the end it was no mean task pegging back the runner-up. He really had to dig deep there and it is a stiff last furlong. It is wonderful for William Haggas and the team at home, because he is not the easiest.”

Alenquer may have entered the G3 Sandown Classic Trial last April a 25-1 shot, but he emerged to make a mockery of those odds by beating Adayar (Ire) (Frankel {GB}), Yibir (GB) (Dubawi {Ire}) and Lone Eagle (Ire) (Galileo {Ire}) in what has come to represent one of those races that was foretelling a big story. Left out of the Derby mix, he was sent to Royal Ascot to garner the King Edward prior to missing the break and finishing a distant third to Hurricane Lane (Ire) (Frankel {GB}) in the G1 Grand Prix de Paris in July. Again well adrift of a bigwig when six-lengths second to Mishriff (Ire) (Make Believe {GB}) in York's G1 Juddmonte International the next month, the bay was sent to the G1 Prix de l'Arc de Triomphe but wound up ninth after trying to force the issue from the front.

Having been dogged by testing ground for most of his 3-year-old campaign, Alenquer showed the kind of pace and strength that connections had always believed was there on his comeback when putting Lord North to the sword in the Winter Derby on Polytrack. Beaten only just over a length in the Sheema Classic racing on three plates, he had ideal conditions returning to Europe in this hot contest and ultimately again had too much stamina for the Gosdens' dual G1 Dubai Turf hero, too much pace for the GI Saratoga Derby Invitational, G1 Cox Plate and G1 Prix Ganay winner State of Rest and a smidgen more class on the day than the revitalised TDN Rising Star High Definition. Putting the performance in context, last year's winner Helvic Dream (Ire) (Power {GB}) was last, beaten over 11 lengths, while the 2021 runner-up Broome (Ire) (Australia {GB}) could only manage fifth.

William and Maureen Haggas are operating at a near 50% strike-rate at the moment and have now won nine black-type races since the previous Saturday when Baaeed (GB) took Newbury by storm. Maureen had the pleasure of representing Somerville Lodge and said, “He was ridden beautifully by Tom. He knows him really well and the horse is as hard as nails. The more you ask the more he gives. He's always been a nice horse, but he keeps surprising us a bit. I think ground is important and it is on the slow side here. He won over a mile and a half at Ascot last year, but his top-class form is over a mile and a quarter. I thought he had a hard enough race today, but looking at him there is not a bother on him.”

Alenquer, who was a super-find by Armando Duarte at only 80,000gns at the 2019 Tattersalls October Yearling Sale Book 1, further advertises the prowess of his late sire for whom he was the sixth group 1 winner. He is the second foal out of Wild Blossom (Ger) (Areion {Ger}), a half-sister to the Listed Junioren-Preis winner Wilder Wein (Ger) (Soldier Hollow {GB}) from a family replete with black-type winners. The third dam is the influential Waitotara (Ire) (Habitat), ancestress of Hong Kong's champion stayer Mr Medici (Ire) (Medicean {GB}), the G3 Prix Miesque winner and G1 Preis der Diana runner-up White Rose (Ger) (Platini {Ger}), the G2 EuropaChampionat winner Wild Side (Ger) (Sternkonig {Ire}) and her triple group-winning daughter Wild Coco (Ger) (Shirocco {Ger}). Wild Blossom also has an unraced 3-year-old filly by Zarak (Fr), a 2-year-old colt by Galiway (GB) bought for €100,000 by Haras de Meautry at the 2020 Arqana December Breeding Stock Sale, and a yearling colt by The Grey Gatsby (Ire).