Alda Seeks BC Berth in Natalma 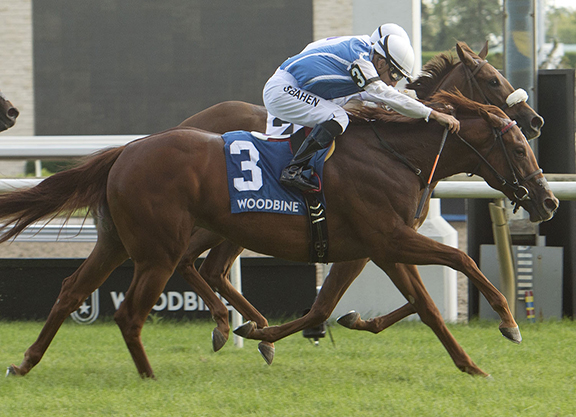 Wertheimer and Frere homebred Alda (Munnings) will attempt to keep her hot streak going and secure a post in the gate for the GI Breeders' Cup Juvenile Fillies Turf Sunday in Woodbine's GI Natalma S. A second-out graduate at Belmont July 9, the Graham Motion trainee captured the Catch a Glimpse S. going 6 1/2 panels on the local lawn Aug. 23. Finishing second that day was Dreaming of Drew (Speightster), who romped by six lengths in her main track graduation here July 18.

Jimmy Toner ships one in who certainly has the pedigree of a Grade I winner in Seasons (Tapit), daughter of Winter Memories, who won seven graded events, two of which were Grade Is. Seasons won her debut going two turns at Saratoga Aug. 9.

Another debut winner jumping up the class ladder here is Charles Fipke homebred Lady Speightspeare (Speightstown), who donned cap and gown by 3 3/4 lengths in a seven-panel event on the Woodbine lawn Aug. 22. Big Big Plans (Point of Entry) also enters off a first-out graduation, winning by six lengths in a $25,000 maiden optional claimer on the synthetic Aug. 20.

Completing the field are a pair of maidens in Sleek Lynx (GB) (War Front) and Stunning Princess (Cairo Prince). Trained by Mark Casse, Sleek Lynx finished a half-length second as the favorite in a one-mile turf event at Gulfstream July 23. Danny Gargan pupil Stunning Princess was runner-up in a pair of 1 1/16-mile tests on the Saratoga lawn July 23 and Aug. 19. The bay receives Lasix for the first time in this “Win and You're In” event.