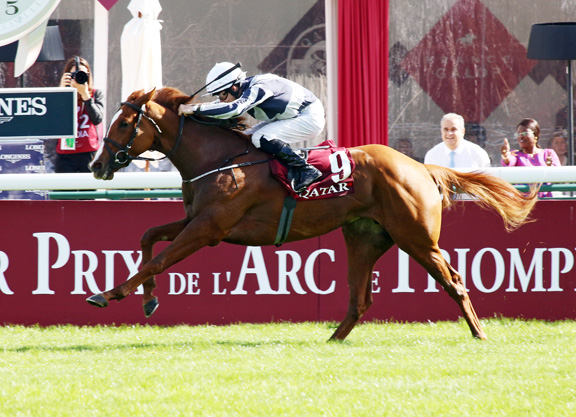 Jessie Harrington has begun the season with a flourish and all the stars could be aligned for Albigna (Ire) (Zoffany {Ire}) to provide a first Classic success in Saturday's G1 Tattersalls Irish 1000 Guineas at The Curragh. The Niarchos family's homebred has stronger claims at this stage of her career than the 2018 heroine Alpha Centauri (Ire) (Mastercraftsman {Ire}), having won the six-furlong G2 Airlie Stud S. here in June and G1 Prix Marcel Boussac at ParisLongchamp in October before finishing fourth in the GI Breeders' Cup Juvenile Fillies Turf. “She's in great form, she's going to be very fresh and well, but she has been away to The Curragh twice so at least she has been on the lorry and done a gallop away from home,” her trainer said. “She just didn't quite get round the first bend at Santa Anita, then flew home. She ran great out there and came home from America really well. She did well all over the winter. Her draw [in 13] is not great, but we will hope for the best.”

Drawn outside of Albigna in 14 is Fancy Blue (Ire) (Deep Impact {Jpn}), one of the Coolmore partnership's four representatives but one who has perhaps the greatest attention on her as Donnacha O'Brien's first Classic runner. Unbeaten and successful in the Listed Staffordstown Stud S. over this course and distance in October, the relative of High Chaparral (Ire) approaches her big test in top order according to O'Brien Jr. “She's gone very strong and she's grown a little bit, so she's done very well from two to three. We're very happy with how things have gone,” he said. “She's adaptable ground-wise, I wouldn't mind a bit of juice as she bends her knee and won on slow ground at The Curragh last year. I'm not too concerned either way, but I'd be happy if it was good ground or around that.”

Donnacha's brother Joseph O'Brien has a duo in Mark Dobbin's outsider Brook On Fifth (Ire) (Champs Elysees {GB}) and Healthy Wood Co Limited's New York Girl (Ire) (New Approach {Ire}). The latter was breaking her maiden on only her second start in the G3 Weld Park S. over seven furlongs here in September and their trainer said on Friday, “They are both in good form and New York Girl has done nothing wrong. The step up to a mile will suit well, as she will be seen to best effect over further as the season goes on. We're hoping for a good run, but it's a very hot race.”

There is obviously the usual Ballydoyle presence too, with a duo from that establishment adding to a total of five trained by the O'Brien family. Seamie Heffernan is on the Listed Montrose Fillies' S. runner-up Peaceful (Ire) (Galileo {Ire}), who earned 'TDN Rising Star' status on her prior start when scoring by seven lengths over this trip at Thurles in October having been ninth on debut behind another 'TDN Rising Star' in the Aga Khan's Ridenza (Ire) (Sea the Stars {Ire}) over seven furlongs at Leopardstown in August. Ridenza sustained an injury during that race and trainer Mick Halford will be performing a masterclass if he can produce her to win this on her first subsequent start. “She's a beautifully-bred filly, by Sea the Stars out of a good mare we had called Raydara, who won the [G2] Debutante for us,” he said. “She's always shown us plenty from the very beginning and we always liked her, so it was no surprise she won at Leopardstown. Ronan [Whelan] gave her a beautiful ride on the day from a bad draw and she was very professional. Unfortunately for us and for her she returned to the unsaddling enclosure and was lame, it turned out she had fractured her pastern. She had an operation the next morning and stood in for a couple of months. She's progressed really well since then, she took the operation really well and her recovery was good. We've brought her along slowly and she's in very good form now.”

Also on The Curragh's card is the G2 Lanwades Stud S., with the much-travelled Magic Wand (Ire) (Galileo {Ire}) having a rare domestic outing following a winter chasing major international prizes. Successful in Flemington's G1 Mackinnon S. in November, the 5-year-old ran a short-head second in the G1 Hong Kong Cup the following month before filling the same spot for the second year in Gulfstream Park's G1 Pegasus World Cup Turf Invitational Jan. 25. Given a break since her subsequent ninth in the Feb. 29 Saudi Cup on dirt, she has to give three pounds to all including Tan Kai Chah's unexposed impressive Listed Garnet S. winner Silk Forest (Ire) (Kodiac {GB}).

Newbury also hosts a fascinating card, with the G3 Diomed S. seeing the return of last year's G1 St James's Palace S. runner-up and 'TDN Rising Star' King of Comedy (Ire) (Kingman {GB}). Staged over 113 yards shorter than when traditionally staged on Epsom's Derby day card, another of the races to be moved courses in this unusual period also features last year's winner Zaaki (GB) (Leroidesanimaux {Brz}). John Gosden said of Lady Bamford's homebred, “King of Comedy is finding his way back and will come on a great deal for any race he has, though he did make a winning start at Yarmouth last year. The track and the distance will suit him.”

Earlier on the Berkshire venue's fixture is the Listed Abingdon Fillies' S., which could prove the main English pointer to the G1 Epsom Oaks with its ideal positioning three weeks ahead of that Classic. Cheveley Park Stud's 'TDN Rising Star' Cabaletta (GB) (Mastercraftsman {Ire}) beat the impressive subsequent winner Frankly Darling (GB) (Frankel {GB}) on her sole start at Yarmouth in October and trainer Roger Varian is expecting a bold show. “Cabaletta is training nicely and is coming into herself at the right time. She stays well and will handle softer conditions, as it was testing conditions when she won at Yarmouth,” he explained. “The form doesn't need talking about, as we all saw how the second Frankly Darling won up at Newcastle. She is a filly with a bright future and this is a lovely starting point for her. A track like Newbury on easy ground will suit her well.”

Lining up against Cabaletta is Kirsten Rausing's Oriental Mystique (GB) (Kingman {GB}), the David Simcock-trained daughter of their G1 Qipco British Champions Fillies & Mares S. heroine Madame Chiang (GB) (Archipenko). She beat the impressive subsequent handicap winner Declared Interest (GB) (Declaration of War) and the Listed UAE 1000 Guineas scorer Dubai Love (GB) (Night of Thunder {Ire}) when last seen at Kempton in November and is as exciting a prospect as there is among the 3-year-old filly ranks.

John Gosden relies on Juddmonte's Franconia (GB) (Frankel {GB}), who was second on her debut at Chelmsford in November. “She is a nice filly and she ran well first time out on her only start. She was ready to run in a mile-and-a-quarter fillies' maiden earlier on, but as that was lost she is running over the same trip in a listed race. It is just typical of what has happened this year–you have to do some slightly unconventional things. I've been very happy with her. She is still learning as she is not that experienced, but it's a nice, big galloping track which is nice for a filly like that.”