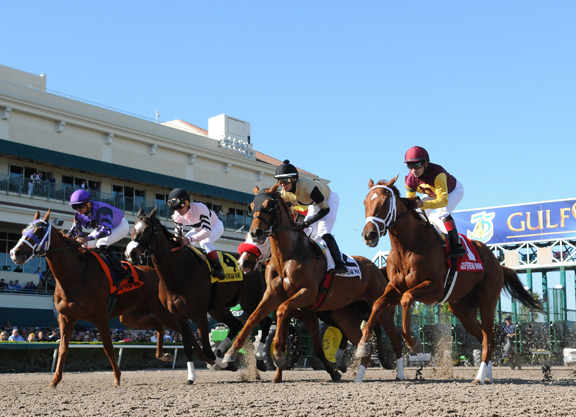 The distance from Northlands Park in Edmonton, Alberta to Gulfstream Park in Hallandale Beach, Florida is 3,004 miles. For Jakobs Rocket Girl (Kantharos), it was worth the trip.

In the here's-something-you-don't-see-everyday department, Jakobs Rocket Girl shipped in from the tiny track in Western Canada and whipped a field of Florida-bred maidens Wednesday at Gulfstream Park. Ridden by Tyler Gaffalione, she won the six-furlong race by 7 1/4 lengths for trainer Ralph Nicks.

“It was a very impressive race to watch,” Nicks said. “I expected her to give us a good effort. But I thought there would be better ones down the road for her. Off today's effort, I was very happy with her.”

The filly was purchased at the August 2015 OBS Yearling Sale for $15,000 by Ben McElroy, agent. A few months later, the filly came to the attention of bloodstock agents Nick Sallusto and Hanzly Albina, who bought her privately on behalf of owners Norm Castiglione and Robert Vargo, who race under the name of Riversedge Racing Stables. Sallusto said they paid only slightly more than what they filly went for at the sale.

“I'm guilty of being partial to the sire because Hanzly and I bought Kantharos as a yearling,” Sallusto said. “We've been a bit partial to him as a sire for some time. One thing that was evident about her right away was that she had a lot more leg than most of them do and stood over a lot more ground than most of them do. She is very attractive and has really, really beautiful parts to her. She seemed like a logical horse to buy.”

Castiglione and Vargo are among the top owners in Western Canada and prefer to have their horses run in that area. They've run just two horses at Gulfstream, both of them at the current meet.

Jakobs Rocket Girl made her debut Oct. 19 in a 3 1/2-furlong maiden race at Northlands, somehow managing to lose. But her connections were impressed enough with her second-place effort that they decided they needed to test the filly against better.

“We thought this filly, being a Florida-bred, maybe should [get] an opportunity here,” said Sallusto, who also acts as the racing manager for Riversedge. “We thought she ran very creditable in her first race. And we needed to get her back going for this season one way or another. So we decided to give her to Ralph Nicks and assess what level of talent she really has. If it didn't work out we could always send her back to Western Canada. Once Ralph got her up to five-eighths in her works we could see that she had some ability. So we gave it a whirl.”

Because this was a Florida-bred race, there were no Todd Pletcher or Chad Brown-trained entrants that costs six or seven figures at the sales. But the runner-up was in fact a $385,000 yearling buy named Overture (Congrats). She is owned by WinStar and trained by Bill Mott.

“After today, she looks like she can compete against Florida-bred stakes caliber horses, and I believe they'll have some of those races here for here over the summer,” Sallusto said. “The logical step would be to keep her in South Florida with Ralph and see how she progresses. If she's better than that, Ralph keeps horses in New York in the summer. If she's good enough she'll have the chance to compete in open company. In a way she already did today. The second-place filly, despite being a Florida-bred, is more of a Kentucky-bred and was very well meant.”