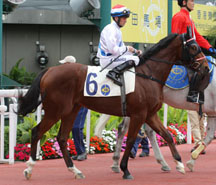 Amber Sky (Aus) (Exceed and Excel {Aus}–Truly Wicked {Aus}, by Rubiton {Aus}), Hong Kong’s champion ‘griffin’ horse of 2012 who rose to Group 1 heights less than two years later in the Al Quoz Sprint, has been retired from the races, according to information from the Hong Kong Jockey Club.

Bred in Victoria by O E and D R Pope Pty Ltd., the A$80,000 Inglis Easter Yearling graduate was the premier 1000-metre horse in Hong Kong, scoring by a dominating 5 1/2 lengths in the 2014 Centenary Sprint Cup (video) before blitzing his rivals in the Al Quoz beneath Joao Moreira, clocking the fastest opening 800m sectional in a five-furlong sprint at Meydan (:44.55), according to Trakus data (video). Among the vanquished on that occasion were defending champion Shea Shea (SAf) (National Emblem) and the following year’s hero Sole Power (GB) (Kyllachy {GB}).

Though he peaked on a domestic rating of 122 and was held winless over the last three seasons, Amber Sky remained competitive at the minimum trip, finishing third to 2017 Al Quoz hopeful Amazing Kids (NZ) (Falkirk {NZ}) in a Group 3 in October and closing out his career with a third to reigning champion griffin Mr Stunning (Aus), also a son of Exceed and Excel, in a Class 1 Mar. 5.

Trained throughout his career by Ricky Yiu, Amber Sky retires with seven wins from 28 appearances and earnings of US$1,814,060.