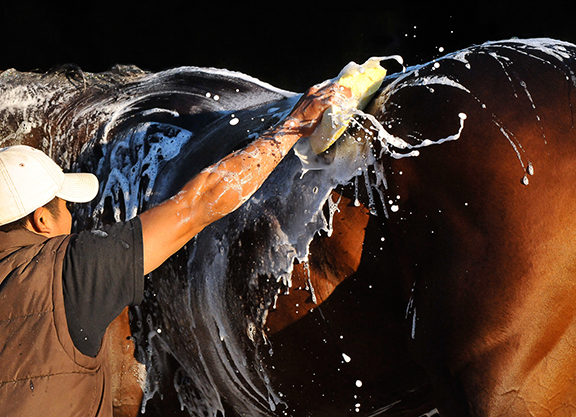 Tuesday afternoon, the Thoroughbred Owners of California (TOC) announced that the California Thoroughbred Business League (CTBL) board had “unanimously approved” a $2-million subsidy from its reserves to be paid to Post Time Self Insurance Group–the self-insured workers' compensation program for trainers in the state.

As part of the deal–which took some three months to negotiate–the various stakeholders have agreed to the creation of a new position of “Director of Safety,” who will help establish and regulate uniform safety standards and implement them across all California training and racing facilities. Th

“It's just a more robust program than we've had in the past,” Michael Lyon, program administrator of Post Time, told the TDN Wednesday.

Currently, trainers are routinely given safety training sessions and materials to review quarterly, said Lyon. The program's new director of safety–who could be in place by July 1–will be “on site,” and will “review with the trainers their safety practices, helping them to address areas that maybe need addressing.”

The director will also be looking for “compliance” with these new safety protocols–what Lyon described as a set of best practices. “We have never implemented an experience modification factor in our program, but it definitely could be part of the program going forward,” he said.

These protocols will be draw-up by industry representatives, including the trainers, said Lyon, who added that the position could come from someone within the industry itself.

Earlier in April, the Post Time proposed a plan to invoice trainers $1,233 per horse retroactively for the first quarter of 2020, to help fill financial shortfalls. Though the proposal was subsequently dropped, it gave a nod to long-gestating revenue problems within the program, which relies on three funding mechanisms: a stall-per-day fee of $3.70, per-start fees, and a slice of wagering revenue, which works out to 0.5% of money placed on exotic wagers.

According to Lyon, the $2-million shortfall applies to “prior year losses.” For example, within the first two years of Post Time operating, there were two “catastrophic” injuries that were “policy limit claims,” meaning they were claims higher than $1 million, said Lyon. Post Time covers the first million, while excess coverage provides funding for the rest.

This overall shortfall has been exacerbated by the suspension of live racing in California as a result of Covid-19. “With no wagering, the subsidy fund takes a hit,” said Lyon, who added that wagering provided the biggest source of income for the program.

When asked how prevalent the problem of lax safety standards is in California barns, Lyon replied that, “in any given quarter, 85 to 90% of our trainers do not have an injury.”

“There are some trainers who have several injuries, but those trainers tend to have the bigger barn,” he added. “I don't think there's a culprit as much as there's things that can be improved on to make everyone better.”

As for the possibility of the stall-per-day fee increasing in the future, Lyon said that it's under consideration. “We haven't yet had a chance to analyze the overall impacts and make adjustments if necessary,” he said.

“We spent substantial time over the last three months working with the trainers and Post Time to develop substantial improvements in the workers' comp program, including significant safety initiatives,” said Nick Alexander, TOC Chairman and representative on the CTBL board, in the press release Tuesday. “I especially want to thank Tim Yakteen, Post Time president and southern California vice-president of CTT [California Thoroughbred Trainers], for his important input and the countless hours he contributed to the process.”

“We greatly appreciate this funding from the CTBL,” said Yakteen, in Tuesday's press release. “It was vital for the CTT to find an alternative to having the money come out of trainers' pockets to fund the 2018 Post Time funding shortfall due to negative claim development for that year. We feel that the agreement we reached is one that trainers will wholeheartedly support.”