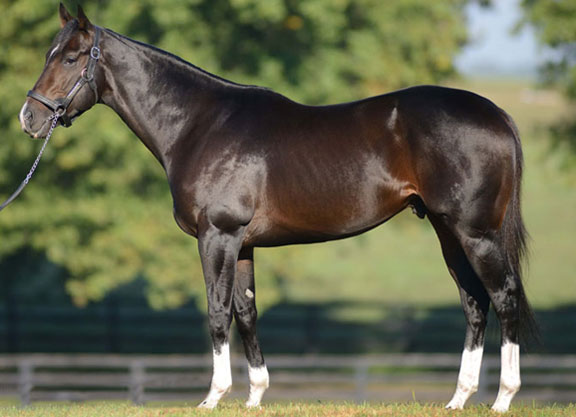 The number-one sophomore sire of 2018, Violence took a step backward last year. It happens. The problem is that the marketplace can be unforgiving and ready to move on from any stallion that isn't the hottest of commodities. So Hill 'n' Dale was proactive, dropping Violence's stud fee from $40,000 to $25,000. At that price, he may go down as one of the best bargains among all stallions this year.

“Last year, we had some bad luck on the racetrack,” said Hill 'n' Dale President John Sikura. “A few horses got hurt. There were some disappointments. He got quiet and we thought, to be fair to the marketplace, we'd stand him for $25,000 this year. That would give everyone an opportunity after a bit of lull in his career.”

It appears that Violence, a son of Medaglia d'Oro, was priced competitively as Sikura reports that Violence will serve a full book of quality mares this year.

“I think people viewed the $40,000 to $25,000 as a disappointment, or an admittance of failure,” Sikura said. “But we didn't view it that way at all. When you're a little bit quiet, you need to give people an opportunity, and people are responding. He's going to breed another really good, full book of mares this year. Sometimes, you sort of have to be a contrarian or jump on something when people are uncertain. That's how you make money in the horse business.”

It's too early to tell if Violence's offspring will rebound in 2020, but they are off to a good start. Though he has been racing solely against Louisiana-breds, Violence's son No Parole is considered a serious contender for the GI Kentucky Derby. That's how impressive he has been in three race that he has won by a combined 34 lengths. He was named a 'TDN Rising Star' when winning an allowance race at the Fair Grounds on Jan. 11. That same day, Violence picked up a rare double as he had two 'Rising Stars.' The other was Violent City, a four-length winner in his debut, a maiden special weight race at Gulfstream.

“I'm not apologizing at all for the horse,” Sikura said. “I recognize that last year was a little quiet on the race track. But it looks like we're resurgent now and, hopefully, what we're seeing is just the tip of the iceberg so far as great success and him achieving what everybody hoped and thought he would achieve. That is to be a top, top sire.”

Trained by Todd Pletcher, Violence won the GII Nashua S. in his second career start. In search of a Grade I win, he ventured west for the 2012 GI Cash Call Futurity at Hollywood Park and won again. Considered a top threat for the 2013 Kentucky Derby, he finished second in the GII Fountain of Youth in his 3-year-old debut behind eventual Derby winner Orb but did not race again. Following the Fountain of Youth, Pletcher reported that Violence had sustained a fracture to his right front medial sesamoid.

“He's a big, handsome horse and he's a Grade I winner,” Sikura said. “When he got hurt, it was really an opportune time for us. He got hurt in February or March and it's always hard to sell a horse at that time of year. There was an opportunity to get in and buy the horse when the competition wouldn't have been as thick as it would have been if the horse retired in November, right on top of the breeding season.”

Sikura thought from the start that Violence had a chance to be an outstanding sire.

“Physically, he's big handsome horse by Medaglia d'Oro,” he said. “He has a great pedigree, by a preeminent dirt family. He had all the requisites of a horse who could be a really important sire.”

His first crop, which hit the racetrack in 2017, got off to a solid start. But it was 2018 when Violence's offspring started to really assert themselves. He had 12 stakes winners that year.

“This horse, he got off to a great start,” Sikura said. “They were big, handsome horses. People succeeded in the sales ring and succeeded on the racetrack, whether it was colts or fillies. He had a turf angle and was very successful as a turf sire. They ran short, they ran long. He looked poised to be the next really important young sire and, maybe, the heir apparent to Medaglia d'Oro.”

For Violence, 2019 was far from a bad year. He was the third-leading third crop sire, but the numbers were down. And people noticed.

“In this business there are trends, fads,” Sikura said. “Popular today, not as popular tomorrow. It's the herd following.”

Perhaps Violence would have done just fine at $40,000, but Sikura didn't want to take any chances. Now he has a stallion who is off to a fast start this year and is priced right.