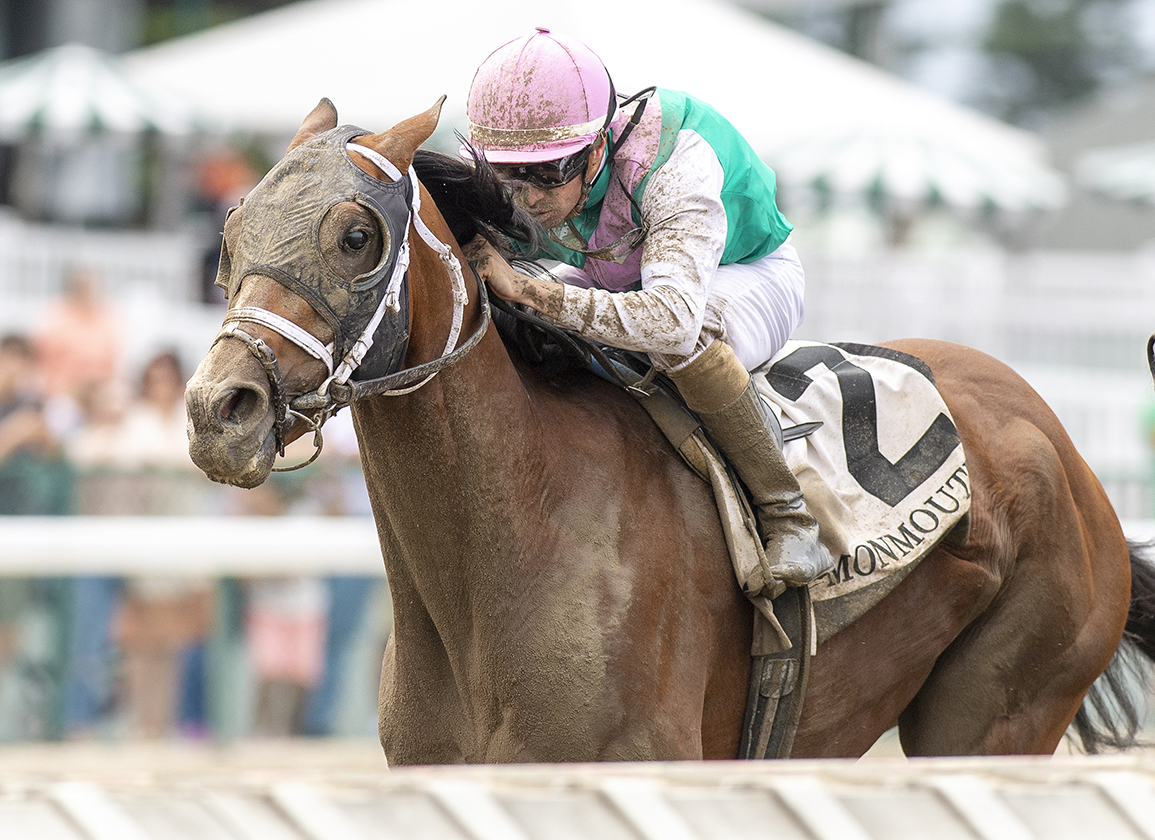 Mandaloun (Into Mischief) finished second in the GI Kentucky Derby and will be declared the winner if Medina Spirit (Protonico) is ever disqualified for a betamethasone positive. He didn't cross the wire first in the GI Haskell S. either, but was awarded the win after the stewards disqualified Hot Rod Charlie (Oxbow) for interference. It pays to be both lucky and good.

But a page has been turned and Mandaloun will kick off his 4-year-old season Saturday at the Fair Grounds in the GIII Louisiana S., the first step in a campaign where he very well could prove that he can win at the Grade I level without the assistance of the stewards or a drug testing laboratory.

“You're always looking forward to a horses maturing and getting faster as they get older,” said his trainer, Brad Cox. “He's trained really well and his gallop-outs are really good. He's in a really good place right now, mentally and physically. I think this is a good spot to get him back started and see where he takes us.”

Mandaloun, 26-1 in the Derby, exceeded most expectations to finish second, a half-length behind the Bob Baffert-trained Medina Spirit. More than eight months later, there hasn't been a word from the Kentucky Horse Racing Commission about Medina Spirit's positive, one reason among many that it could take years for the 2021 Derby to be declared official. It's not something that Cox is worried about.

“I don't think about it,” Cox said of the Derby. “I really don't and that's because it is out of my hands. I've got enough going on that I don't need to worry about what ifs or what's going to happen. It's not the way you want to win a race of that caliber, so we'll just keep marching forward and develop Mandaloun and do enough with him to try to enhance his resume and get him off to the stallion barn where he can make some big, beautiful babies.”

Mandaloun skipped both the GI Preakness S. and the GI Belmont S. before resurfacing at Monmouth Park. He won the Pegasus, a prep for the Haskell, and then finished a nose behind Hot Rod Charlie in the the Haskell. Hot Rod Charlie was disqualified for bothering Midnight Bourbon (Tiznow).

“He was coming back on Hot Rod Charlie that day,” Cox said. “Obviously, Hot Rod Charlie got to the wire first, but I think that in a couple more jumps we could have got to him. It was a very courageous race and he showed a lot of grit and determination. It was really good race and it made him a Grade I winner.”

Mandaloun has not raced since the July 17 Haskell.

“He was asking for a break,” Cox said. “I wasn't real happy with his weight post-Haskell. He had two long ships from Churchill and it was really hot at Monmouth when he was there. He wasn't quire right. We did all the diagnostics on him and we never did find anything. We gave him some time and he's come back a fit, happy, healthy horse.”

In most Grade IIIs, a horse with Mandaloun's resume would be a heavy favorite, but he has to contend with Midnight Bourbon once again. It will be the fifth meeting between the two. Midnight Bourbon won last year's GIII Lecomte S. over Mandaloun but Mandaloun finished in front of his rival the next three times they met, including in the Derby where Midnight Bourbon was sixth. Midnight Bourbon is making his first start since finishing third in the Nov. 26 GI Clark S. at Churchill Downs.

“We've won this race twice and this is definitely the toughest edition we've ever been part of,” said Cox, who will also send out GIII Oklahoma Derby winner Warrant (Constitution) in the Louisiana. “Midnight Bourbon is a very good horse and I think they're thinking the same way we are, that this is a stepping stone to bigger and better things down the road. It's an opportunity for both horses to race out of their own stall, get a race under their belts and get their year kicked off.”

Cox said that Mandaloun's schedule beyond the Louisiana has yet to be determined, but the Feb. 26 GI Saudi Cup could be next for the colt owned by Juddmonte.

“(Juddmonte General Manager) Garrett O'Rourke will get together with the Juddmonte team and come up with a game plan in regards to the Saudi Cup and see of that is something we want to turn our attention toward,” Cox said. “For me, the mindset is it's one step at a time. Hopefully, he makes a good account of himself Saturday and then a race like the Saudi Cup could be part of his future.”

Cox has lost a likely Eclipse Award winner in Essential Quality (Tapit) to the breeding shed where he will soon be joined by former stablemate Knicks Go (Paynter). The latter, a cinch to be named Horse of the Year and champion older male, will be retired after starting in the Jan. 29 Pegasus World Cup Invitational S. That will leave a big void in the Cox barn, but he's optimistic it is one that Mandaloun can fill.

“This horse has always trained well,” Cox said. “Since the fall of his 2-year-old season we thought he was a horse that could take us to the Kentucky Derby, and he did. Had a great season last year and we're hopeful he can do even better this year.”