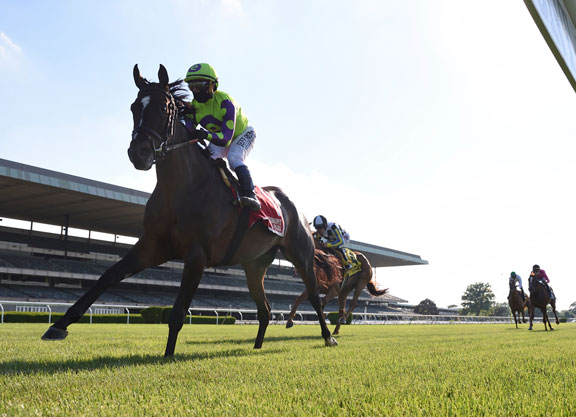 The race was just a $20,000 maiden claimer, but the importance of the moment was not lost on Belmont track announcer John Imbriale, who welcomed racing back to New York Wednesday.

“We can finally say…they're off and running at New York's Belmont Park,” Imbriale called out as the field burst from the gate. And as Star of the West (Flashback) crossed the wire to win the opener, Imbriale once again recognized that this race was something special. “It's now official. New York sports is back and beautiful Belmont Park is back,” he said.

Imbriale could hardly be blamed for hamming it up a bit. It had been a long time.

For the first time since a Mar. 15 card at Aqueduct, racing, which had been shut down due to the coronavirus, was held at an NYRA track.

“It means the world to me [to be back racing in New York]. I grew up watching NYRA racing,” said Reylu Gutierrez, rider of Star of the West and New York native. “I stayed here throughout the pandemic. I stayed working. I was galloping, jogging and breezing horses. Whatever it takes to earn my place here at NYRA. Winning the first race back means the world. I'm just battling to earn my place here. I shed a little tear after the wire because it really does mean a lot to me.”

Even New York's tabloids, which usually ignore racing, got in on the act. The back page of the New York Post featured Belmont and the headline, “And They're Off.”

Prior to the first race, the jockeys gathered in the paddock and a moment of silence was held in honor of those who lost their lives due to the pandemic. They then kneeled as a group in solidarity with peaceful protestors.

What followed was a card that went off without a hitch and was well received by bettors.

“It's exciting,” said NYRA CEO Dave O'Rourke. “It's been 80 days since we last actually raced. To get back is a little bit of normalcy during what has been a really weird time.”

Even the weather cooperated. The forecast called for showers throughout the afternoon, but it rained only briefly and all the races stayed on the grass.

“The handle numbers in the industry are strong,” O'Rourke said. “The channels are different and the margins are different, but our expectations are that handle should be strong on the gross numbers. We want to demonstrate that we can do this.

On the racetrack, a sentimental favorite was beaten as Fauci (Malibu Moon) finished a distant second as the even-money favorite in the third race. In the first 2-year-old maiden race of the year in New York and the first without Lasix in decades, the Todd Pletcher-trained, Mike Repole-owned Prisoner (Violence) was the winner.

There will be a stakes race on every day of the abbreviated 25-day meet, which kicked off with the GIII Beaugay S., won by Rushing Fall (More Than Ready). The riding star was Irad Ortiz Jr., who had five wins.

“We have fresh turf and fresh horses,” O'Rourke said. “So far as the racing goes, it should be a great meet.”

Between Fox Sports and MSG+, there will be 127 hours of live television coverage for the meet. But the broadcasts came at the cost of losing TVG, which will not be showing the New York races during this meet. But O'Rourke said that he expected the increased coverage on Fox and MSG+ will help drive handle.

“Our TV presence will be greater than we've ever had and that will help handle,” he said. “A lot of how we do at this meet will depend on our TV platform.”

Looking forward, O'Rourke said he was hopeful that owners would be allowed to attend the races in Saratoga.

“We're still working with the state,” he said.. “Everything will be about numbers and our demonstrating that we can run safely. Our hope would be at Saratoga we can get owners and connections in. We're not ready to ask for that and they're not ready to grant it. We'll have to see how the COVID-19 numbers for the state look in early July before we get any kind of answer on that.”

Starting next week, Belmont will run on a Thursday-through-Sunday schedule before racing shifts to Saratoga July 16.