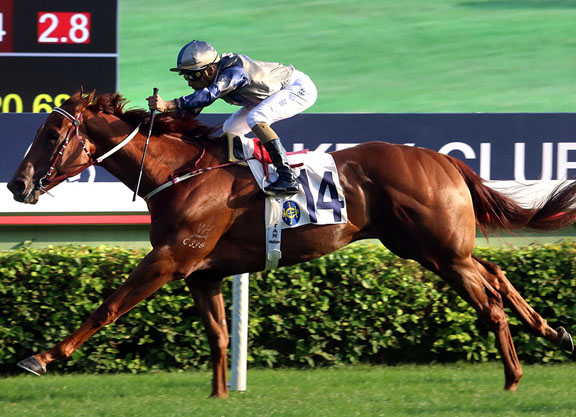 The hulking chestnut was perfect and untouched in three runs last season, but stubbed his toe when a keen third in his Class 2 debut over 1200m last October. He clocked :54.69 when taking out a five-furlong test 11 days later and walloped the jurisdictions best short-trackers in the G2 Jockey Club Sprint the following month. He couldn't quite repeat the dose on international day, surrendering late to finish just off the now-sidelined Beat the Clock (Aus) (Hinchinbrook {Aus}) and the re-opposing Hot King Prawn (Aus) (Denman {Aus}). He's been sidelined since, having spiked a fever following his harried preparation and a trip to Dubai for the G1 Al Quoz Sprint was also ruled out. Trainer John Moore is expecting a bold performance in this lead-up to the G1 Chairman's Sprint Prize in three weeks' time.

“He's ready for his return and we're expecting a big run from him on Sunday,” the conditioner told HKJC's David Morgan. “This is his preliminary bout to get him tuned up and in the zone for the big one at the end of the month.”

The afternoon's co-featured G2 Chairman's Trophy over the metric mile features the Moore-trained two-time defending Horse of the Year Beauty Generation (NZ) (Road to Rock {Aus}) against John Size's ascendant miler Waikuku (Ire) (Harbour Watch {Ire}). The latter, runner-up in the 2019 BMW Hong Kong Derby, has defeated Beauty Generation on each of their four most recent meetings, but the champ showed he retains a fair bit of his macho bravado with a half-length defeat of Ka Ying Star (GB) (Cityscape {GB}) for a third consecutive success in the G1 Queen's Silver Jubilee Cup (1400m) Feb. 16.

The Chairman's Trophy is the course-and-distance prep for the G1 FWD Champions Mile Apr. 26.