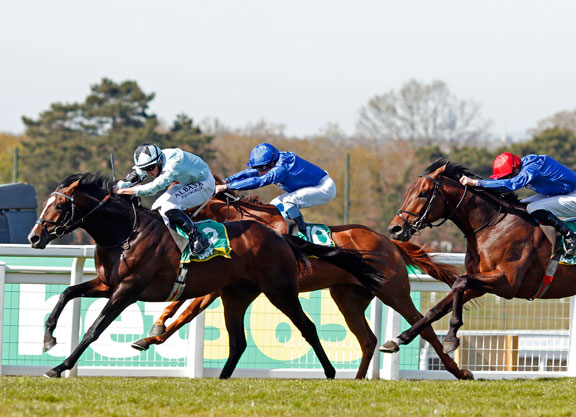 One of the lesser-fancied 3-year-old colts in the line-up for Friday's G3 bet365 Classic Trial at Sandown, M M Stables' Alenquer (Fr) (Adlerflug {Ger}) nevertheless emerged front and centre with no hint of fluke as he split the Godolphin duo of Adayar (Ire) (Frankel {GB}) and Yibir (GB) (Dubawi {Ire}). Runner-up in the Listed Ascendant S. on soft ground at Haydock in September, the William Haggas-trained 25-1 shot was sent forward from the break by Tom Marquand and made certain that Yibir was unable to enjoy an easy time there. Attacking that rival three out with stamina assured as Adayar tried to emerge from a pocket back in the pack, the bay had first run on the imposing Charlie Appleby second-string and kept galloping relentlessly to score by half a length. Adayar, the race's major eye-catcher, had a neck to spare over his stablemate Yibir at the line. “He had only had two runs last year and the second was on horrific ground at Haydock, so he's certainly not the finished article yet,” Marquand said. “Every time he was joined, he fought back and is still learning. He'd never really had the chance to flatten out and run to the line before, so he's still quite raw. He's obviously got plenty of talent and promises to stay an extra couple of furlongs, but when he straightens out it might be that he shows us more speed than we thought.”

Alenquer had impressed when winning by 2 3/4 lengths on testing ground over seven furlongs at Newbury in August before meeting his match in the smart Hannon trainee Fancy Man (Ire) (Pride of Dubai {Aus}) in the Ascendant, but remained unexposed in what is widely-regarded as the best renewal of this Derby prep for some years. With the G3 Zetland S. scorer and 7-2 favourite Lone Eagle (Ire) (Galileo {Ire}) 4 1/2 lengths back in fourth and the unbeaten Listed Criterium du Languedoc winner Belloccio (Fr) (Belardo {Ire}), the G3 Solario S. winner Etonian (Ire) (Olympic Glory {Ire}) and Ballydoyle's Sir Lucan (Ire) (Camelot {GB}) well beaten this stood up to its billing. It also comes in the month that the German bloodstock industry was hit by the early demise of Adlerflug, Germany's champion sire last year who was responsible for the talented In Swoop (Ire).

Charlie Appleby said of the second and third, “Adayar and Yibir have finished off their races well and I am very pleased with their efforts. Yibir has stuck at it all the way to the line, while Adayar stayed on well. They have put up two very solid performances and a step up in distance could be on the cards for both colts, who look nice middle-distance horses for the rest of the season.” Yibir's jockey William Buick added, “I'm delighted with him–he ran a great race and as last year he got better with racing I expect it will be the same this year. I loved the way he battled back and he'll definitely get further. The runner-up is a lovely horse too and I guess he could step up as well.”

Alenquer is the second foal out of Wild Blossom (Ger) (Areion {Ger}), who is a half-sister to the Listed Junioren-Preis winner Wilder Wein (Ger) (Soldier Hollow {GB}). This is the family of the Hong Kong champion stayer Mr Medici (Ire) (Medicean {GB}) and group-winning top producers White Rose (Ger) (Platini {Ger}) and Wild Side (Ger) (Sternkonig {Ire}), with the latter being responsible for the G2 Park Hill S. winner and G1 Prix Vermeille runner-up Wild Coco (Ger) (Shirocco {Ger}). The dam's 2-year-old filly is by Zarak (Fr), while her yearling colt by Galiway (GB) was a €100,000 purchase by Haras de Meautry at the Arqana December Breeding Stock Sale.