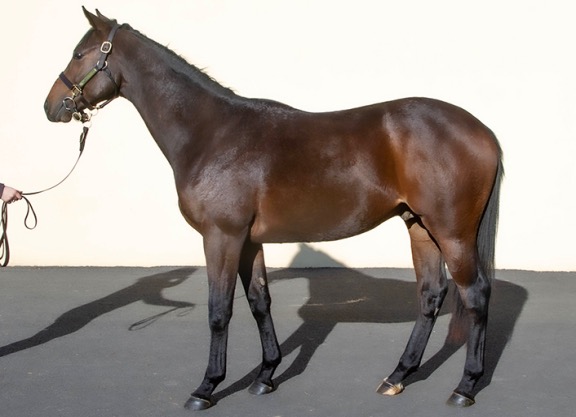 DEAUVILLE, France—France is one of the few countries in Europe where it is still relatively easy for people to go racing, so a short stroll down the road to Hippodrome La Touques from the Arqana sales complex was a perfect pre-sales outing, with the day's two black-type races well timed to be observed before action got underway in the ring.

The winner of the G3 Prix des Reservoirs, Rougir (Fr) (Territories {Ire}), not only provided her first-season sire Territories (Ire) with his first group winner but also gave a boost to last year's Arqana August Sale, where she was bought from Haras de l'Hotellerie for €55,000. She had also been the first winner for Territories on June 10 at Chantilly, when she posted her first of three victories, as well as running third in the G1 Qatar Prix Marcel Boussac on Arc weekend.

Back at Arqana, the trade dropped a notch during the second sessionn of the October Sale, where the day's takings for 115 horses sold came to €3,046,000. The average was €26,487 and the median was €20,000, both of which are tricky to assess in comparison to last year's markedly different sales format. A promising marker, which has been a factor at most of the 2020 yearling sales across Europe, was the clearance rate of 82%. Horses are still being traded, albeit at a reduced level in a challenging year.

The market leader for much of the day was Haras de Bourgeauville's colt by Adlerflug (Ger), the sole offering by the leading German stallion in the catalogue. The Francis Graffard-trained In Swoop (Ger), who became the first French-based winner of the G1 Deutsches Derby and then gave Sottsass (Fr) (SIyouni {Fr}) a run for his money when second in the Arc, showed just what the under-used stallion is capable of, and the session-topping colt was one of nine purchases by Federico Barberini so far at this sale. Offered as lot 248, the half-brother to the Listed Brown Panther S. winner Alveena (GB) (Medicean {GB}) will be trained in England after being bought for €85,000 for an undisclosed client of the Italian agent.

The colt's dam Aliyfa (Ire) (Spinning World), a half-sister to the G1 Irish St Leger and G1 Prix du Cadran winner Alandi (Ire) (Galileo {Ire}), was bought by Bourgeauville from the Aga Khan Studs at the 2017 Goffs November Sale for €125,000 when carrying to Siyouni (Fr). The stud sold the resultant filly for €120,000 at the August Sale last year.

Two fillies shared the second spot on the leader board at €75,000, the first to reach that mark being a Wildenstein-bred daughter of Authorized (Ire) (lot 287)  out of the lightly-raced Peintre Celebre mare Blue Picture (Ire). The filly's grandam is the G1 Prix de Diane and G1 Prix de l'Opera winner Bright Sky (Ire) (Wolfhound), and she was bought by Mags O'Toole from the La Motteraye Consignment.

Al Shaqab Racing has been active throughout the October Sale at Arqana and bought the top lot on day one, the €525,000 colt by Siyouni (Fr), as well as signing for one of the more prominent yearlings of Tuesday's session, with 16 horses bought across the two days.

Lot 333, picked up for €75,000, had extra commercial appeal as a daughter of the record-breaking first-season sire Mehmas (Ire), and she is out of the four-time winner Epatha (Ire) (Highest Honor {Fr}), who was bred by and raced for the late Marquesa de Moratalla and has thus far produced four winners. The filly was bought as a foal last December by Tina Rau for €20,000.

Part 2 of the October Yearling Sale continues in Deauville on Wednesday from 2 p.m.