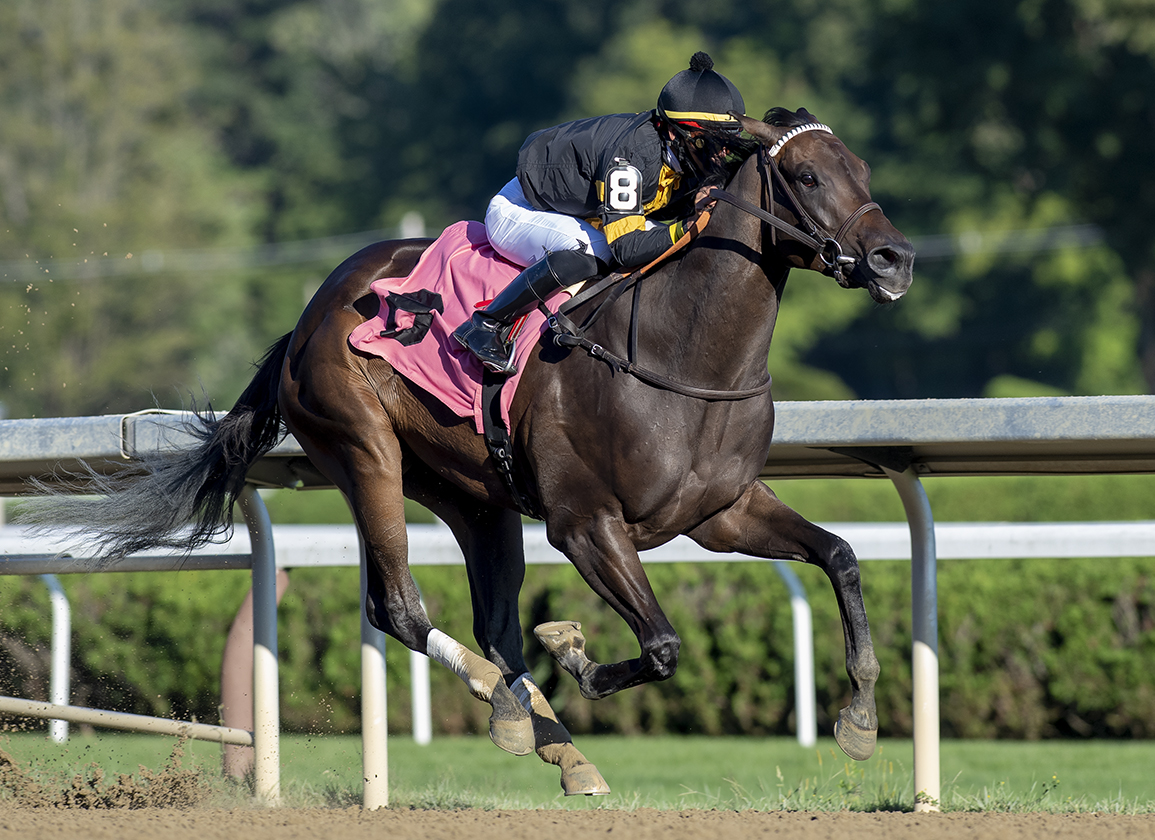 In a summer full of impressive and promising performances in allowance races at Saratoga, it was the Sept. 4 run of a total no-name who could've been had by anyone in the sport for just $10,000 months earlier that stood out the most on the speed-figure scale. And Saturday, modestly-bred Baby Yoda (Prospective) will try to back that monster effort up while making his stakes debut against four rivals in Belmont's GII Vosburgh S., a Win and You're In qualifier for the GI Breeders' Cup Sprint.

Debuting for owner Gerald Burns and trainer Charles Frock in a bottom-level, $10,000 maiden claimer in the Pimlico slop May 30, Baby Yoda broke a step slowly, pressed the pace and drew clear powerfully in the stretch to an eight-length graduation. Once again offered for a tag, albeit a much higher one at $62,500, in an allowance/optional claimer there June 26, the gelding once again was away a beat tardily and pressed the pace, but finished third. He improved his Beyer figure 10 points from his debut, however, and Wachtel Stable, Pantofel Stable and Jerold Zaro had seen enough, diving in to privately purchase him and move him to Bill Mott's barn. Continuing his progress with a starter allowance success July 14 at Saratoga, the dark bay announced himself to the racing world with a 4 1/4-length allowance score there Sept. 4, stopping the clock in 1:14.33 for 6 1/2 furlongs and earning an eye-popping, meet-topping 114 Beyer.

Firenze Fire (Poseidon's Warrior), who sports a stellar record of seven wins in 11 starts at Belmont, returns downstate off a very eventful Saratoga run of his own. In one of the strangest scenes ever witnessed in a Grade I race, the 6-year-old appeared on his way to a score in the GI Forego S. Aug. 28 at the Spa, but, in a clip now seen by most everyone in the industry, cost himself the victory by trying to bite eventual winner Yaupon (Uncle Mo) for a solid eight strides before being corrected late and falling a head short.

“It's amazing. I must have watched it 100 times,” said owner Ron Lombardi. “It's amazing how he stayed with Yaupon while trying to bite him Another two strides he would have won it, not that he would have stayed up. It's made him a rockstar. It may have cost me a few dollars, but he's definitely getting a lot of attention.”

Following Sea (Runhappy) will look to rebound after a pair of somewhat disappointing efforts this summer. Starting his career two-for-three earlier this year with a pair of blowout sprint victories, the 'TDN Rising Star' stretched out to two turns in the GI TVG.com Haskell S. and backed up to finish third, beaten 18 1/4 lengths, before being elevated into second when Hot Rod Charlie (Oxbow) was famously disqualified for crowding Midnight Bourbon (Tiznow) and nearly forcing that rival to go down. He then was no match for the brilliant Jackie's Warrior (Maclean's Music) or Life Is Good (Into Mischief) when running third, beaten nine lengths, last out in the GI H. Allen Jerkens Memorial S. Aug. 28 at Saratoga

Rounding out the field are Jalen Journey (With Distinction), who was promoted via disqualification to a score in the GIII Frank J. De Francis Memorial Dash S. last out at Laurel, and Good Effort (Ire) (Sharmadal), who makes his U.S. debut after running second in a pair of Group 3's earlier this year, one on dirt at Meydan and one on synthetic at Newcastle.