Accelerate to Lane's End Upon Retirement 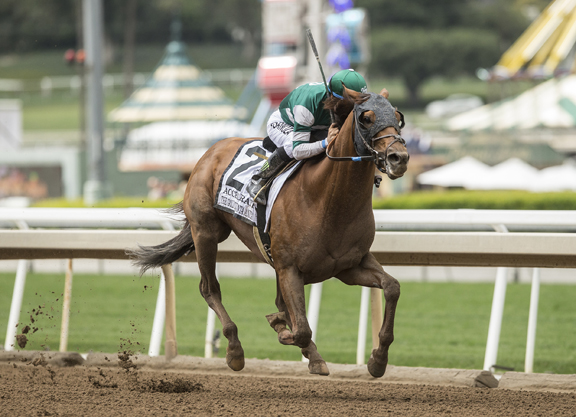 Multiple Grade I winner Accelerate (Lookin at Lucky–Issues, by Awesome Again) will stand at Lane's End Farm at the conclusion of his racing career, the farm announced Wednesday.

“Accelerate has proven to be the best mile and a quarter horse in training in America,” said Lane's End's Bill Farish. “In his five starts this year, he's won four, including three Grade Is and has run three of the five fastest Beyers all year: 115, 111, 110.”

Campaigned by Hronis Racing and trainer John Sadler, Accelerate was most recently a romping 12 1/2-length winner of the Aug. 18 GI TVG Pacific Classic at Del Mar. His 2018 campaign has also included victories in the GI Santa Anita H., GI Gold Cup at Santa Anita and GII San Pasqual S. He bested champion Arrogate to take last year's GII San Diego H. and, as a sophomore in 2016, he won GII Los Alamitos Derby and was third behind Tamarkuz and Gun Runner in the GI Breeders' Cup Dirt Mile.

“Accelerate has been a superstar from the beginning,” Sadler said. “He was a good 3-year-old, running third to two very good horses in the Breeders' Cup, he beat Arrogate as a 4-year-old, and this year he's proved he is one of, if not the best, active horses in America.”

“Accelerate is the kind of horse that we seek out, that we believe in,” Lane's End owner Will Farish said. “Tough, sound, fast, Classic distance handicap horses. These are the type of racehorses that have made Lane's End Stallions what it is today.”

“We have been very fortunate to own a horse of Accelerate's caliber,” said Kosta Hronis. “Undoubtedly, he will be an exciting addition to the Lane's End roster and we look forward to following his stallion career upon retirement from racing.”