Op/Ed: A Year Without Derby Makes Most Sense 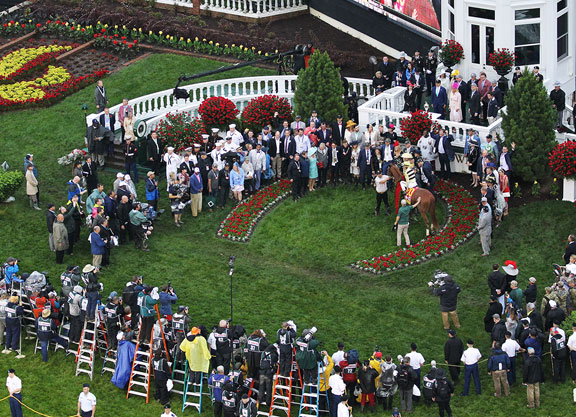 A few weeks ago, I felt like a lone wolf howling in the wind (not the first time). I was calling for Keeneland to call off its April meet and for Churchill Downs to go ahead and announce the cancellation of the Kentucky Derby.

Based on what I knew of the coronavirus spread in other countries and that it had reached our shores, it seemed obvious to me that within days we would begin cancelling events at a rapid pace.

The first sports leader to acknowledge such was NBA Commissioner Adam Silver, who shut down his league for a month. In just a matter of days, most other sports fell like dominoes.

Now, of course, both Keeneland and Churchill Downs took the actions I expected and most other racetracks have correctly shut down for live racing.

Churchill subsequently announced the Derby would be contested Sept. 5, the Saturday of Labor Day weekend, thus four months after its originally scheduled date.

Without a doubt, the Derby is the world's most recognizable and important race. It is the sport's once-a-year opportunity to make new fans, to perhaps capture the imagination of someone who at some point will be able to invest in the industry.

As a Kentucky-bred myself, there is no greater day each year of my life than the first Saturday in May when the Derby is run.

And that fact brings me to the point of this column.

The Derby cannot be the Derby unless it is run the customary first Saturday in May.

I understand the importance of running it, and understand the economic impact the race has on Churchill Downs, its shareholders and its horsemen. It also has a tremendous and profound impact on those who simulcast the race (and its undercard), the city of Louisville and the state of Kentucky.

Tourism is big in Kentucky, but never more so than on the days surrounding the Derby.

That being said, I would suggest that when the race is run Sept. 5–if the coronavirus has abated to allow it to be run–it not be called the Derby.

One thing that makes a Derby winner so special is that the race is run so early in a horse's 3-year-old season. Though the methods employed by trainers to point a horse to the Derby have changed dramatically over the years, the date of the race is the constant.

It simply is not the same to win the race at a time of year when many 3-year-olds have not even celebrated their actual third birthday as it will be for whoever wins the race in September.

By September, many horses will have made more starts and raced longer distances than many previous Derby starters and winners, particularly in recent years.

In addition, most horses that were being pointed to the Derby will now have to be rested, then geared back up for a race in early September.

For these, and other reasons, comparing the 2020 Derby victor to past winners will not only be impossible but illogical.

For this year, and this year only, I suggest Churchill change the name of the race. Call it the Louisville Derby or Jefferson County Derby. Do not put the horse's name on Churchill Downs, do not inscribe the name on the collectible Derby glass, and do not adorn the winner with a garland of roses.

Do not list those connected to the horse–the owner, breeder, trainer, jockey, sire–as having been part of a Derby winner.

Instead let them be celebrated as the connections of the winner of the “race to be named later,” a significant accomplishment in a year in which the racing calendar was thrown a nasty curveball.

Let 2020 be the year the Derby was not run. The history books will note the coronavirus was the reason.

It is hard for a Kentuckian, a lover of racing and its traditions, to suggest such a thing. But it actually is holding on to tradition– that Derby winners are paraded in the winner's circle the first Saturday in May.