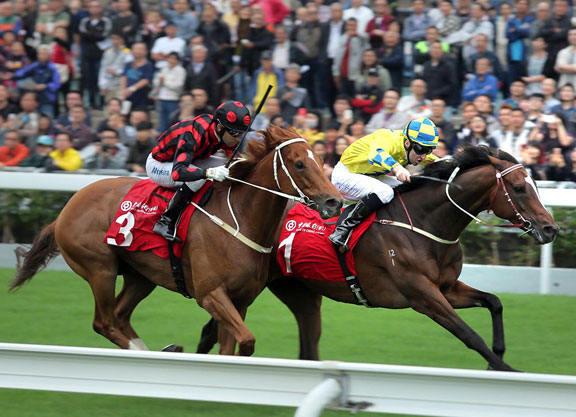 With an ageing core of middle-distance runners in Hong Kong, it was all there for the taking during the last racing season for Werther (NZ) (Tavistock {NZ}), the 2016 BMW Hong Kong Derby hero who smashed his elders in the G1 Queen Elizabeth II Cup. But when injury intervened, he was forced to miss the first half of the year, including the G1 Longines Hong Kong Cup, all the more frustrating given that he returned to something approaching his best with two Group 1 successes later in the season. There have been no such hiccups this time around, and with his second-up success in Sunday’s G2 BOCHK Jockey Club Cup, he was winning for the fourth time in five course-and-distance runs and secured a spot at the top of the market for the HK$25-million main event three weeks down the line.

Drawn gate one, Werther settled in about fourth spot early on, but where many thought it would be Time Warp (GB) (Archipenko) cutting out the pace, it was instead Werther’s longshot stablemate Harbour Master (Mizzen Mast) doing so, with Time Warp doing the chasing just ahead of Nassa (SAf) (Dynasty {SAf}) in third. Tommy Berry began to stoke up Werther midway on the second turn, and the Horse of the Year quickly advanced into a striking position off the home corner. Time Warp and Joao Moreira got first crack at the outclassed Harbour Master and went for home, but despite getting five pounds from Werther, could not resist the favourite in the final 50 metres. Nassa stayed on up the inside for third from Gold Mount (GB) (Excellent Art {GB}), who closed his final half-mile in :45.12 in a useful trial.

“That was a cracking good run considering it was his second run this season,” Moore, who was registering a fifth success in the race, told the HKJC’s David Morgan. “His fitness was really tested and he will improve for this run. The speed that Harbour Master went up front today really tested his fitness level, which wasn’t 100%. We got away with it and now we go to the Hong Kong Cup. He’ll come away from this race in better fettle for that grand final.”

Werther is one of four Group 1 winners for his Cambridge Stud-based stallion and one of his sire’s two Derby winners bred from mares by Cambridge’s legendary Zabeel (NZ). A third, Tavago (NZ), has Zabeel as the sire of his second dam. Bagalollies, the Broodmare of the Year in New Zealand in 2016, has had a standing date with Tavistock since producing Werther, and Werther’s year-younger full-brother Gobstopper (NZ) earned a first black-type success in Saturday’s G3 New Zealand Cup at Riccarton. The mare’s foal of 2014, a filly, was purchased by Sona Bloodstock for NZ$300,000 at the 2016 NZB Select Yearling Sale. Her 2015 produce, another full-sister to Werther, was knocked down to Damon Gabbedy’s Belmont Bloodstock Agency for A$400,000 at this year’s Inglis Easter Yearling Sale. Bagalollies foaled a third straight filly in 2016, but was not covered in the most recent breeding season.