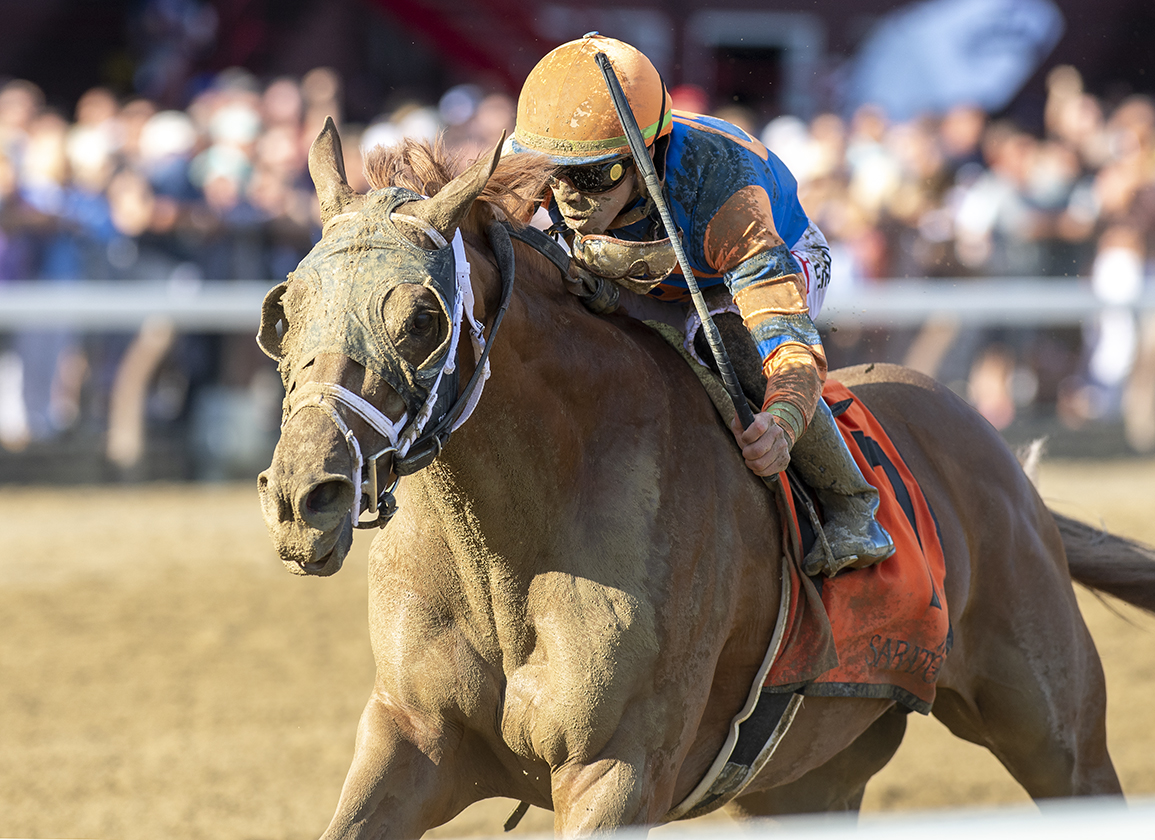 How very apt, that a Saratoga card also featuring a race named in her honor should culminate Saturday in a GI Runhappy Travers S. bearing a twin imprint of the legacy of Personal Ensign. Both Dynamic One (Union Rags) and Miles D (Curlin), one-two in the Curlin S. last month, trace their ancestry to the Hall of Fame mare: Dynamic One's mother is out of Personal Ensign's granddaughter Storm Flag Flying (Storm Cat); while Miles D's dam is Storm Flag Flying's unraced half-sister Sound the Trumpets (Bernardini).

But if nobody could be surprised to see fresh tendrils of class on the family tree developed by Ogden Phipps from Dorine (Arg) (Aristophanes {GB})–the Argentine matriarch imported to Claiborne in 1970–then few will perhaps be aware that both these colts also find a more literal “bond” in a second remarkable female.

For the dams of both Dynamic One and Miles D are among just eight mares grazing the pasture of River Bend Farm, on the banks of the Ohio River near Goshen, north of Louisville. And while the farm's owner Ina Bond is in a position at least to ensure quality, if not quantity, then it is pretty astonishing for so small a band of broodmares to account for two of the six rivals to Essential Quality (Tapit)–especially when you consider that Bond has already bred one Grade I winner at Saratoga this summer, in Coaching Club American Oaks winner Maracuja (Honor Code).

In fairness, this apparent Midas touch did not prevent the sale of Maracuja's dam Patti's Regal Song (Unbridled's Song) for just $50,000 at the Keeneland November Sale of 2019. But if that has turned into a windfall for Checkmate Thoroughbreds, then at that same auction Bond herself achieved a similar coup in buying an 8-year-old mare named Beat the Drums (Smart Strike) for $400,000. She must have been delighted that the Phipps Stable had been willing to cull a mare whose latest yearling had raised as much as $725,000 at the September Sale. After all, while Beat the Drums had shown little in two career starts, the Phipps Stable was glad to retain a stake in the yearling with his purchasers Repole Stable & St. Elias Stable. And this colt, of course, has turned out to be none other than Dynamic One.

Beat the Drums, moreover, has started to pay her way already. The Honor Code colt she was carrying that November was sold as a yearling to Centennial Farms for $260,000; Bond is very pleased with her weanling colt by Ghostzapper; and the mare is in meanwhile foal to Street Sense.

Miles D, for his part, similarly helped to recoup Bond's investment in his dam. Sound the Trumpets had cost $675,000 at the Keeneland November Sale of 2017, with the bonus of a Curlin cover. The resulting foal was Miles D, who was sold through Denali to White Birch Farm as a September yearling for $470,000.

The next foal out of Sound the Trumpets, a Pioneerof the Nile colt, did not achieve quite the same traction, as a $120,000 RNA, and has been retained to race. “He's called Trumpets Blare, he's with Ian Wilkes and just getting ready to run shortly,” explained Bond, adding that Sound the Trumpets was given this cycle off after the late spring delivery of a fine colt by Medaglia d'Oro. The mare, after all, is still only eight.

“She also has a [Quality Road yearling] filly, that I think I'll keep,” Bond said. “I think I'd like to keep any fillies from that family. It just keeps producing, including in the last couple of years, not just runners but producers as well. And Sound the Trumpets is an extremely good-looking mare. We're very careful always to seek good conformation, because if they have an injury you're lost. Frankly I'm more of a commercial breeder than a racer, so I always try to get correct broodmares with a really strong pedigree–not just 'what have you done for me lately', the way a lot of people go for the hot new stallions. I spend a lot of time and get a lot of help doing the matings.”

There is hardly a stronger maternal line in the Stud Book, of course, than the sequence of three consecutive Breeders' Cup winners comprising Personal Ensign, My Flag (Easy Goer) and Storm Flag Flying. But if anyone should believe in pedigree, it is Ina Bond. For her own “page” is one of the most resonant in Kentucky: her great-grandfather George Garvin Brown founded Brown-Forman–think Woodford Reserve, Jack Daniels–and her grandfather Owsley Brown and father W.L. Lyons Brown both served as chairman. Bond in turn inherited an energetic commitment to both corporate and civic service, giving her time to a bewildering variety of business, community, educational and charity institutions. Now a septuagenarian, she admits that for much of her life, she has been too distracted to make the most of the sanctuary she has always relished on the farm since its acquisition in 1990.

“I got kind of overwhelmed,” she reflected. “I used to do a lot of volunteer work and was on a lot of different boards, commercial and non-commercial, I just got very busy and was always playing catch-up. Nowadays there are so many more tracks, so many horses and sires, everybody loves the betting. But it's a good thing, I suppose: it seems like whatever is going on in the world, the market for horses is very strong.

“I was always fascinated by horses, right from when I was little; in fact, I think I was in a horse show when I was in first grade. My mother was a good friend of Warner Jones, and I bought River Bend Farm from his son-in-law. It's a beautiful farm, but when I was starting out, the market was really bad. But though I had just a few mares, that first year one of them got us the second top price at the September Sale.

“I lived on the farm and it got me out a little bit, away from all these other things I was doing. But I also had children, and then eight grandchildren, as well as all those other different things stopping me from getting out with the horses as much as I'd like. But thankfully I did get some help. I have a nice crew who take care of the mares and foals; they never missed a day this summer no matter how hot it's been. And my farm manager Larry Weeden has helped me for 30 years; he's very good.”

Nurturing pedigrees is itself a task of conservation, and that is an area that has impassioned Bond's son Austin Mussulman–notably in the restoration of Ashbourne Farms in Oldham County, long part of the family and now a wedding, meeting and entertainment venue, securing the habitat alongside Harrods Creek. His wife Janie, meanwhile, comes from another storied Kentucky farm in Buck Pond, through which Maracuja–bred in partnership by Bond, her son and daughter-in-law–was sold as a Saratoga yearling for $200,000.

Buck Pond stands a surprise Travers winner in V.E. Day (English Channel) and now Bond, her family and her friends can root for another. The scrupulous standards of this boutique operation are certainly commensurate with the task facing Dynamic One and Miles D. Auspiciously, moreover, Bond reckons she has seldom had young stock on the farm of greater elegance and ease of motion than now. Look out, then, for the first foal of the young Ghostzapper mare Persephone's Dawn, an Into Mischief filly presented by Denali as Hip 488 at Keeneland September.

Aristocratic as these bloodlines are, any underdog can take legitimate inspiration from Bond's Saratoga summer: one mare cheaply culled after producing a subsequent Grade I winner, but promptly replaced by one whose own yearling son was even then embarking on a career that has meanwhile already taken in a shot at the Derby.

“That's what makes this business so attractive,” Bond observes. “You never know. When I sold the dam of Maracuja, she hadn't really produced much, but now she has a Grade I winner. I'm not a great big farm, like the ones around Lexington. We're not Juddmonte or Darley. I've basically been a small commercial breeder for 30 years. So needless to say, I'm quite excited by the Travers, though the competition is huge. I did not raise Dynamic One, but he's from that wonderful family; and I know Chad Brown is a great trainer, and he wouldn't have Miles D in there if he didn't think he had a shot, I think he really likes that colt. As I say, I've always been a small player. So this is a big deal for me, and I'd be thrilled if either of them were to be placed–or even give everyone a big surprise and win.”