A Second French Title For Siyouni 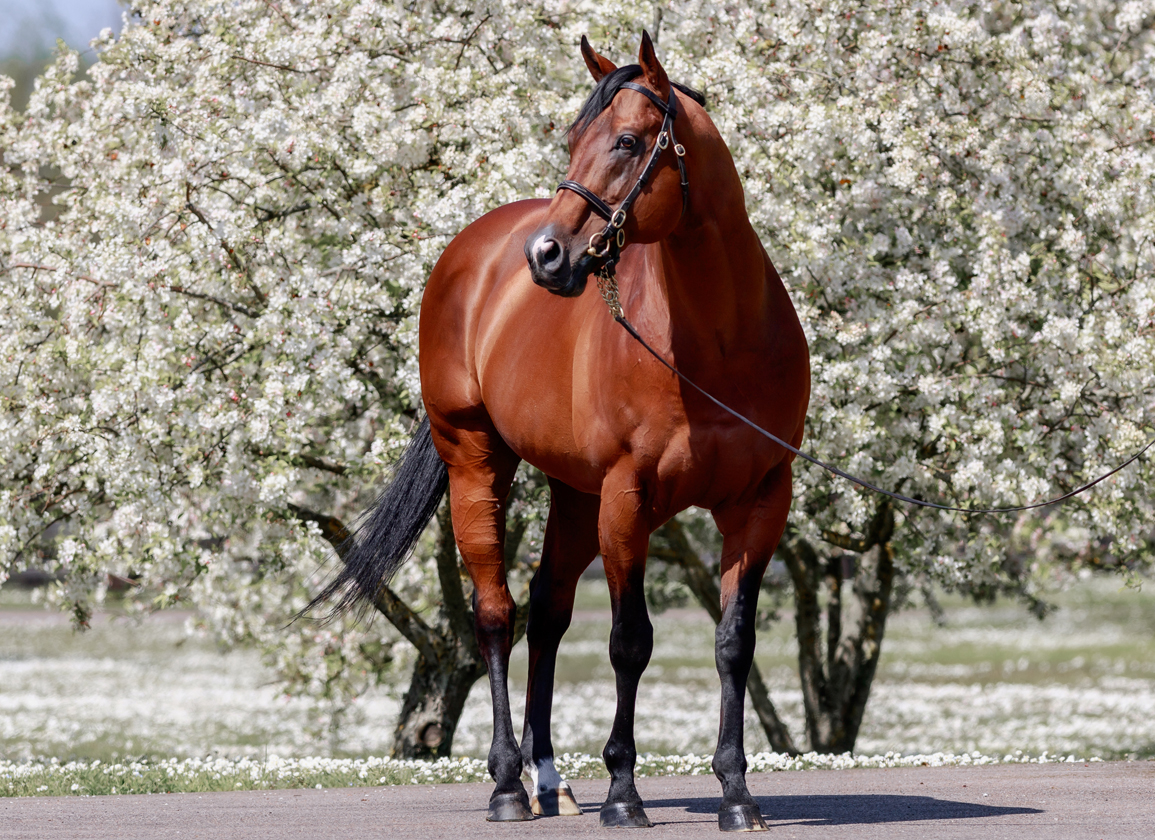 If having the winner of the Prix de l'Arc de Triomphe counted as a breakthrough moment for Siyouni (Fr) in 2020, his reputation climbed higher still as his son St Mark's Basilica (Fr) romped through his Classic year, winning the Poule d'Essai des Poulains, Prix du Jockey Club, Eclipse S. and Irish Champion S. on his way to becoming the top-rated horse in the world in 2021. Both he and Sottsass are now residents of the Coolmore stallion barn, where they will be given plenty of opportunities to attempt to establish Siyouni's reputation as a sire of sires.

Until Sottsass came along, the Aga Khan Studs' Siyouni had been best represented by his daughters. Ervedya (Fr) became his first Group 1 and Classic winner, Laurens (Fr) advertised his abilities to a wider audience with her six Group 1 wins in Britain, Ireland and France, while Etoile (Fr) took it a step further with a Grade I strike in Canada, and Dream And Do (Fr) has more recently enhanced his Classic roll of honour. What is clear is that Siyouni is an extremely accomplished sire, and there is plenty to suggest that as his reputation has grown, along with his stud fee–from €7,000 in 2011 and for the next three seasons to a high of €140,000 since 2021–then so will his achievements on the back of bigger and higher-quality books.

At this relatively early stage of his career, Siyouni has been represented by just one stakes winner as a broodmare sire, courtesy of the Deauville Listed winner Hurricane Dream (Fr) (Hurricane Cat), and there is surely hope for the Christophe Ferland-trained Times Square (Fr) (Zarak) to build on her juvenile season which saw her finish second in the G1 Prix Marcel Boussac. But in a year in which he was also represented by the Group winners Seachange (Fr), Wally (Ire), Sacred Life (Fr), Policy Of Truth (Fr), Acer Alley (GB), Mise En Scene (GB) and Who Knows (Fr), taking his lifetime tally to 57 stakes winners, it is safe to say that Siyouni is already paying a handsome tribute to his much-loved sire Pivotal (GB), who died in November.

Another stallion sadly lost in 2021 was the German champion sire Adlerflug (Ger). Like Siyouni, he had secured his first championship in his native country in 2020, and he repeated that feat 12 months later, as well as finishing runner-up in France. In 2020, Adlerflug had the first and second in the G1 Deutsches Derby, In Swoop (Ire) and Torquator Tasso (Ger). The former went on to run second to Sottsass in the Arc that year, but his 2021 season was cut short in July after four runs, including a further Group 2 and Group 3 success. Torquator Tasso picked up the baton as it was announced that In Swoop would be retired to Coolmore's National Hunt division, and the final two races of the year for Gestut Auenquelle's colour-bearer and future stallion resulted in victories in the G1 Grosser Preis von Baden and the Prix de l'Arc de Triomphe.

Adlerflug had just 29 runners in France, resulting in 12 winners of 22 races, but Torquator Tasso's prize-money haul from Europe's richest race was enough to secure his sire the runner-up spot in the stallion table.

During a decade in French breeding when some classy stallions have emanated from some less-than-obvious sources, Wootton Bassett (GB) has been one of the great success stories. Chapter two of his stud career is currently being written in Ireland at Coolmore, where he has stood since last year following nine seasons at Haras d'Etreham. He too has had an enormous upturn in fee, from a starting price of €6,000, to a low of €4,000 in 2014 and his current high of €150,000. That of course has been fanned by the flames of success, and Wootton Bassett enjoyed another good year, with Prix Marcel Boussac winner Zellie (Fr) and Incarville (Fr) two new Group 1 winners, taking his tally to five, while Royal Patronage (Fr), Atomic Jones (Fr), Ilaraab (Ire) and Wootton Asset (Fr) were new Group/Graded winners outside France.

Wootton Bassett has 44 stakes winners to his name from eight crops of racing age, and it is worth remembering that none of his first four crops of foals exceeded 50, with his smallest, in 2014, numbering just 18. In his first season at Coolmore he covered 244 mares. Expect bigger and better things to come.

With 59 winners in France, and Skalleti having provided a first Group 1 success, Haras de Colleville's Kendargent (Fr) was fourth in the French sires' table for 2021.

It is also worth keeping an eye on Kendargent's growing profile as a broodmare sire, with the G1 Champion S. winner Sealiway (Fr) (Galiway {GB}) being his leading representative in this regard, along with the G1 Deutsches Derby winner Sisfahan (Fr) (Isfahan {Ger}).

The winner of the G1 Grand Prix de Paris and third in the Arc, Hurricane Lane (Ire) helped to propel Britain and Ireland's champion sire Frankel (GB) into fifth place in the French table, just ahead of Sumbe's Le Havre (Ire). The latter's daughter Wonderful Tonight (Fr) bowed out in August before she was able to meet her end-of-year appointment in the Arc, but she did add a further two Group 2 wins to her tally of the previous year, winning at Royal Ascot and Glorious Goodwood.

These of course did not count towards Le Havre's tally in France, but Glycon (Fr) took the G2 Prix de Deauville and Waliyak won the G3 Prix Bertrand de Tarragon. The Sir Michael Stoute-trained Ville De Grace (GB) is a filly to keep an eye in in 2022 following her win in the G3 Pride S. at Newmarket in the autumn.

Outside the leading contenders, it is also worth noting the five stakes winners for Intello (Ger) in France in 2021. He remains at Haras du Quesnay in 2022, having served two years at a time when alternating between Cheveley Park Stud and Quesnay for the first eight seasons of his stud career, and his fee for this year has been dropped to €8,000, down from a high of £/€25,000. Bubble Smart (GB), Dawn Intello (Fr) and Adhamo (Ire) were all Group 3 winners for him in France, while Waldbiene (Fr) won Germany's G2 T von Zastrow Stutenpreis.

The posthumous success of Adlerflug during the 2021 season has already been referenced above and his untimely death in April after covering a mare at the stud where he was born, Gestut Schlenderhan, will continue to be lamented in Germany and beyond. The son of In The Wings is champion for the second year running, with his 28 winners led by Torquator Tasso, whose major success at home came in the Grosser Preis von Baden. Outside Germany, Adlerflug's leading runners in 2021 were In Swoop and the G2 King Edward VII S. winner Alenquer (Fr).

The first crop of Adlerflug's fellow German Derby winner Isfahan (Ger) were only three in 2021, but the victory in that same Classic of his son Sisfahan (Fr) helped to put the Gestut Ohlerweiherhof resident in second place in the German sires' table.

Sisfahan, who was runner-up to Torquator Tasso in the Grosser Preis von Baden, is reported to be heading to the Saudi Cup meeting in February for Germany's champion trainer Henk Grewe.

Soldier Hollow (GB) has just turned 22 and has previously been champion sire in Germany on three occasions. This time around he had to settle for third, but he sired the most winners (43) and highest number of stakes winners (nine). The diminutive son of In The Wings (GB) remains a huge credit to Gestut Auenquelle and to his owner Helmut Von Finck.

Another sad loss to the German stallion ranks and to Gestut Etzean in 2021 was Isfahan's sire Lord Of England (Ger). The 18-year-old was represented by another Classic winner in the last year of his life in the Preis der Diana winner Palmas (Ger).

Etzean has also been home for the last four years to the veteran former multiple champion sire Areion (Ger). The son of Big Shuffle turns 27 this year and had the valuable BBAG auction race winner Mister Applebee (Ger) among his leading performers of last year.

The Etzean stallions featured prominently in the sires' championship, with Amaron (GB), a son of Shamardal whose eldest runners were four in 2021, finishing sixth in the table. He will be joined at stud in 2022 by the Group 1 winner Japan (GB), who becomes the first son of Galileo (Ire) to stand in Germany.

A German sire of whom we could hear more this year is Guiliani (Ger), a son of Tertullian out of a full-sister to Getaway (Ger). Like Isfahan he had his first 3-year-old runners in 2021 and while Guiliani is yet to make a major impression, a notable member of his second crop is the Group 3 winner Tunnes (Ger), a half-brother to Torquator Tasso who is currently favourite for the Deutsches Derby.

Arcano (Ire) left Derrinstown Stud for Italy in 2016 and having spent the intervening years at Allevamento di Besnate, just north of Milan, he is now champion sire in his adopted country for the first time. His 26 winners included the G2 Oaks d'Italia heroine Eulaila (Ity), and she is out of a mare by the  GII Breeders' Cup Juvenile Turf winner Pounced, who has stood at the same stud for his entire career and is also now represented in the stallion ranks by his Group 2-winning son Full Drago (Ity), who had his first juvenile runners this year.

Second in the table was another former Allevamento di Besnate resident and Shadwell runner, Mujahid. Arcano has recently been joined at the stud by two more Shadwell-owned stallions, Mukhadram (GB) and Adaay (Ire).

The G1 July Cup winner Sakhee's Secret (GB) died in November at the age of 17. Having moved to Italy's Allevamento Si Fra in 2015, he was champion sire in 2019 and 2020, and finished fourth in the table in 2021, just behind Kendargent, who was represented by the Italian Derby winner Tokyo Gold.